Top of the Pops what I Always Wanted

Simon Bates is the host tonight for the 16th September 1982 edition of Top of the Pops, which was originally watched by 8.5 million viewers. 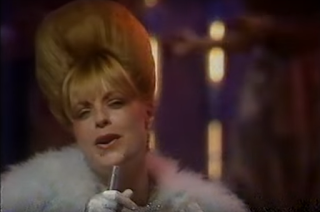 Mari hopes she hasn't misjudged the height of the Top of the Pops studio ceiling..

(36) MARI WILSON – Just What I Always Wanted
Mari and the boys get the show off to a hair raising start tonight with what became her only top ten hit when it peaked at number 8.

(5) THE JAM – The Bitterest Pill (I Ever Had To Swallow) (video)
Lots of snogging and discontented brides in a video that oddly reminds me a little of the one for Wham's Last Xmas, though without all the xmassy stuff. Number 2 was the peak.

(28) SIMPLE MINDS – Glittering Prize
An alarmingly anemic Jim Kerr sings this full blooded follow-up to Promised You a Miracle, which became the band's second top 20 hit of the year when it made it to number 16.

(24) SHAKATAK – Invitations
"One of the best live bands around" our host informs us and they certainly get the crowd going, though the song got no higher in the charts.

(14) TALK TALK – Today
Also edited out of the early showing, it was at its chart peak.

(22) ADAM ANT – Friend Or Foe (video)
Another great video from Adam Ant, with a tune going back to his earlier sound, this was his penultimate top ten hit, reaching number 9.

(17) CARLY SIMON – Why
Zoo do some quite painful looking ballet pirouettes to Carly's first hit for five years, with Chic lending a helpful hand to get this up to number 10.

(1) SURVIVOR – Eye Of The Tiger (video)
Third of four weeks at number one.

(8) GRANDMASTER FLASH & THE FURIOUS FIVE – The Message (crowd dancing) (and credits)
At its peak.