Church of Top of the Pops

Dearly beloved, we are gathered here tonight, Thursday April 7th 1983, all 11.45 million of us, to witness a live edition of Top of the Pops, in the presence of Simon Bates, Peter Powell, and the Kids from Fame! 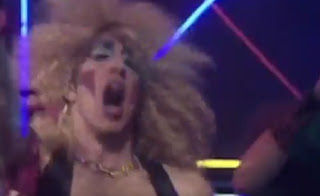 Dexys Midnight Runners – “The Celtic Soul Brothers” (24)
Originally released a year earlier but failed to make the top 40, this re-release fared better, peaking at number 20, and it was the band's penultimate hit, though we'd have to wait over three years for their final one.

Culture Club – “Church Of The Poison Mind” (9) (video)
The first single from their forthcoming number one album Colour by Numbers, and helped out on vocals by Helen Terry, Church of the Poison Mind peaked at number 2.

JoBoxers – “Boxerbeat” (3)
This punchy tune was now at its peak.

Michael Jackson – “Beat It” (30) (video)
The follow up to Billie Jean, and the third single from Thriller, peaked at number 3

F.R. David – “Words” (21)
This was FR David's only top ten hit, peaking at number 2, and helped out here in the studio by an energy efficient dance routine from Zoo.

Nick Heyward – “Whistle Down The Wind” (15)
Braving a second live show after missing his cue last time, but practice makes perfect and Whistle Down the Wind went up two more places.

Cry Me a Top of the Tops 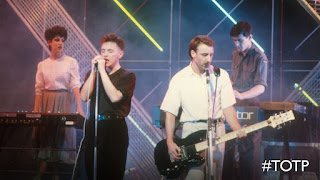 Where's Johnny Pearson's orchestra when you need them?

New Order – “Blue Monday” (17)
A very brave start to the show this week with a commendable totally live performance of Blue Monday, though it also highlighted why most acts preferred to mime! The first of seven top ten hits for the band, eventually peaking at number 9 (but not until September!) and spending 38 weeks in the chart.

U2 – “Two Hearts Beat As One” (24)
This second single from their number one album War, peaked at number 18.

Kajagoogoo – “Ooh To Be Ah” (20)
This slightly odd song was the follow up to Too Shy, and the second of three singles from their top five album White Feathers, Ooh to be Ah peaked at number 7. And nice purple bin bag trousers sported by Limahl.

Tracey Ullman – “Breakaway” (18)
The first of three top ten hits for Tracey, Breakaway was a cover of an Irma Thomas b-side from 1964, it reached a very impressive number 4 for Miss Ullman. Richard Skinner and Steve Wright clearly enjoying her hairbrushes for microphones performance.

Duran Duran – “Is There Something I Should Know?” (1) (video)
Second and final week at number one. Then who should appear in the studio but non other than Sid Snot ~ and the Kenny Everett Television Show was on BBC1 next.

Kenny Everett – “Snot Rap” (27) (audience dancing/credits)
Kenny's only other hit was Captain Kremmen, which made number 32 in 1977, Snot Rap fared better, running all the way to number 9 with its Barry Cryer double entendres. 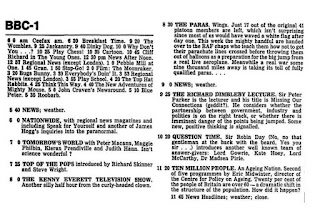 Is There Something Top of the Pops Should Know?

This live edition of Top of the Pops from March 23rd 1983 was broadcast on a Wednesday night to make way for A Song For Europe on the Thursday, won by Sweet Dreams featuring studio cheerleader Carrie Grant. 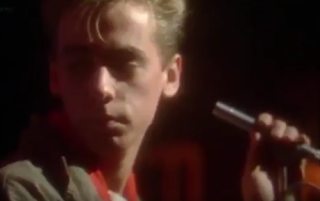 JoBoxers – “Boxerbeat” (21)
Looking like a cross between Madness and Dexys Midnight Runners, and making their debut on the show with the first of two knockout top ten hits, Boxerbeat landing the biggest punch reaching number 3.

Orange Juice – “Rip It Up” (9)
A second studio performance, helped out a little this time by Zoo, Rip it Up went up one more place.

Big Country – “Fields Of Fire (400 Miles)” (31)
Another debut on the show tonight, though singer Stuart Adamson had of course previously been on the show with The Skids. The first of four top ten hits, peaking at number 10.

Nick Heyward – “Whistle Down The Wind” (26)
Despite the nervous start and the missed cue, this was a terrific first solo single from Nick after leaving Haircut 100, and the first of three top 20 hits from his number 10 album North of a Miracle, peaking at number 13.

Altered Images – “Don’t Talk To Me About Love” (12)
Dancing her way through the jungle of streamers, this song became Clare and the boys' third and final top ten hit, peaking at number 7.

Duran Duran – “Is There Something I Should Know?” (1)
Straight in a number one, their first of two chart toppers. And this performance was pre-recorded three weeks prior to the show!

David Joseph – “You Can’t Hide (Your Love From Me)” (13) (+ credits)
We conclude with a studio performance, aided by Zoo once more, but this song was now at its peak. 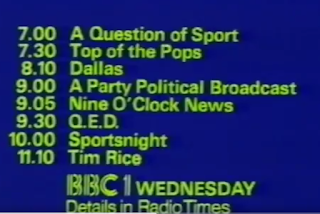 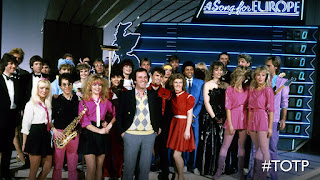 Top of the Pops in Blue 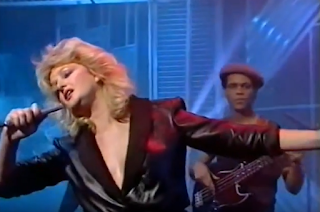 Come on now, own up, who's nicked my vest?

Bananarama – “Na Na Hey Hey Kiss Him Goodbye” (5)
Its a hello rather than a goodbye really as Bananarama get tonight's show underway, but this song went up the chart no further.

The Style Council – “Speak Like A Child” (6) (video)
Going back to the 60's and straight in at number 6 for the Style Council's debut single, which went up two more places.

Mezzoforte – “Garden Party” (29)
Tony informs us that their album Surprise Surprise costs £15 in their native Iceland, so we're lucky to live in the UK! Garden Party became the band's only top 30 hit, peaking at number 17.

Ultravox – “Visions In Blue” (30) (video)
Quite a saucy video here, and a seemingly odd choice for a single, but it did get to number 15, so maybe not so odd after all.

Bucks Fizz – “Run For Your Life” (21)
Going hell for leather here with a slightly scary song that peaked at number 14.

Joan Armatrading – “Drop The Pilot” (28)
Making her first appearance in the studio since 1976, which of course we saw in the early days of these re-runs (is that a sort of double nostalgia now?) Drop the Pilot peaked at number 11 and was Joan's final top 30 hit.

Bonnie Tyler – “Total Eclipse Of The Heart” (1)
Second and final week at number one.


Next up is the live edition form Wednesday March 23rd 1983 that flashed up at the end of tonight's credits.
Posted by Angelo at 13:03 76 comments:

You Can't Hide (Your Top of the Pops from Me)

A big thanks this time goes to Calvin Henderson for making this edition of Top of the Pops from March 10th 1983 available here at Youtube.

It won't be shown on BBC4 due to some ridiculous situation regarding Mike Smith's contract. 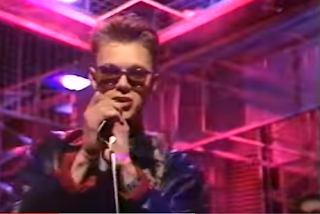 Contract issues? Rip it up and start again!

Orange Juice – “Rip It Up” (22)
The band's breakthrough hit was to be their only top ten hit, indeed their only top 40 hit, when it peaked at number 8.

Blancmange – “Waves” (21)
Went up two more places before being all washed up.

Bonnie Tyler – “Total Eclipse Of The Heart” (1) (video)
The first of two weeks for Bonnie's only number one single, taken from her number one album Faster Than the Speed of Night.

Thompson Twins – “Love On Your Side” (9) (audience dancing/credits)
At its peak.

Top of the Pops Engineering

It's suddenly March 3rd 1983, and an edition of Top of the Pops which failed to make BBC1's own top ten this week. 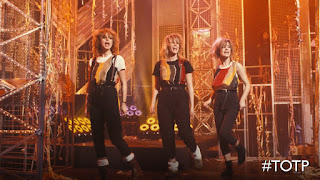 Now did you remember to write down the name of the song for John.....? 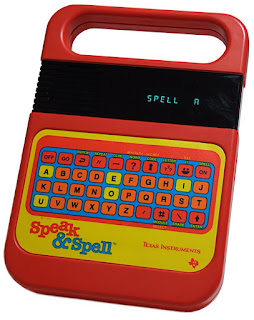 And next, 'by popular demand' we get the return of the 'Top Ten Video Show' which at least gives BBC4 viewers a chance to catch up with some Yewtreed classics like Sweet Dreams Are Made of This and Total Eclipse of the Heart. 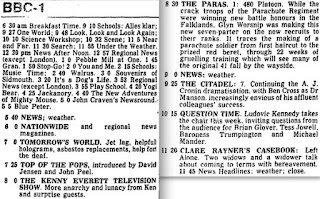 
So we run into another problem now, with the edition from March 10th 1983 being co-hosted by Mike Smith, so BBC4 will skip that one and show March 17th instead.
Posted by Angelo at 12:34 36 comments:

Get the Top of the Pops Right

BBC4, unfortunately, are getting it wrong and will not be screening the 24th February 1983 edition of Top of the Pops, so a huge thanks goes to Gia, for the following link here at WeTransfer. 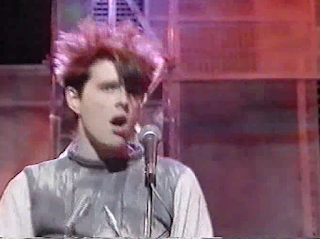 What? They still won't show DLT?

Michael Jackson – “Billie Jean” (2) (video)
Andy Peebles gets it right, this will be next week's number one.

Thompson Twins – “Love On Your Side” (12)
Went up three more places.

Phil Everly & Cliff Richard – “She Means Nothing To Me” (29)
A rare outing for Zoo here treating us to some leotard acrobatics. The song peaked at number 9.

Eurythmics – “Sweet Dreams (Are Made Of This)” (21)
Its three years since we last saw Annie and Dave, and now the Tourists have been replaced by the Eurythmics, performing this classic song that peaked at number 2.

Bonnie Tyler – “Total Eclipse Of The Heart” (14)
Andy Peebles gets it right again, here's the song that would deny the Eurythmics the number one spot, and our first sighting of Bonnie in four years. It probably took her all that time to squeeze into those leather trousers!

Depeche Mode – “Get The Balance Right” (22) (audience dancing/credits)
Peaked at 13.

Top of the Pops of Love

Whilst Ken Barlow and Mike Baldwin were in the middle of fighting for the love of Deirdre on ITV, Gary Davies and Peter Powell were happy to share Top of the Pops between them on February 17th 1983. 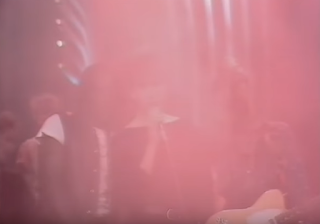 Wham! – “Wham Rap! (Enjoy What You Do)” (8)
Its foggy in the studio tonight but Wham get us off to a bright start, although Wham Rap got no higher in the charts.

Icehouse – “Hey Little Girl” (34)
'Australia's biggest band' on next with what became their only top 30 hit when it peaked at number 17.

Musical Youth – “Never Gonna Give You Up” (16) (video)
The band's second and final top ten hit, which peaked at number 6.

Haysi Fantayzee – “Shiny Shiny” (23)
Peter predicts this will be the duo's biggest hit but it peaked at 16, making it their second biggest, of four.

The Fun Boy Three – “Tunnel Of Love” (14)
Terry looking as happy as ever to be here, Tunnel of Love went up four more places. 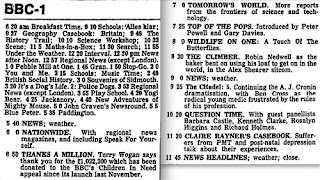 
Next then should be February 24th 1983, but quite incredibly BBC4 are still not showing DLT editions, for goodness sake! So instead they are skipping to March 3rd.
Posted by Angelo at 12:48 93 comments:

Top of the Pops on Your Side

It's February 10th 1983, and tonight's edition of Top of the Pops was the eighth most watched show on BBC1 this week, with 11.75 million viewers. 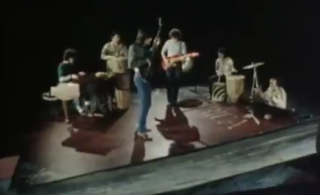 Good news lads, we have a booking tonight!

The Belle Stars – “Sign Of The Times” (3)
The girls get the show underway but Sign of the Times got no higher in the charts.

Thompson Twins – “Love On Your Side” (27)
Making their debut on the show with what would be the first of three top ten hits for the trio in 1983, when it peaked at number 9. But edited out of the 7.30 showing.

Toto – “Africa” (19) (video)
With their first hit since Hold the Line in 1979, (and seemingly with Chas from Chas and Dave on lead vocals!) Africa became Toto's biggest success peaking at number 3.

Michael Jackson – “Billie Jean” (17) (video)
For many people, this is the point where Michael Jackson's career really took off ~ an all time classic video and soon to be number one hit.

Elvis Presley – “Jailhouse Rock” (29) (audience dancing/credits)
A number one in 1958, this 25th anniversary re-release peaked at 27. And provides a chance for the studio audience to show off their rock n roll dance moves!