Top of the Pops by Numbers

So here we are with the edition from the 17th January 1980 hosted by Simon Bates. It's quite a big show this stretching close to 45 minutes so BBC4 will no doubt have their editing scissors out to fit it into a half hour slot at 7.30pm.
And before we begin, let's take just a moment to remember the lovely Demis Roussos who passed away earlier this week. He may be gone but his performances and songs will indeed live forever and ever. 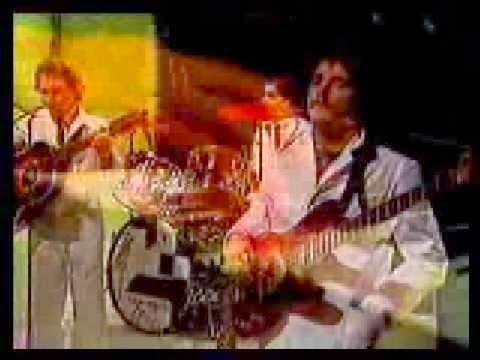 One arm is all you need


Bee Gees ~ play over the charts with the title track from their Spirits Having Flown album, the fourth single to be released from it, and the last we will see of them in the top 30 for seven years.

New Muzik ~ Picking up where Buggles left off (they shared the same drummer) in their white boiler suits, Living By Numbers would soon become their biggest hit.

Billy Preston and Syreeta ~ a third showing for this performance, now at its peak in the charts, but maybe this could have been edited out in favour of something we hadn't seen previously?

Sad Café ~ perform quite a strange little song which didn't quite make the top 30.

Sister Sledge ~ this energetic studio appearance wasn't enough to get this Chic written follow-up (I think.....) to Lost in Music into the top 30.

Madness ~ edited out but we have at least already seen this performance.

Positive Force ~ coming from the same stable as the Sugar Hill Gang, both groups then having their only top 20 hits at around the same time.

Dexy's Midnight Runners ~ make their debut on the show, combining it with a bit of swimming for Kevin Rowland by the looks of things - Dance Stance wasn't quite their breakthrough single, that one would come next.

Dr Hook ~ edited out but again we have seen this one before.

Amii Stewart ~ edited out, the Simon May penned Paradise Bird which perched at 39 in the charts.

Styx ~ were also edited out.  Babe did make the top 10 but this was the only show it was on, so your only chance to see it is to catch it later tonight or on iplayer.

Rupert Holmes ~ was edited out too, how could they? It made the top 30 so hopefully we'll get to see it yet.

The Pretenders ~ finally make it to number one, no doubt putting some brass in their pockets in the process, they do look pleased with themselves and who can blame them!

Jon and Vangelis ~ play over the credits with the first hit from this excellently unusual duo. The camera special effects seemed to get stuck half way through, maybe mesmerised by the song.
Next week is the 24th January 1980 hosted by Mike Read.
Posted by Angelo at 14:35 31 comments:

It's Different for Top of the Pops

It's January the 10th and David Jensen is the host for the second edition of Top of the Pops of 1980, with Christmas now firmly behind us and no more festive songs for eleven months! 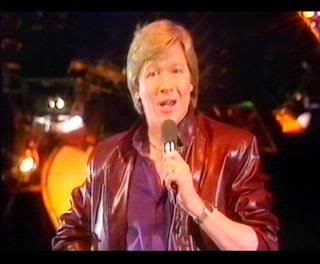 
Madness ~ play over the credits despite being on the show last week, but they did have two records currently in the top 30.

UFO ~ Young Blood was produced by George Martin but the record remained unidentified from the top 30.

Abba ~ at number 2 for a third week running, you'd have thought the kid with the runny nose in the video might have wiped it by now.

Rose Royce ~ were the only edit casualty tonight, with Is it Love You're After at its peak in the charts.

Joe Jackson ~ performs his excellent follow up to Is She Really Going Out with Him, and the Kid rightly predicts a big hit for this one.

Sheila B Devotion ~ or was it now Sheila and B Devotion? Disco classic Spacer was of course written and produced and played on by Nile Rogers and Bernard Edwards from Chic.

The Skids ~ on the same show again as their arch enemies, the Nolans, this seems to have been around an awfully long time for a record that only just made the top 20.

Legs & Co ~ are all jilted brides this week as they dance to Please Don't Go. KC himself is in the studio to tell the Kid how much he enjoyed watching them.

Dollar ~ a repeat showing of their performance from several weeks ago for another song slowly climbing the charts.

The Nolans ~ take over the studio as they show those spitters The Skids what a top 3 hit looks like.

Pink Floyd ~ it was the fourth and final week at number one for this classic song which David informs us was only the band's third hit single in 13 years.

Booker T and the MGs ~ play us out with Green Onions, a track originally recorded in 1962.

It's January the 3rd and the first Top of the Pops of the 1980's, hosted by Peter Powell, still with plenty of Christmas spirit to spare as he welcomes in not just a new year but a whole new decade... 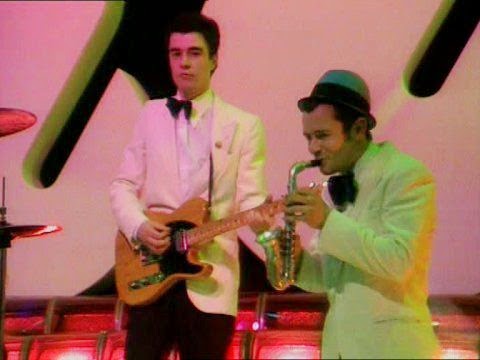 
The Clash ~ provide us with the first music of 1980, though they were still refusing to appear in person on the show.

Madness ~ so the first band we see are a white suited Madness, with 'their best single to date' My Girl.

Paul McCartney ~ at his chart peak now with Wonderful Christmastime, but festive records so quickly lose their appeal once the new year is here.

The Pretenders ~ a new studio performance of the song that would replace Pink Floyd at number one in a couple of weeks time.

David Bowie ~ Peter introduces it as John I'm Only Dancing Again, but it's the video of the 1972 original version of the song.

Boney M, The Beat and Fiddler's Dram were all edited out of the 7.30 show on BBC4, but all should be available to see later or on iplayer.

Kurtis Blow ~ another 'festive' offering and the second time now for one of these new fangled rap records on the show - must've given Will Smith a few ideas this one. Number 30 was its peak.

Billy Preston and Syreeta ~ a second showing for this classic love ballad duet climbing its way towards the top ten.

Legs & Co ~ begin their final full year on the show by disco dancing to Chic's last top 30 hit (not including remixes).

Dr Hook ~ had obviously recently become more available with this being their second TOTPs studio appearance since Christmas Day. Ray Sawyer looking a bit like a cowboy Bobby Ball, but with an eye patch instead of braces.

Pink Floyd ~ begin the 1980's still at number one in the charts having sold 'nearly a million records'.

Rose Royce ~ play us out with their final top 20 hit just two places below its peak in the charts.

The 1980's were introduced on BBC4's annual series curtain raiser with lots of cheery 80's faces including the chaps from OMD, the guy and gals from Human League, boys from the Piranhas and the Vapors and Adam Ant ~ indeed Phil Oakey looked far more cheerful than he ever did in the days when he had hair.

So 1980 then was a story of tape recorder rivalry, dropped drumsticks, borrowed wigs, disco that Elvis never did, musician union strikes, a revamped show, celebrity co-hosts and potential nuclear Armageddon. Quite luckily for us this year is that far fewer editions were hosted by Jimmy Savile, but unluckily the whole of June and July of 1980 was lost because of a musician union strike at the BBC, which ultimately saw the end of the TOTPs orchestra. Add to that the Christmas Day show which was co-hosted by JS, which means that (perhaps mercifully) we won't get to see the St.Winifred's School Choir keep John Lennon off the number one spot.

1980 is another fantastic year of music to look forward to and the Big Hits compilation provided a very tasty appetizer for the year ahead....... 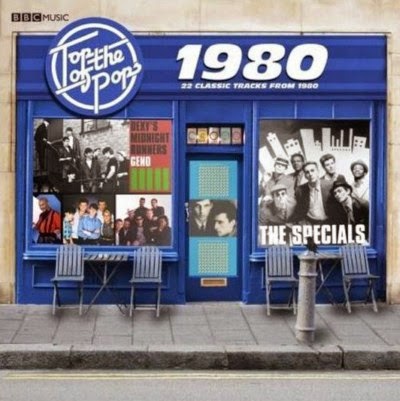