Top of the Pops When You Leave

And so an ensemble of Lenny Henry characters host the final edition of Top of the pops of 1984, introducing a selection of songs that didn't quite make it to number one, together with a handful that did. 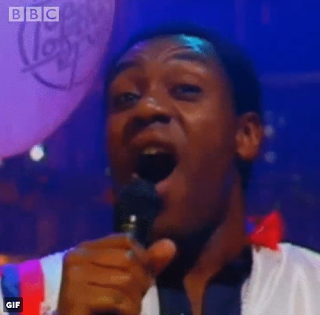 That's all for 1984 ~ Ohhhhhhhhh Kayyyyyyyyyy!

Spandau Ballet – “Only When You Leave”
Getting us underway with a song that peaked at number 3 in the summer.

Ultravox – “Dancing With Tears In My Eyes”
Also peaked at number 3 and their final top ten hit.

Slade – “My Oh My”
It made it to number 2 last Christmas.

Neil – “Hole In My Shoe”
A live vocal from Neil, adding amusing festive lyrics to his number 2 hit from the summer.

Chaka Khan – “I Feel For You” (video)
Her only number one hit.

Shakin’ Stevens – “A Love Worth Waiting For”
A number two from the beginning of the year.

Bronski Beat – “Smalltown Boy”
Their debut hit from the spring which peaked at number 3.

Paul McCartney – “No More Lonely Nights” (video clip)
Shame Paul didn't come into the studio to perform one of these songs instead of the video clips. This first one got to number 2.

Paul McCartney – “Pipes Of Peace” (video clip)
The first new number one hit of the year.

Bananarama – “Robert De Niro’s Waiting”
Made it to number 3.

The Flying Pickets – “Only You”
Dressed as choirboys this time to perform last year's Christmas number one.

Stevie Wonder – “I Just Called To Say I Love You” (video)
Stevie's only solo number one hit. This also highlights the folly of getting rid of the resident dance troupe. We've already seen this flying toast many times over now, but a Legs & Co routine here would at least have spread a tasty topping on it.


Next Friday sees the two launch shows of 1985, with 'The Story of' and 'Big Hits'.  So that means a new name is once again needed for the blog, and all suggestions are now very welcome!
Posted by Angelo at 14:38 26 comments:

Merry Top of the Pops-mas Everybody

It's December 24th and the Ghost of Top of the Pops Past has come to take us all back in time to Christmas Day 1973! 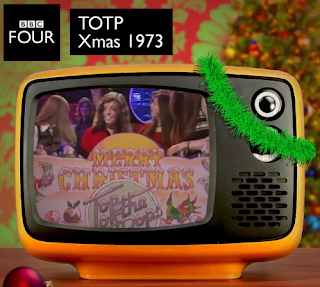 We wish you a Merry Christmas!

(-) DONNY OSMOND – Young Love (video)
With his first of three number ones.

(-) SUZI QUATRO – Can The Can
And the first of two number one hits for Suzi.

(-) SIMON PARK ORCHESTRA – Eye Level (Theme From The T.V. Series ‘Van Der Valk’)
Made it to number one in September 1973, but it was their only hit.

(-) THE SWEET – Blockbuster
Performing their only number one hit.

(-) DAWN feat. TONY ORLANDO – Tie A Yellow Ribbon Round The Old Oak Tree ®
This was Dawn's second of two number one hits.

(-) GILBERT O’SULLIVAN – Get Down (danced to by Pan’s People)
His second of two number one hits.

(-) GARY GLITTER – I’m The Leader Of The Gang (I Am)
His first of three number ones ~ though will be edited out of the show of course. But I haven't had chance to watch it yet!

(30) DAVID CASSIDY – Daydreamer (video)
His second of two number ones.

(-) 10cc – Rubber Bullets
With their first of three number one hits.

(-) PETERS & LEE – Welcome Home
Their only number one hit, taken from their huge number one album, We Can Make It.

(-) WIZZARD – See My Baby Jive
Performing their first of two number one hits.

(1) SLADE – Merry Xmas Everybody (and credits)
In the year when it was brand new, and it was their sixth and final number one hit.

A huge thanks from me to everyone who reads and contributes to this blog, your efforts and insights are always very much appreciated, and so I'd like to say to you all:

The Power of Top of the Pops

And so after a few weeks off, it seems the DJs are busy elsewhere, maybe having their office party, leaving the bands to introduce each other, as Top of the Pops returns to BBC4 and it's Christmas Day 1984! 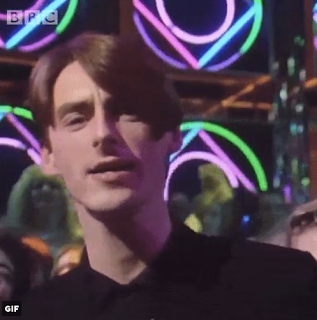 Tonight thank god its me instead of you!

Frankie Goes To Hollywood – “Two Tribes”
A mysterious voice introduces this seasonal cold war opener which was number one for nine weeks in the summer. And Holly seems to have a raccoon on his head.

Howard Jones – “What Is Love?”
A live vocal from Howard for his number two hit from the beginning of the year.

Nik Kershaw – “I Won’t Let The Sun Go Down On Me”
Performing his biggest hit, which rose to number two.

Culture Club – “The War Song”
Another number two here, the much maligned War Song, although personally I quite like it.

Thompson Twins – “Doctor Doctor”
Sneaking into the party with a lowly number three!

Jim Diamond – “I Should Have Known Better”
He only had the one week at number one, so its good to see him in the studio again.

Wham! – “Wake Me Up Before You Go-Go” (video)
Jim introduces Wham, explaining that George should have been in the studio, but was feeling under the weather ~ maybe a bit too much Xmas pudding!

Paul Young – “Love Of The Common People”
Paul's come as a lumberjack, but where are the Fabulously Wealthy Tarts?

Duran Duran – “The Wild Boys”
Time for seconds now, starting with this autumn number two hit. And after introducing his 'noisy dressing room neighbours', Paul Young helps them out in the chorus.

George Michael – “Careless Whisper” (video)
Again on video, shame he couldn't make it into the studio to perform this solo number one hit.

Frankie Goes To Hollywood – “The Power Of Love”
Holly has swapped the raccoon for a black dressing gown, but Paul seems to be sitting this one out, a song that made it to number one for just one week in December.

Thompson Twins – “You Take Me Up”
This time performing a number two hit from the summer.

Frankie Goes To Hollywood – “Relax”
They first appeared in the studio in January performing this tune, then it was banned, seemingly by Mike Read, but in time for Xmas, the power of Top of the Pops has now unbanned it allowing Frankie perform their third number one of the show.

Band Aid – “Do They Know It’s Christmas” (+ credits)
A very ambitious studio performance of the Xmas number one, that was very close to being quite brilliant ~ if only George had made it into the studio, and Bono hadn't mysteriously turned into Paul Weller. But everyone else is here, even Sting has made it in for his bit part, and Sade and Banarama and Marilyn and the Quo - pretty much the whole gang are here for a fabulous finale.