Passionate Top of the Pops

September arrives and the Top of the Pops 'party atmosphere' is very noticeable now with balloons, fancy hats, whooping and people in the audience who look like they can dance! And here's a question for you ~ which future Top of the Pops presenter was born on the very day this edition was first broadcast? 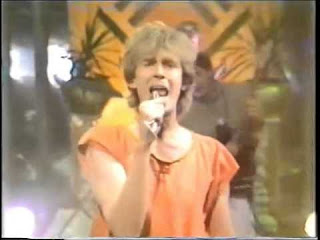 (40) John Foxx – “Europe (After The Rain)”
Despite several appearances on the show John never quite made the top 30. Number 40 was the peak of this latest effort. But edited out of tonight's 7.30pm slot.

(32) Bucks Fizz – “One Of Those Nights”
Already their third hit of the year, this one reached number 20. But again edited out of the 7.30pm showing.

(33) The Teardrop Explodes – “Passionate Friend”
The third and final top 30 hit for the group when it peaked at number 25.

(31) Dollar – “Hand Held In Black & White”
It was over a year and a half since their last top 30 hit and here the duo return having had a thorough 80's makeover which helped this one peak at number 19.

(29) The Pointer Sisters – “Slow Hand”
Peter Powell says that 'there is no show without Legs & Co' and this week the ladies do a tinselly routine around what looks like a giant doughnut to what became the first of three top ten hits for the Pointer Sisters when it peaked at number 10.

(1) Soft Cell – “Tainted Love”
The first of two weeks at number one for the duo.

(47) Funkapolitan – As Time Goes By” (+ credits)
Gary Numan now decides to turn up in the studio, but its too late they've already shown his 'film'! And now for the first time (I think?) we get a live band (and Legs & Co for a third time tonight) in the studio to play us out over the credits. This was Funkapolitan's only hit and it reached number 41.


Next is the 10th of September 1981 but this is a Jimmy Savile edition so won't be on BBC4. Instead we will see September 17th hosted by Steve Wright.
Posted by Angelo at 12:44 108 comments:

Wired For Top of the Pops

We have a more sedate pace of Top of the Pops 1981 for the next few weeks whilst Young Musician of the Year takes over the Friday slot, which is perhaps just as well because we are already at the end of August! 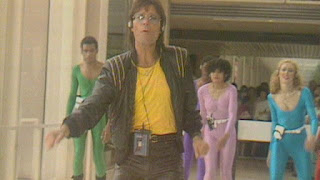 You can't catch me and my Walkman!

(18) Startrax – “Startrax Club Disco”
A somewhat embarrassed looking Bee Gees tribute band kick us off this week with a medley which was now at its one hit wonder peak.

(27) Cliff Richard – “Wired For Sound” (video)
Cliff gets his slightly unsteady skates on and takes this BA Robertson/Alan Tarney composition to number 4.

(2) Soft Cell – “Tainted Love”
They just had to wait one more week to reach number one. But edited out of tonight's 7.30 showing.

(28) The Rolling Stones – “Start Me Up” (video)
Bill Wyman, who was still in the top 20, goes back to his day job to help the Stones reach the top ten for the final time with Start Me Up which made it to number 7.

(5) ELO – “Hold On Tight”
Legs & Co looking very summery for this week's routine to another band having their final top ten hit, Hold On Tight went up one more place.

(12) Genesis – “Abacab”
Phil goes back to his day job on the drums to help Genesis to their third top ten hit, when this one reached number 9.

(1) Aneka – “Japanese Boy”
The only week at number one for Aneka's only hit, but she is joined here by geisha girl Legs & Co twirling their parasols.

(29) Modern Romance – “Everybody Salsa” (audience dancing/credits)
Climbing aboard the New Romantic bandwagon here's Modern Romance with their breakthrough hit which peaked at number 12.

Rainy Night in Top of the Pops

A very big thank you to John G and Neil B for making the DLT hosted edition of Top of the Pops from August 20th 1981 available on WeTransfer ~ http://we.tl/7DHUKBQsrH

This is quite a hot and sweaty show overall so that little bit of Georgia rain must've been very welcome! 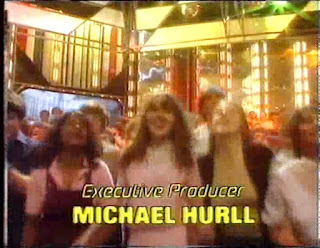 (25) Enigma – “I Love Music”
Another disco medley to get the show underway with Legs & Co leading the audience participation. This record peaked at 25.

(36) U2 – “Fire”
Making their debut on the show here are what would become one of the most successful bands ever, though Fire only went up one place higher.

(32) Siouxsie & The Banshees – “Arabian Knights” (video)
Despite her magic carpet, Siouxsie can't fly this one any higher into the top 30.

(30) Randy Crawford – “Rainy Night In Georgia”
Legs & Co take a break from medleys and go dancing in the rain this week helping Randy up to number 18.

(10) Lobo – “The Caribbean Disco Show”
Still in the grip of medley fever, and the sun shined on this one all the way to number 8.

(2) Royal Philharmonic Orchestra – “Hooked On Classics” (audience dancing/credits)
And we dance out with medley number three, which couldn't quite make it to number one.


The next edition is August 27th 1981 back on BBC4 with Richard Skinner.

Top of the Pops on Film

Even the BBC4 announcer sounded like they couldn't quite believe it was the 13th August 1981 already! 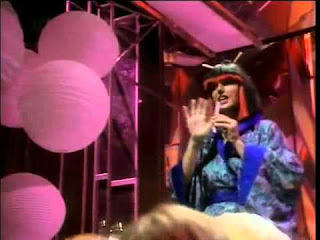 Has anyone seen my knitting needles?

(6) Duran Duran – “Girls On Film”
Getting the show underway for a second time with Girls on Film, with Simon Le Bon sporting a sort of sailor look this time. The song went up one chart place more.

(2) Royal Philharmonic Orchestra – “Hooked On Classics” (video)
The first of two black and white 'films' tonight, this one featuring lots of eccentric people and animals dancing in perfect time to the classical music medley, now at its peak in the chart.

(26) Soft Cell – “Tainted Love”
And so we reach the song that would become the biggest selling single within 1981, host Simon Bates did predict that Marc and David from Leeds would have a big hit with this Gloria Jones cover, and he was spot on, it would make it to number one in three weeks time.

(27) Startrax – “Startrax Club Disco”
Just the two medleys on this week's edition, and Legs & Co get the second one, which features the hits of the Bee Gees, where at one point they recreate their Tragedy routine from 1979, and once again a lucky boy is grabbed from the audience for a dance (with Gill I think?). The record made it to number 18. And unusually this week there was no number 28 because this record and Starsound's Stars of 45 vol 2 were both tied at number 27!

(19) Aneka – “Japanese Boy”
The second future number one on tonight's show - with Simon Bates pointing out that for a Japanese lady Aneka was rather tall and had a Scottish accent!

(1) Shakin’ Stevens – “Green Door”
Backed by an all green Legs & Co in another audience extravaganza, this was the third of four weeks at number one for Shaky's cover of the 1956 Frankie Vaughan number 2.

(23) UB40 – “One In Ten” (audience dancing/credits)
And the show ends with the fresh faces of 1981's youth sound tracked by UB40's mass unemployment lament.

Top of the Pops 1981 takes a well earned rest now for a couple of weeks on BBC4, returning with the edition from August 27th. Before then though for us there is the 20th August hosted by DLT.
Posted by Angelo at 13:33 77 comments:

For Your Top of the Pops Only

Many thanks here to both Manorak and Darnall 42 for making the edition from August 6th 1981 available on We Transfer. Here is the link, it is hosted by Jimmy Savile so obviously do not click it if you wish to avoid seeing him ~ 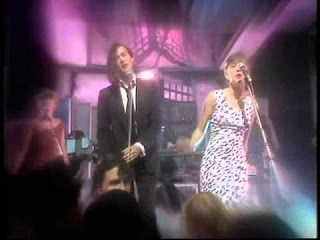 Darn it - Yewtreed yet again!

(16) Dexys Midnight Runners – “Show Me”
At its peak now in the charts.

(8) Sheena Easton – “For Your Eyes Only” (video)
Sheena's third and final top ten hit, now at its peak.

(36) Tenpole Tudor – “Wunderbar”
The follow up to Swords of a Thousand Men, made it to number 16 but was their final top 40 hit.

(27) Lobo – “The Caribbean Disco Show”
Again there are three medleys on this edition, Legs & Co take on the first of them, making pretty much their own video for the song, and it was obviously quite hot on set....
The record by the way made it to number 8 and was the band's only hit.

(29) The Human League – “Love Action (I Believe In Love)”
We've been so unlucky this year with the Human League constantly appearing on these yewtreed shows. One of the songs of the year, this became the band's first top ten hit when it made number 3.

(21) Visage – “Visage” (audience dancing/credits)
We end with Visage at its chart peak.

It's not an April Fool ~ we really have reached the end of July 1981 already! 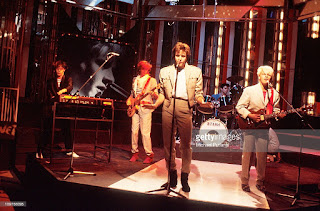 Why won't you show our video?

(23) Duran Duran – “Girls On Film”
Getting the show underway was the follow up to the relative failure Careless Memories, but this tune which is famed for its outrageous video, became the band's first top ten hit when it made it to number 5.

(35) Kim Wilde – “Water On Glass”
The third and final single from her top three debut album, Water on Glass made it to number 11.

(36) Bill Wyman – “(Si Si) Je Suis Un Rock Star”
He'd been on the 900th show as a guest, now here was one fifth of the Rolling Stones with a somewhat controversial song to say the least which made it to number 14.

(7) Royal Philharmonic Orchestra – “Hooked On Classics”
This week's Legs & Co routine, in nothing much of course, to the latest medley, and another that peaked at number 2.

(4) Stevie Wonder – “Happy Birthday” (video)
Peaked at number 2. And when we got bored of the video there was the audience and Legs & Co!

Next up is August 6th 1981, but it was hosted by Jimmy Savile. So the next edition on BBC4 will be the one from August 13th.