With a Little Top of the Pops From My Friends 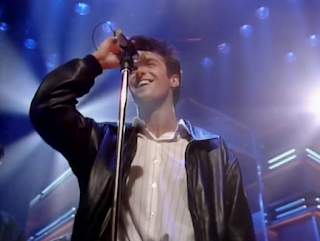 Wet a little help from my friends

Debbie Gibson – “Out Of The Blue” (19)
Girl next door Debbie gets tonight's show underway but the song got no higher.

LA Mix – “Check This Out” (13) (video)
With some nice touches of humour this was their only top ten hit and it peaked at number 6.

Ofra Haza – “Im Nin’Alu” (15)
Bringing some eastern promise (and a stack load of tellies) into the studio but like Debbie before her the song got no higher.

Hothouse Flowers – “Don’t Go” (11)
Making their studio debut but this was another song already at its peak.

Mica Paris – “My One Temptation” (17)
Another studio debutante and this song became her only top ten hit when it peaked at number 7.

She's Leaving Top of the Pops

Thursday evening at seven o' clock and the show begins - it's the 19th May 1988 edition of Top of the Pops! 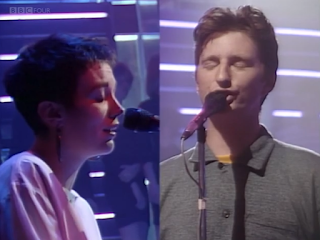 What did we do that was wrong?

Prefab Sprout – “The King Of Rock ‘N’ Roll” (14)
Getting tonight's show underway with what became their biggest hit when it peaked at number 7.

Derek B – “Bad Young Brother” (16)
Gives it some energy in the studio but the record was at its peak.

Aztec Camera – “Somewhere In My Heart” (17)
Performing their only top ten hit - it was a great tune and it peaked at number 3.

Hothouse Flowers – “Don’t Go” (22) (breaker)
They got their big break as the interval act on this year's Eurovision, and this song was their biggest hit peaking at number 11.

Billy Bragg with Cara Tivey – “She’s Leaving Home” (1)
Bravely performing totally live in the studio, this was the flip side of the Childline charity single, and was Billy's (and Cara's) only number one.

Liverpool FC – “Anfield Rap (Red Machine In Full Effect)” (3) (video/credits)
The Crazy Gang of Wimbledon had beaten them in the FA Cup final, and thankfully the record got no higher in the charts.

Top of the Pops Emotions

You just won't know whether to laugh or cry when you watch the 12th of May 1988 edition of Top of the Pops! 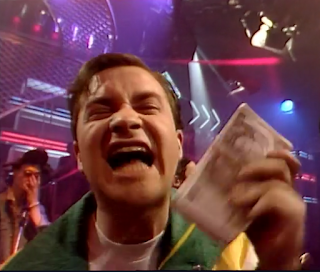 Wad of the Pops!

Harry Enfield – “Loadsamoney (Doin’ Up The House)” (4)
Cashing in on his popular Friday Night Live comedy character, this was Harry's only hit and number four was its peak.

The Adventures – “Broken Land” (23)
Making their studio debut and the song went up three more places.

Narada – “Divine Emotions” (16)
He'd had a number 8 hit in 1980 with I Shoulda Loved Ya, and now here he was in the studio eight years later with his second and final top ten hit, which also peaked at number 8.

Star Turn On 45 Pints – “Pump Up The Bitter” (12)
In the studio and they do seem to be doing live vocals, but the record got no higher, thank goodness!

Wet Wet Wet – “With A Little Help From My Friends” (5)
Will be number one next week.

Fairground Attraction – “Perfect” (1)
First and only week at number one.

Start Talking Top of the Pops

Quiet at the back please! It's time for the 5th May 1988 edition of Top of the Pops! 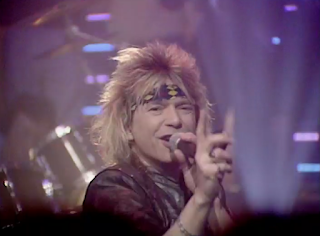 The ice-cream of the crop

Joyce Sims – “Walk Away” (24)
Joyce gets the show off to a frilly dress start but the song got no higher.

New Order – “Blue Monday ‘88” (10) (video)
It only seems like yesterday that this song was first in the charts, and then once again, and now here it is for a third time! This remixed version actually did best of all, and peaked at number 3.

Magnum – “Start Talking Love” (29)
Making their debut next are Birmingham's answer to Bon Jovi, performing what becam their biggest hit, and it peaked at number 22.

The Christians – “Born Again” (26)
They were studio regulars by now, and this song went up one more place.

S-Express – “Theme From S-Express” (1)
A new performance tonight for their second and final week at number one.

A Top of the Pops Supreme

I got the top of the hots for you

Pat & Mick – “Let’s All Chant” (15)
Getting us underway tonight is a former presenter, but it's all for charidee and it went up four more places.

Fairground Attraction – “Perfect” (12)
Making their group debut in the studio with a song that will be number one in three weeks time.

Bananarama – “I Want You Back” (5)
In the studio again for a second performace but the song was now at its peak.

Will Downing – “A Love Supreme” (16)
Making his studio debut and this John Coltrane cover went up two more places.

Top of the Pops's Prayer

Our father, who art at BBC TV Centre, give us this day the 21st April 1988 edition of Top of the Pops! Amen! 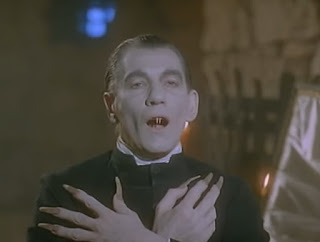 Ian gets his teeth into the song

S-Express – “Theme From S-Express” (3)
Will be number one next week.


George Michael – “One More Try” (14) (video)
This fourth single from his Faith album peaked at number 8.

Top of the Pops Cadillac

Pulling up into the studio tonight is the 14th April 1988 edition of Top of the Pops! 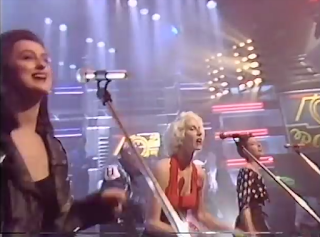 New girl on the block

Bananarama – “I Want You Back” (14)
Featuring new member Jacquie O'Sullivan, this song became their ninth of ten top ten hits when it peaked at number 5.

Climie Fisher – “Love Changes (Everything)” (3)
Went up one more place.

S-Express – “Theme From S-Express” (25) (breaker)
Will be number one in two weeks time.