We Have a Top of the Pops

It's May 6th 1982 and Simon Bates is making sure everyone knows he is hosting a live edition of Top of the Pops! 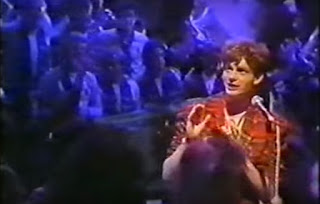 (31) JUNIOR – Mama Used To Say
Richard Blackwood's uncle gets the show underway, with what would become the first of two top ten hits when it peaked at number 7.

(34) DEPECHE MODE – The Meaning Of Love
Edited out of tonights early showing and even though it got to number 12 we won't get to see it again!

(2) ENGLAND WORLD CUP SQUAD – We’ll Fly The Flag
They threw everything into this, the star names like Keegan and Hoddle, together with half of British Airways' stewardesses and official England fan Ken Baily, but could this be the performance that won them the honour of being the 500th number one?

(32) TIGHT FIT – Fantasy Island
The follow up to their number one, and they are actually singing on it themselves this time, made it to number 5, but it was to be their final top 30 success.

(30) TOTTENHAM HOTSPUR F.A. CUP FINAL SQUAD – Tottenham, Tottenham
A second football song, this time its Chas & Dave and Spurs again - it was not as successful as last year's Ossies Dream though, peaking at number 19.

(13) SCOTTISH WORLD CUP SQUAD – We Have A Dream
Would you believe we now have a third football song on the show, this one being by far the most eccentric, fronted by a manic John Gordon Sinclair, and helped out with wacky sound effects from BA Robertson. It somehow made it to number 5.

(1) PAUL McCARTNEY & STEVIE WONDER – Ebony And Ivory (video)
A third and final week at number one, so very fitting that at the end of the video who should drop into the live studio (for the first time since late 1974) to say hello to Simon but Paul McCartney himself, with his wife Linda.

The next edition is May 13th 1982, but it is hosted by DLT so BBC4 are skipping it in favour of May 20th, which will be shown next Friday.

Ever So Top of the Pops

It's April 29th 1982 already and Richard Skinner is this week's host of Top of the Pops! 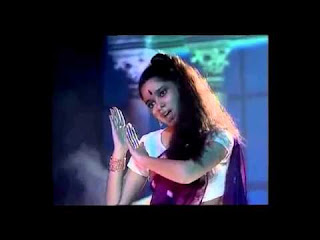 My appendix, right, was well swelled

(26) HOT CHOCOLATE – Girl Crazy
Getting an 80's Jane Fonda's Workout makeover, Hot Chocolate return to the studio after almost two years away, with a tune that peaked at number 7.

(2) BARDO – One Step Further
They lost to the Germans (and 5 others) at Eurovision and couldn't quite go one step further and top the charts. And also edited out of tonight's 7.30pm showing.

(17) SUZI QUATJOAN JETT & THE BLACKHEARTS – I Love Rock ‘N’ Roll (video)
Crikey, these American videos are getting even worse, someone needs to put another dime in the electric meter! This Arrows cover peaked at number 4.

(31) YAZOO – Only You
The debut of the fabulous Yazoo and our first sighting of post Depeche Mode Vince Clarke. This gorgeous song made it to number two and was the first of three top ten hits for the all too short lived duo.

(NEW) NICOLE – A Little Peace
Nicole Hohloch was just 17 when she became 1982's Eurovision winner and her song was soon to become the UKs 500th number one.

(16) MONSOON – Ever So Lonely
Former Grange Hill actress Sheila Chandra was another 17 year old on tonight's show, forming some lovely Indian dance shapes as Ever So Lonely made its way up to number 12.

(1) PAUL McCARTNEY & STEVIE WONDER – Ebony And Ivory (video)
Second of three weeks at the top for the 499th number one.

(34) ROCKY SHARPE & THE REPLAYS – Shout Shout (Knock Yourself Out) (and credits)
Our first sighting of this rockabilly lot for over three years performing what would be their final top 30 hit, peaking at 19.

Top of the Pops from a Bridge

Peter Powell hosts this week's Top of the Pops from April 22nd 1982! 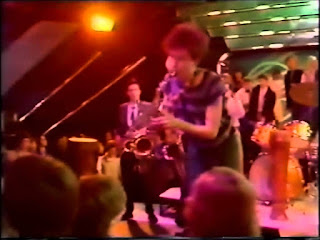 Have we done enough to get banned yet?

(3) PIGBAG – Papa’s Got A Brand New Pigbag
Last time we saw these naughty boys they closed the show, this time they open it, with their record now at its peak in the charts.

(17) BANANARAMA & FUN BOY THREE – Really Saying Something (video)
This cover version of the Velvelettes non-charter from 1964 fared better for this duo of bands when it peaked at number 5.

(8) ELTON JOHN – Blue Eyes
Live in the studio and (I do believe) a live vocal too, giving the performance that extra bit of edge. Though it got no higher in the charts.

(11) ENGLAND WORLD CUP SQUAD – This Time (We’ll Get It Right) (video)
Well they got it wrong again didn't they, and it was edited out of the 7.30pm showing!

(30) KIM WILDE – View From A Bridge
Peter was very keen to stress that this was Kim's fifth hit, wasn't he! And she'd ditched the tight jeans in favour of a little black dress too, as View from a Bridge reached number 16.

(26) DAVID BOWIE – Cat People (Putting Out Fire)
Zoo get to clamber over a climbing frame tonight that keeps bursting into flames! This Bowie single was from the 1982 movie, Cat People, and peaked at 26.

(22) SHAKIN’ STEVENS – Shirley
Flying in all the way from Canada to do a pretty feeble cartwheel in the studio, before falling into the audience at the end, this cover of the John Fred and the Playboys Band non-charter from 1959 reached number 6 for Shaky.

(1) PAUL McCARTNEY & STEVIE WONDER – Ebony And Ivory (video)
The first of three weeks at number one for this often derided and unjustly underrated song.

(10) SHALAMAR – I Can Make You Feel Good (crowd dancing) (and credits)
Peter wishes Bardo all the best for the Eurovision Song Contest on Saturday, and we play out with Shalamar's first top ten hit, which finally peaked at number 7.

Promised You a Top of the Pops

It's April 15th 1982 and David Jensen once again presents another live edition of Top of the Pops! 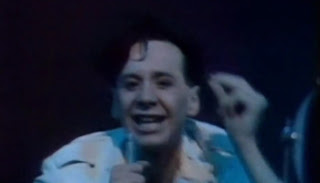 You won't forget about me!

(42) SPANDAU BALLET – Instinction
Getting the live show underway is Spandau Ballet with what would become the first of two top ten hits for them in 1982, when it peaked at number 10. Produced by Trevor Horn.

(6) ROXY MUSIC – More Than This (video)
That stage looks quite hot, Bryan! More Than This didn't get more than 6 in the charts, and was Roxy's final top ten hit.

(15) SHAKATAK – Nightbirds
This chirpy tune was flying on its way towards number 9.

(5) DOLLAR – Give Me Back My Heart
Looking like the couple on top of the wedding cake tonight, with another Trevor Horn production. It peaked at number 4 and was the duo's penultimate top ten hit, though they would have to wait another five long years for their final one.

(40) SIMPLE MINDS – Promised You A Miracle
It's always exciting to watch a major act make their debut on the show, and Simple Minds had been knocking on the door since 1979 to no avail, until finally they had a breakthrough with the aptly titled Promised You a Miracle, which peaked at 13.

(28) MONSOON – Ever So Lonely
Zoo go all eastern and get their routine on the show this week, helped perhaps by Monsoon singer Sheila Chandra being unwell. The song peaked at number 12 and was the band's only top 30 hit.

(16) BARDO – One Step Further
The duo were still warming up for the Eurovision Song Contest, now just over a week away. One Step Further peaked at number 2 in the charts ~ if only they had taken the advice of their own song.....

(1) BUCKS FIZZ – My Camera Never Lies
Meanwhile, last year's winners triumphantly return to the studio with their third (and final) number one hit, sporting a look that can perhaps be described as sci-fi kitchen.

Papa's Got a Brand New Top of the Pops

Simon Bates, with his best bunny girl by his side, introduces the Top of the Pops easter special! 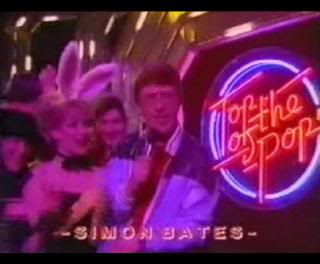 And now its time for Our Carrot...

(32) HAIRCUT 100 – Fantastic Day
Nick and the boys get easter off to a bouncy start with the third top ten hit (reached number 9) taken from their number 2 album, Pelican West.

(2) BUCKS FIZZ – My Camera Never Lies (video)
Next week's number one but edited out of tonight's 7.30 slot.

(4) CHAS & DAVE – Ain’t No Pleasing You
The rockneys bring their sophisticated new look into the studio but narrowly miss out being next week's number one to the act who preceded them.

(24) THE BOOMTOWN RATS – House On Fire ®
With their final top 30 hit, now at its chart peak. They were one of the hottest bands just two years prior, but new wave was now old news.

(23) ELTON JOHN – Blue Eyes (video)
Looks like Elton has somehow half inched Chas's white piano and is tinkling its ivories up some exotic mountain somewhere sunny, landing himself his first top ten hit of the 80's for his troubles, when Blue Eyes made number 8.

(27) SHALAMAR – I Can Make You Feel Good (danced to by Zoo)
They would never have edited out a Legs & Co routine from the 7.30 slot would they, not even one of the more saucy ones, but this Zoo routine suffers the indignation of being edited out tonight.

(19) PAUL McCARTNEY & STEVIE WONDER – Ebony And Ivory (video)
Our first sighting of Paul since John Lennon's death, and he's looking pretty perky, and no wonder, he's about to get to number one for the 19th time, taken from his quite excellent album Tug of War, which was also a number one.

(1) GOOMBAY DANCE BAND – Seven Tears
After three weeks at number one, we get a new studio performance, this time minus the fire eating!

(30) PIGBAG – Papa’s Got A Brand New Pigbag (and credits)
We had a bouncy start to the show, and here's an even bouncier ending, and we do also get to see a bit of Zoo after all! Pigbag's only top ten hit, peaking at number 3. 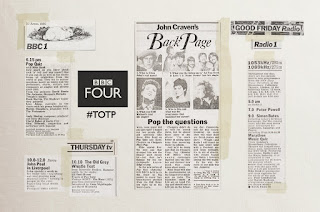 More Than Top of the Pops

No fooling about, it really is April 1st 1982 already! The eve of the Falklands War no less. 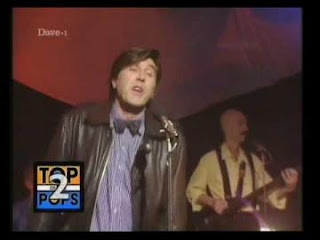 (33) MOTÖRHEAD – Iron Fist
Only Motorhead could get the show off to a start this loud ~ and was that a live vocal from Lemmy in amongst it? But sadly it was the band's final top 30 hit when it peaked at 29.

(2) IMAGINATION – Just An Illusion ®
Now at its chart peak.

(18) ROXY MUSIC – More Than This
'Live in the studio for the first time in over a year' with what would become their final top ten hit when it made it to number 6.

(NEW) BARDO – One Step Further
As was 1982's rather good Eurovision entry, though again it pops up on April 15th.

(NEW) CHAMPAGNE D’ORANGE – C’est Seulement Une Wynd Oop (video)
It's April 1st and this song translates as 'its only a wind up'...... but it was edited out of tonight's 7.30pm showing! Maybe at the insistence of Buck's Fizz!

(9) JAPAN – Ghosts ®
The first of two top ten hits for Japan, this one being their biggest hit reaching number 5.

(1) GOOMBAY DANCE BAND – Seven Tears ®
This was actually their second week at number one, but they will still be there for one more week.

(37) SHAKATAK – Nightbirds (and credits)
Taken from their top four album of the same name, this became the first of two Shakatak top ten hits, both of which made number 9.