Top of the Pops Brew

I'm away from home this week so I've prepared this blog before actually watching this edition on BBC4, so I don't know who if anyone got the 7.30 chop. One thing to note though is that this marks the point where Legs & Co enter into their final twelve months on the show.... 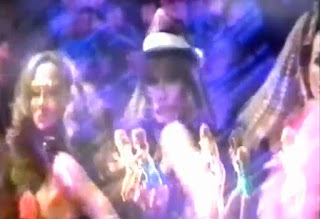 (20) DAVID BOWIE – Fashion (danced to by Legs & Co)
The follow-up to Ashes to Ashes, from his Scary Monsters album.

(25) OLIVIA NEWTON-JOHN & CLIFF RICHARD – Suddenly (video)
The fifth single from Xanadu, this one peaking at 15. Although the movie flopped, a stage version become a surprise hit on Broadway in 2007, and the show has recently opened in London at the Southwark Playhouse Theatre.

(22) SHOWADDYWADDY – Why Do Lovers Break Each Other’s Hearts ®
This was now the peak position for their final top 30 hit.

(1) BARBRA STREISAND – Woman In Love (video)
The second of three weeks for Barbra's only number one.

(26) STEPHANIE MILLS – Never Knew Love Like This Before (crowd dancing) (and credits)
This one reached number 4 to become Stephanie's only top ten hit.


The next show should be the 6th November, but it was hosted by Jimmy Savile and so won't be shown, so instead BBC4 will move on to November 13th 1980.
Posted by Angelo at 00:00 68 comments:

All Out of Top of the Pops

It's October the 23rd 1980, and we reach another edition that won't be broadcast on BBC4 due to the host being DLT... 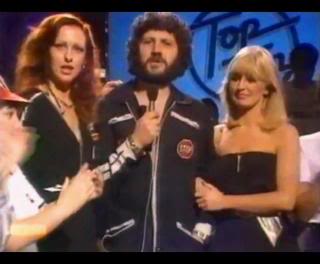 (9) THE NOLANS – Gotta Pull Myself Together (video)
Now at its chart peak.

(26) KATE BUSH – Army Dreamers (video)
The third single from her Never Forever album, made it to number 16.

(12) ORCHESTRAL MANOEUVRES IN THE DARK – Enola Gay ®
On its way to number 8 in the charts.

(1) BARBRA STREISAND – Woman In Love (danced to by Legs & Co)
A new number one, and Barbra's only number one in the UK.

Top of the Pops Eat Dog

We have seen some decade milestone debuts so far in 1980 ~ the Human League, OMD, but could it be that this edition from October 16th is where the 80's New Romantics movement truly went mainstream, with the debut of Adam and the Ants...... 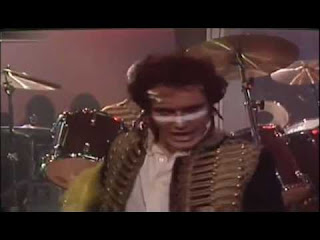 (3) MADNESS – Baggy Trousers ®
Now at its peak in the charts. Then along comes the first of tonight's special guests, Suzi Quatro, to plug her new song, Rock Hard, which just about made the top 70.

(36) SHOWADDYWADDY – Why Do Lovers Break Each Other’s Hearts
For a moment it looked like Dave Bartram had joined the 80's with a mullet haircut, but it turned out to be only a wig! Maybe that's why this was their final top 30 hit.

(9) BARBRA STREISAND – Woman In Love
Six Cinderellas in the shape of Legs & Co do their routine to what will be next week's number one.
Then along comes the second of tonight's special guests, Michael Palin, to plug the new banned Monty Python album, and to introduce.....

(37) ADAM & THE ANTS – Dog Eat Dog
Tommy Vance predicts this band will do quite well. Dog Eat Dog became the first of 7 top ten hits for the band over the next two years, and the sound of the early 80's has well and truly arrived.
Then along comes Dollar to plug their new song, Takin a Chance on You, which didn't quite make the top 60. Thereza was also keen to show Tommy her ring. She'd just got engaged to David.

(10) MATCHBOX – When You Ask About Love
This was the band's biggest hit by far, making it to number 4.

(1) THE POLICE – Don’t Stand So Close To Me (video)
Final week at number one.

Next up on BBC4 should have been October 23rd, but it is hosted by DLT, so instead we will move on to October 30th with Peter Powell and Colin Berry.
Posted by Angelo at 14:34 58 comments:

What's in a Top of the Pops

With the studio audience already dancing to D.I.S.C.O. by Ottawan, Peter Powell gets the 9th October edition underway..... 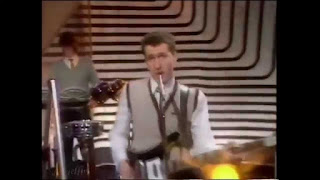 Arfur Daley, you should be proud of your little Terry today....

(27) STATUS QUO – What You’re Proposing
Is this the first time we've seen the Quo in the studio since these reruns began? What You're Proposing became the first of ten top ten hits for the group in the 80's. And I propose what a great way to start a show!

(5) DIANA ROSS – My Old Piano (video)
Now at its peak in the charts. And edited out of the 7.30 show. Instead we get guest Dennis Waterman going all coy about plugging his new 'sing the theme tune' single. But we don't mind.

(35) ORCHESTRAL MANOEUVRES IN THE DARK – Enola Gay
This iconic follow-up to Messages became the first of five top ten hits in the 80's for OMD.

(9) BLACK SLATE – Amigo
A new studio performance here, and a smaller hat, but Amigo was at its peak and this was their only time in the top 30.

(19) COFFEE – Casanova
Legs & Co do a sort of period drama can-can with lots of adlibbed 'Ooohs' to Casanova which then peaked at 13.

(25) THE NOLANS – Gotta Pull Myself Together (video)
This became the second of three top ten hits for the sisters. Dennis Waterman seemed to approve. And then up pops guest number two Paul Jones to plug his new Blues Band album.

(36) GILBERT O’SULLIVAN – What’s In A Kiss?
Gilbert's first chart hit for five years, but it was also to be his final time in the top 30. And what's in a Top of the Pops? Well not Gilbert, he was edited out of the 7.30 showing!

(10) THIN LIZZY – Killer On The Loose (video)
Their final top ten hit now at its peak.

(7) ODYSSEY – If You’re Looking For A Way Out (video)
Got one place higher.

(6) THE SPECIALS – International Jet Set (still picture)
This one seems to have passed the show by ~ and now at its chart peak.

(3) MADNESS – Baggy Trousers (video)
Three was as high as this one got, though it was the thirteenth biggest seller of 1980.

(2) OTTAWAN – D.I.S.C.O. (video)
Despite being the fifth biggest selling single of the year, this could get no further than number 2.

(1) THE POLICE – Don’t Stand So Close To Me (video)
Third week at the top for the number one biggest selling single of 1980.


Next up is the 16th of October hosted by Tommy Vance, in two weeks time, due to the Sky at Night.
Posted by Angelo at 12:52 54 comments:

Very big thanks to Manorak for making the 2nd October 1980 edition of Top of the Pops available at Vimeo. This show won't be broadcast on BBC4 next week because it is hosted by DLT. 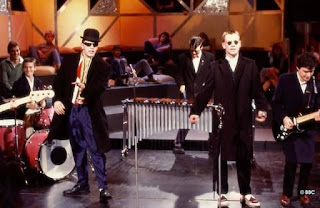 (2) STEVIE WONDER – Masterblaster (Jammin’) (video)
At its peak in the charts now.

(38) MATCHBOX – When You Ask About Love
The third of four top 30 hits for Matchbox in 1980, and this one would become their only top ten hit.

(11) CHANGE – Searching (danced to by Legs & Co)
This cheeky Legs routine couldn't help Change get any higher than 11.

(20) ODYSSEY – If You’re Looking For A Way Out (video)
On its way to becoming a top ten follow up to Use it Up and Wear it Out.

(1) THE POLICE – Don’t Stand So Close To Me (video)
The second of four weeks at number one.

Top of the Pops so Close to Me

It's a welcome return to BBC4 then of Top of the Pops 1980, in what will prove to be a momentous final quarter of the year, and for the first time since the Spring we are (almost) back in sync with 2015! 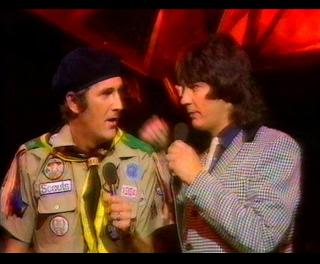 Whatever happens Mike, don't do your Cliff Richard impression.....

(35) BLACK SLATE – Amigo
Mexican flavoured Amigo would make it into the top ten but it was the band's only top 40 hit.

(13) DIANA ROSS – My Old Piano (video)
The follow-up to Upside Down, and the 11th top ten hit for Diana since leaving the Supremes. Nice of her to make a proper video for this one ~ but seeing she was in the TOTPs studio as a guest just a couple of weeks earlier, maybe she could've recorded a performance then?

(8) OTTAWAN – D.I.S.C.O. (video)
The first of two top ten hits for the energetic duo from Guadeloupe.

(43) LINX – You’re Lying
The first of 3 top 30 hits for David Grant and the boys from their upcoming debut album, Intuition. This somewhat echoey version must have been a re-recording for the show.

(7) QUEEN – Another One Bites The Dust (video)
At its chart peak.

(2) RANDY CRAWFORD – One Day I’ll Fly Away (still picture)
Didn't quite make it to number one.

(1) THE POLICE – Don’t Stand So Close To Me (video)
Straight in at one, and Mike Read making a big deal of that (only the 7th act ever to do it!) the first single from their third album, Zenyatta Mondatta. Least said about the lyrics the better given today's climate!

(24) CHANGE – Searching
This follow up to A Lovers Holiday became the band's biggest hit when it made it to 11, and Mike, Leo and the crowd are joined in catastrophic fashion by 'Cooperman' for a spot of over the credits dancing.

Next week should have been the 2nd October 1980 with host DLT, but it will be skipped in favour of October the 9th with (a guest presenterless) Peter Powell.
Posted by Angelo at 12:36 59 comments: