Top of the Pops Red Balloons

Not only were there 99 red balloons on Top of the Pops on February 16th 1984 but 9 million viewers tuned in making it the 9th most popular show on BBC1 that week! 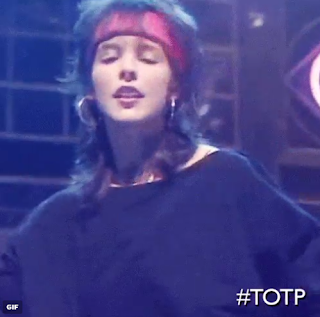 Slade – “Run Runaway” (34)
Who can get a show underway with more air violin enthusiasm than Slade? And Run Runaway would soon become their 16th and final top ten hit.

The Style Council – “My Ever Changing Moods” (8)
The first single from their number 2 album Cafe Bleu, it peaked at number 5.

Shannon – “Let The Music Play” (19) (video)
Went up five more places, but was also edited out of tonight's 7.30 showing, a bit odd given that they had to fill in with a Sounds of the 70's clip at the end!

Matt Bianco – “Get Out Of Your Lazy Bed” (36)
Making their debut now are Matt Bianco, and they swung all the way to number 15.

Nena – “99 Red Balloons” (11)
With an English lyrics version of a German song that had featured in a European hits segment on the show seven months earlier, armpit mania was about to sweep the nation, and of course this would be the next number one song we would get to actually see performed on the show. Yes, Frankie were still there, now four of five weeks of being banned.

Break Machine – “Street Dance” (27) (+ credits)
We play out with a dance routine this week, and Street Dance was the first of two top ten hits for Break Machine, peaking at number 3.

One Small Top of the Pops

This edition of Top of the Pops from February 9th 1984 won't be shown on BBC4 tonight because one of the hosts is DLT, so one big thanks goes to D42 for making it available here at Vimeo 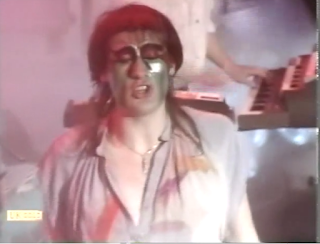 Something fishy is going on.....

Madonna – “Holiday” (7) (audience dancing/credits)
Went up one more place. Frankie now third of five weeks as the banned number one.

Top of the Pops Ga Ga

I don't know about ga ga but you simply had to be crazy not to be one of the 10.6 million viewers tuning into this live edition of Top of the Pops on February 2nd 1984! 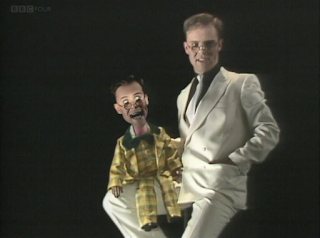 Will the real Thomas Dolby please stand up ...

Musical Youth – “Sixteen” (27)
Getting the show underway with their final hit are Musical Youth, with a little help from Sandra Lobban, and it peaked at number 23.

Queen – “Radio Ga Ga” (4) (video)
John Deacon battles it out with Brian May for the biggest hair in Queen and comes out on top, the single didn't quite make it to the top though, peaking at number 2.

Matthew Wilder – “Break My Stride” (5)
His only hit, went up one more place, but unfortunately edited out of the 7.30 showing.

Thompson Twins – “Doctor Doctor” (18)
The follow up to Hold Me Now bettered it by one place in the chart when it peaked at number 3.

Duran Duran – “New Moon On Monday” (12) (video)
The second single from their number one album Seven and the Ragged Tiger, (hindsight is a wonderful thing but did they really think this was better than The Reflex?) and in the video the band are seemingly attempting to start a revolution somewhere in eastern europe! Number 9 was its peak.

Manhattan Transfer – “Spice Of Life” (26) (audience dancing/credits)
No number one song this week of course because banned Frankie Goes to Hollywood were there for the second of five weeks with Relax. So we have to make do with 'chart veterans' Manhattan Transfer's first hit since 1980, and also their final hit, peaking at number 19. 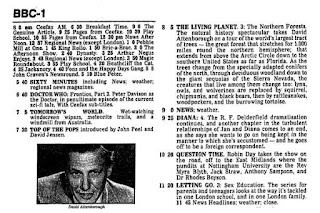 That's Top of the Pops Alright

The edition of Top of the Pops from 26th January 1984 features Mike Smith and therefore BBC4 will not be showing it, so a huge thanks to Neil B for making it available here at We Transfer. 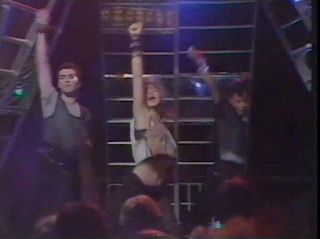 And the winner of the glamorous armpit competition is .....

The Alarm – “Where Were You Hiding When The Storm Broke?” (22)
At its chart peak.

Madonna – “Holiday” (29)
The Top of the Pops debut of the most successful female chart act of all time in the UK, Holiday peaked at number 6 but it then re-entered the chart in 1985, following Live Aid, and peaked at number 2.

The Smiths – “What Difference Does It Make?” (26)
Taken from their number 2 album, The Smiths, this single peaked at number 12.

Cyndi Lauper – “Girls Just Want To Have Fun” (10) + brief interview
Another major debut on tonight's show, and a single that peaked at number 2.

So after a little rest and recuperation our favourite show of the week returns to our screens with the (slightly wobbly tape) edition from January 19th 1984. 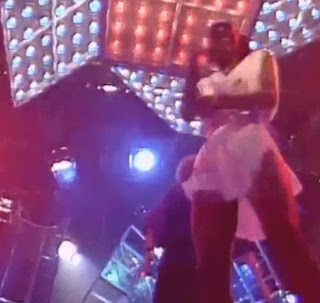 When you hire a cameraman who is only three foot tall ....

Whitesnake – “Give Me More Time” (29)
Getting the show off to an energetic start are Whitesnake, but this song got no higher in the charts.

Big Country – “Wonderland” (13) (video)
With a snowy video for the winter jumper season, Wonderland became the band's third of four top ten hits when it peaked at number 8.

Fiction Factory – “(Feels Like) Heaven” (28)
Making their debut with what would be their only top ten hit, indeed their only top 60 hit! But if you're only going to have one, make it a good 'un, and this was certainly a good 'un, peaking at number 6.

China Crisis – “Wishful Thinking” (16)
Performing what would be their biggest and only top ten hit when it peaked at number 9.

Gloria Gaynor – “I Am What I Am” (24)
A studio performance from Gloria and what a great vocal. Such a familiar song now but at the time it was brand new, from the 1983 broadway musical La Cage Aux Folles. A 90's remix of I Will Survive aside, this was Gloria's final top 30 hit and it peaked at number 13.

John Lennon – “Nobody Told Me” (11) (video)
Three years had already passed since John's death, but there were still a few tracks he recorded in 1980 to be released, and this one reached number 6 in the chart, and not a bad video either all things considered, taken from the top three album Milk and Honey.

Paul McCartney – “Pipes Of Peace” (1) (video)
The two main Beatles on the same show, this time Paul with his second and final week at number one. Could John be the one to replace him next week?

The Police – “King Of Pain” (17) (audience dancing/credits)
Essentially, this single marked the end of the Police, aside from a few re-mixes and live recordings, and number 17 was its peak. 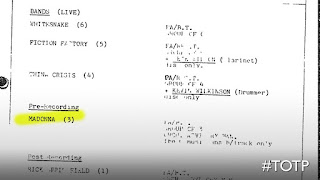 
Next up should be January 26th 1984 featuring that debut of Madonna (and Cyndi Lauper) but sadly Mike Smith was one of the hosts, so BBC4 will skip along to February 2nd instead.
Posted by Angelo at 13:19 75 comments:

A Rockin' Good Top of the Pops

Yeahhhhh Rat fans! We're all superstars tonight! So get your rubber johnny ears ready for all the hits from January 12th 1984! Brilliant! 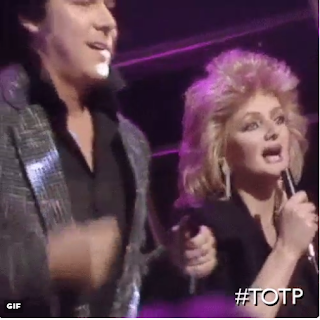 The Icicle Works – “Love Is A Wonderful Colour” (28)
Getting us underway this week with their debut hit, which was also to be their only top 40 hit when it peaked at number 15.

Roland Rat Superstar – “Rat Rapping (Brilliant Isn’t It)” (14) (video)
Featuring Kevin the Gerbil and Errol the Hamster. It was probably funny at the time ...... and now at its chart peak.

Snowy White – “Bird Of Paradise” (19)
From his top 30 album White Flames, this was Snowy's only top ten hit peaking at number 6. But edited out of tonight's 7.30 showing.

Lionel Richie – “Running With The Night” (22) (video)
This follow up to All Night Long made it to number 9. All the videos were turning into mini movies now weren't they?

Joe Fagin – “That’s Living Alright” (18)
With the theme song of course from the fantastically popular Auf Wiedersehen Pet, it was Joes's only top 40 hit and it reached number three.

Paul McCartney – “Pipes Of Peace” (1) (video)
The first of two weeks at the top for what was not quite the last number one by a Beatle....

Billy Joel – “Tell Her About It” (4) (audience dancing/credits)
Now at its peak. 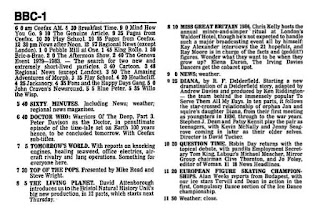 Top of the Pops Countdown 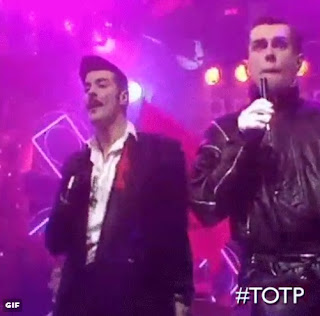 No, you must've misheard me, this song is about having a big election.......


And it's the big numbers only from now on ~ the Top 30 countdown has been expanded to the Top 40!
05/01/84 (20th anniversary edition) (David Jensen & John Peel with brief appearance from Alan Freeman)

Frankie Goes To Hollywood – “Relax” (35)
It's a live show and what a way to start a year! Relax would soon be banned of course, but it didn't matter, this record had number one written through it like a stick of rock, and Frankie Goes to Hollywood were poised to take 1984 by storm.

Rod Stewart – “Sweet Surrender” (32) (video)
Peaked at number 23, but edited out of tonight's 7.30 showing.
John Peel then introduces some clips from the 1960's, which somehow also included Thin Lizzie and Sweet from 1973, possibly because they were in black and white:

Status Quo – “Marguerita Time” (5)
Went up two more places - but was edited out of the 7.30 broadcast tonight.

Frank Kelly – “Christmas Countdown” (26)
Feck! It's filthy Father Jack Hackett from Father Ted, with a considerably cleaned up version of his X rated interpretation of the 12 Days of Christmas. Number 26 was its peak though ~ Arse! 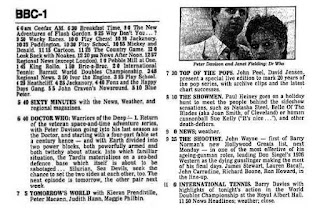