Sporting a new short haircut, a now slightly more sophisticated Peter Powell hosts the 25th October 1979 edition of Top of the Pops, the last one before Halloween, but Halloween wasn't such a big deal back in 1979, but Grease still was...... 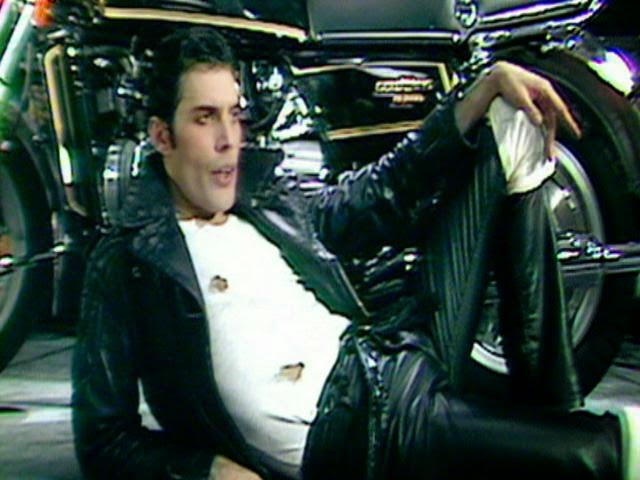 
The Selector ~ are selected to be the chart run down song this week.

The Specials ~ completing a two-tone takeover of the beginning of the show, this would soon become a second top ten single of 1979 for the Specials.

Viola Wills ~ was well on her way to number 8 in the charts.

Queen ~ turning up a bit too late for a part in Grease this song nevertheless got to number 2 in the UK and was the band's first number 1 in America.

Cats UK ~ not so cool for them - they were cut out of the 7.30pm broadcast tonight.

Charlie Daniels Band ~ maybe this one got a Halloween mention from Peter? ~ but it was also edited out from the 7.30pm showing on BBC4.

Legs & Co ~ go disco again this week with a routine to My Forbidden Lover by Chic.

Dr Hook ~ another showing for a video that we'll get to see quite a few more times yet.

Iris Williams ~ there had already been two instrumental hit versions of this tune in 1979, now here was Iris adding some lyrics and a lot of vibrato and joining forces with the Top of the Pops orchestra.

The Dooleys ~ another showing for this performance of a song that is seeming to split opinion a little, personally I quite like it.

Janet Brown ~ ok I take it back about Halloween not being so big in 1979 ~ because this was a real horror show which even made Dame Edna's woeful Disco Matilda look good in comparison.

Errol Dunkley ~ a new performance of OK Fred which was now at its chart peak.

Lena Martell ~ not many British acts have ever managed to get to number one with a country song, in fact I can't think of any off hand, but love it or loath it Lena did it and here she is doing it live with the Top of the Pops orchestra, who, as they had for several other performances this year, were once again in full view.

Next week then is the edition from November 1st 1979 hosted by Mike Calypso Read.

She's In Love with Top of the Pops

Once more our poptastic thanks must go to Neil B for coming to the rescue with another unmissable edition of Top of the Pops 1979, featuring debuts by New Muzik and the Selector, a final top 20 hit for glam rocker Suzi Quatro, Legs & Co as unicorns, Buggles with their only week at number one, a most eccentric song over the credits and lots of sparrows, that will be skipped by BBC4, this time for being hosted by DLT.  So as before do not click on the link if you are going to be offended..... 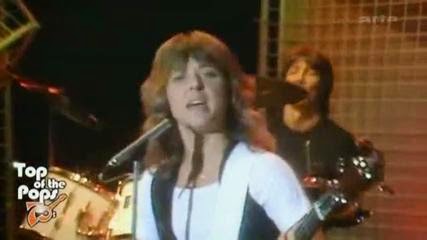 Eat your hearts out Mud and Sweet!

My Forbidden Top of the Pops

Well, it's not exactly a forbidden show this week, being hosted for the first time by Andy Peebles (who wouldn't be seen again on the show for over two years!) 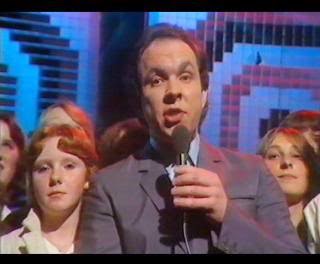 
Al Hudson & the Partners ~ prove they can do it over the charts, but they couldn't do it again, this was their only top 20 hit.

The Dooleys ~ with a colourful performance of their terrific follow up to Wanted, the band were at the peak of their success now, but The Chosen Few would prove to be their final top tenner.

Legs & Co ~ just had to dance to Don't stop 'Til you Get Enough, and were quite striking in black dresses set against a whiteout background.

Chic ~ another trip to the Top of the Pops studio, this time to perform a single from their second album of the year, Risqué, but their impressive run of top ten disco hits was over.

Dr. Hook ~ with a single that had 'been around for six months' according to Mr Peebles, although I have its release date as 22nd September 1979 ~ maybe it got radio play a long time before it came out? ~ but anyway it would soon be the number one.

Viola Wills ~ braves the Top of the Pops Orchestra this week for a rendition of her only top ten hit.

Charlie Daniels Band ~ the devil came and cut this one from the 7.30 show.

Errol Dunkley ~ gives a yagga yagga performace of Ok Fred, on its way into the top 20.

Cats UK ~ here we get a female Chris Difford, complete with sassy girl backing singers, telling a tale of a holiday to Malaga, with a rather large nod to Squeeze and Lorraine Chase.

Dave Edmunds ~ the Rockpile lads had all but moved into the Top of the Pops studio at this point, such was the frequency of their appearances.

Dana ~ a change of pace now, as Dana impressively slows things down with the TOTPs orchestra, but sadly a bit too slow to make it into the charts.

The Police ~ a third and final week at number one ~ but we won't get to see the Buggles replace them next week, not on BBC4 anyway.

Fleetwood Mac ~ drum us out this week with Tusk.

So next week then, the 18th October will be skipped, it's obviously still deemed too soon to show DLT again, so we will leap to the 25th October hosted by Peter Powell, with what is pretty much a repeat of tonight's edition.

Making Plans for Top of the Pops

October 1979 arrives but there's nothing autumnal about this edition of Top of the Pops which offers some of the most perfectly ripe tunes to pick from the charts.... 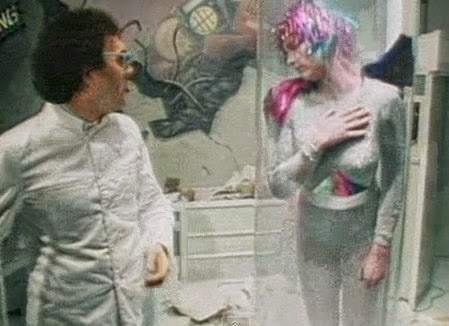 I bet The Tubes wish they'd thought of this...


Madness ~ now at their princely peak of number 16.

XTC ~ perform their breakthrough hit Making Plans for Nigel, with Colin Moulding again doing the lead vocal, as he had done for Life Begins at the Hop earlier in the year.

Blondie ~ a first showing for Dreaming which had already bounced up the charts to its peak position of number 2.

Matumbi ~ the lead singer had a snake around his neck, but it wasn't enough to make Point of View slither into the top 30.

Buggles ~ this will be the only time on BBC4 we get to see this amazing song that would prove almost impossible to follow up for Buggles, and the video was arguably the most sophisticated yet seen, the 1980's are not so very far away now....

Sad Café ~ a second performance for Every Day Hurts - I'm sure it didn't hurt too much when it climbed into the top 3.

Squeeze ~ this was actually the 4th and final single from their Cool for Cats album, and it reached its Chris Difford dad dancing peak here at 24 in the charts.

Kate Bush ~ gets the Legs & Co treatment this week - it looked like they were going to copy her dance from the video at one point, but they thought better of it.

Rainbow ~ were edited from the 7.30 show, but we've seen the video previously.

The Jags ~ are not edited out this week so we get to see them perform this Rolls Royce of a tune which was to be their only top 20 hit.

Lena Martell ~ was edited out of the 7.30 show ~ shame ~ but we will get to see this unlikely chart topper on shows in the very near future.

The Police ~ a second week at number one for Message in a Bottle, with our host David informing us that their excellent new album Regatta de Blanc is out on Monday.

Nick Lowe ~ just before the credits this week, David turns the figure standing next to him around and reveals a new presenter for next week ~ Andy Peebles!

Here's the edition of Top of the Pops from 27th September 1979 that will be skipped by BBC4 on Thursday due to it being hosted by Jimmy Savile. In keeping with most of the shows from this period in time it's an excellent one featuring classic hit after classic hit, including a live performance by Frantique with the TOTPs orchestra, studio performances from the likes of Dave Edmunds and the Dooleys, classic videos from Michael Jackson, Status Quo and the Police, but most of all ~ it has the debut of the Nolans! 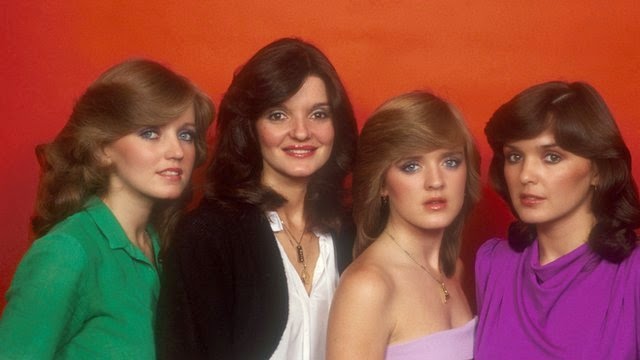 We were the first New Romantics, yes, us and the Skids...

If I Said You Had a Beautiful Top of the Pops

Yee Haw ~1979 surely is catching up with 2014 real fast now cowboys and cowgirls, just take a look at this here edition from the 20th September, doggone it..... 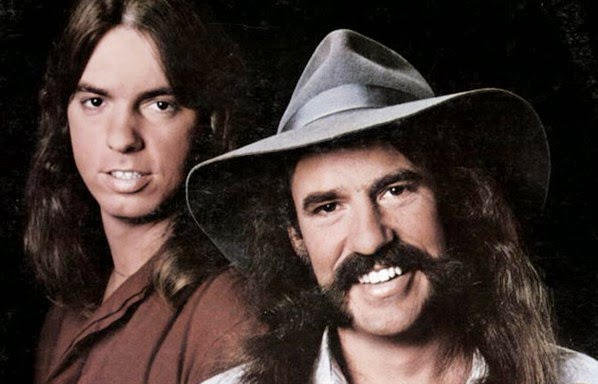 
Racey ~ do the chart rundown honours this week with Boy Oh Boy now in its peak position.

The Starjets ~ pay homage here to the Ramones both in sound and t-shirts ~ but War Stories came to an end at 51 in the charts.

Kate Bush ~ how timely is this? This performance was from a live e.p. which featured songs from her first two albums ~ but this sounded and looked so amazingly polished was it really live?

Madness ~ due to the 13th September being skipped we get to see the Nutty Boys for a second week running, and I do believe we'll hear them next week too.

The Bellamy Brothers ~ no mistakin this is a live rendition, pardners, and they seem to have not had a hair cut since the last time we saw them back in good old 1976, when they were letting their love flow.

The Jags ~ were the only act to be chopped from the 7.30pm showing this week.

The Tourists ~ I don't remember this song at all, but if you take away the guitars and replace them with synths then I reckon you've got yourself a pretty good Eurhythmics record.

The Police ~ now I do definitely remember this one, and the accompanying video. Message in a Bottle was the first single from their second album, Reggatta de Blanc, and was about to deservedly become the band's first number one hit.

Sad Café ~ this fantastic tune was a long awaited breakthrough for the band but it would ultimately be their only top ten hit.

Rainbow ~ another band enjoying a breakthrough hit, Since You've Been Gone was the first of three consecutive heavy rock top tens spread over two years.

ELO ~ Legs & Co are supplied with scaffold towers on which to perform their dance routine to Don't Bring me Down.

Gary Numan ~ proves its not easy to look mean and moody whilst jingling a tambourine, and Cars would only be parked at the top of the charts for one week.

Bill Lovelady ~ plays us out with Reggae For it Now at its peak.


Next week, the 27th September 1979, is a Jimmy S edition, and so will obviously be skipped. Fingers crossed it becomes available online. So BBC4 will be moving on to October 4th hosted by David Jensen.