Stay With Me Till Top of the Pops

It's the 12th July 1979 already, hosted by hello hello hello Mike Read, and a whole lotta lovely new performances on the show this week.... 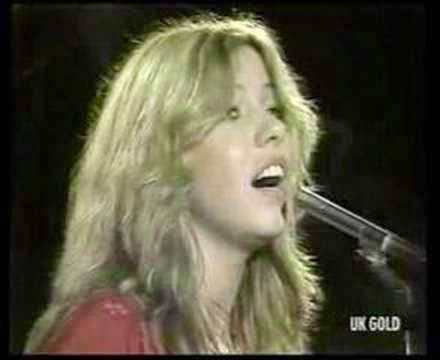 Slick ~ with Space Bass at its number 16 peak do the chart rundown this week
Siouxsie & the Banshees ~ looking very glamorous in her mackintosh raincoat, Playground Twist just about wriggled into the top 30.
Thom Pace ~ still a bit dull is this one, getting close to its number 14 peak now.
The Beach Boys ~ the Legs and Co ladies are back from holiday, although they seem to have landed in some remote sun tanned orange studio for this Beach Boys routine.
The Police ~ in the studio for a second time this year with their fabulous follow up single to Roxanne, the second release from their debut album, Outlandos D'Amour.
Rickie Lee Jones ~ this was her only hit single in the UK, reaching number 18.
Stonebridge McGuinness ~ were edited out from the 7.30 show, catch up with Oo-Eeh Baby later on BBC4 tonight at 1.30 am.
Janet Kay ~ was also edited from the 7.30 show, now in her peak number two position.
Public Image LTD ~ a debut in the studio for Johnny and the boys - Jah Wobble taking every opportunity here to show off his specially blacked out tooth
Supertramp ~ with the title track from their 18 million seller album, and a video that looked like it was filmed at the same time as their last one. Did they ever make it into the Top of the Pops studio? I think they did for Dreamer in 1975.
Chantal Curtis ~ 'zooming up the charts' at 51 but this French lady didn't get any higher and didn't get another hit.
Thin Lizzie ~ another 7.30 edit victim, but we have seen this video previously.
Judie Tzuke ~ now we're talking! An amazing performance of an amazing song, this was actually the second single from her debut album, Welcome to the Cruise (the first, which failed to chart, was a wonderful acappella tune called For You) - somehow, Stay With Me Till Dawn was her only hit single.
Tubeway Army ~ now in their 3rd of 4 weeks at number one.
Donna Summer ~ not such a bad girl, she sings us out over the credits this week.
Next up is the 19th July 1979, presented by David Jensen.
Posted by Angelo at 15:04 28 comments:

Thought I'd post this one up quick whilst it's still available! Thanks once again to Darnall 42 for coming to the rescue and allowing us this opportunity, so c,mon everybody, throw off your crash helmets and rev up your engines! 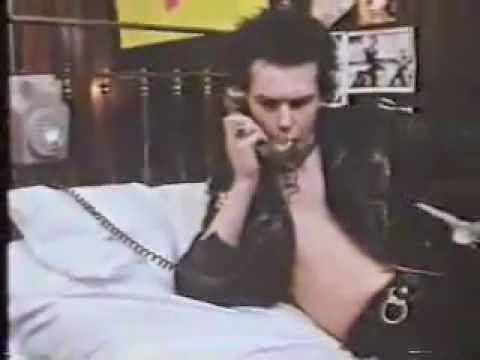 what, time for my last top ten hit?


As always, don't click the link if you are going to be offended by the host, Jimmy Savile.

So on a night when England sadly, if rather predictably crash out of yet one more World Cup, at least over on BBC4 we have another edition of ....... 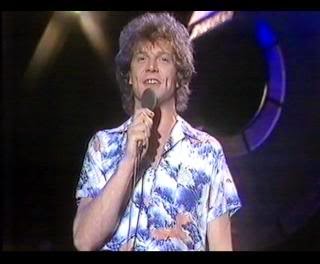 Squeeze ~ a new performance of Up the Junction, with Glenn in a stripy t-shirt, just one chart place below its peak position.

Lene Lovich ~ such a lively crowd in this video - reminding me somewhat of the Nirvana video for Smells Like Teen Spirit.

Thom Pace ~ a little dull this one following straight after Lene Lovich. Maybe was Thom's only hit and made it to number 14.

Quantum Jump ~ another showing for The Lone Ranger now at its peak at number 5.

Janet Kay ~ a new performance of Silly Games from Janet, adorned in a silver headdress, though not sure if she did a live vocal this time.

Thin Lizzy ~ a fun video for Do Anything You Want To, but this tune did remind me of The Boys are Back in Town, particularly the guitar riff, but nevertheless a good song.

UK Subs ~ making their debut on the show with Stranglehold, the first of two top 30 hits for this punk group in 1979.
Gerry Rafferty ~ a video reminiscent of the one he made for Baker Street a year earlier, Night Owl was his first of two singles from the album of the same name.

Chas and Dave ~ looks like a third performance of Gertcha, now at its number 20 peak, but this was also edited out of the 7.30 showing.

Tubeway Army ~ Gary and the boys are back in the studio for a new performance of Are Friends Electric now it has made it to number one. This was the second single from their album Replicas, the first one, Down in the Park, failed to chart.

Slick ~ play us out over the credits of this Legless & Co edition of Top of the Pops.

The next edition is from the 5th July 1979 and its a Jimmy Savile, so we won't get to see it unless it somehow turns up online somewhere, because it was shown on UK Gold.

Otherwise we jump all the way to the 12th July 1979 with Mike Read.

Huge thanks once again to Darnall 42 for uploading an edition of Top of the Pops 1979 that will not be broadcast on BBC4, this time due to the host being Dave Lee Travis. 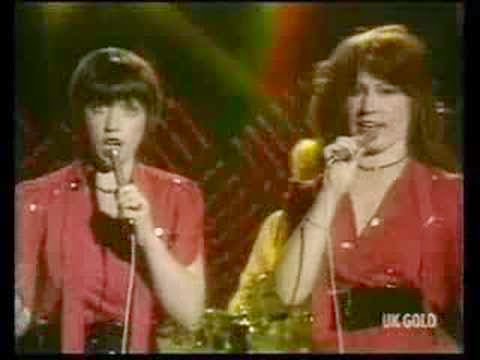 (22) THE CLASH – I Fought The Law (and charts)
(21) EDDY GRANT – Living On The Frontline
(55) THE DOOLEYS – Wanted
(25) VILLAGE PEOPLE – Go West (video)
(63) RUBY WINTERS – Baby Lay Down
(37) THE RUTS – Babylon’s Burning
(24) AMII STEWART – Light My Fire (video)
(NEW) DAME EDNA EVERAGE – Disco Matilda
(16) DOLLAR – Who Were You With In The Moonlight ®
(57) PATRICK HERNANDEZ – Born To Be Alive
(14) JOHN WILLIAMS – Cavatina (danced to by Legs & Co)
(71) SNIFF ‘N’ THE TEARS – Driver’s Seat
(1) ANITA WARD – Ring My Bell ®
(29) THOM PACE – Maybe (and credits)
The Clash ~ it's the band who refused to be on Top of the Pops playing over the credits this week
Eddy Grant ~ this song was featured three times on the show, twice hosted by Jimmy Savile, and the other by DLT. So BBC4 audiences won't get to see Living on the Frontline at all.
The Dooleys ~ here's the moment they did a Brotherhood of Man, and switched to Abba style female lead singers, and to great effect. Wanted became their biggest hit when it reached number 3.
Village People ~ very enthusiastic dancing from the boys in what looked like footage from an (American?) tv show.
Ruby Winters ~ appearing live in the studio but Baby Lay Down went to sleep at number 43.
The Ruts ~ making their fiery debut on the show with what became their only top ten hit.
Amii Stewart ~ more flames on show with another disco version of an old song, this time the Door's Light My Fire, and another top ten hit being kindled for Amii.
Dame Edna Everage ~ some things are just so bad they are funny, and some things are just so bad...... but Barry to his credit gives it some welly, though thankfully this non-charter won't be on again!
Dollar ~ a good year for the duo with top ten hits soon to follow.
Patrick Hernandez ~ picking up where Harpo and Paul Nicholas left off, this was his only UK hit, and I bet the aforementioned two would have loved to have twirled their canes to this one.
John Williams ~ it's a bendy ballet routine this week from Legs and Co.
Sniff n the Tears ~ I was half expecting this to be a novelty record in answer to Driver 67, but no such luck, Drivers Seat was their only charter and it stalled outside the top 40.
Anita Ward ~ still having a good chime at number one :-)
Thom Pace ~ plays us out with his only hit which we'll see on the show next week.
Back on BBC4 next time then with the edition from 28th June 1979.
Posted by Angelo at 14:09 29 comments:

Well the Maggie Stredder Singers (aka the Ladybirds) and the Top of the Pops Orchestra were back with a vengeance on this week's show, unleashed by Mike Read... 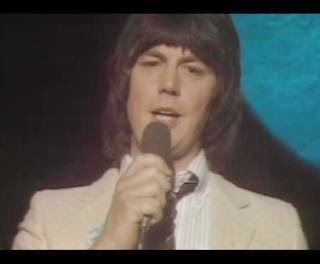 'Are they back from the pub yet?'

Match ~ another group of Bee Gees wannabees, but Boogie Man was their only charting single, and it peaked at 48.

McFadden and Whitehead ~ now this was more like it. Not only a great song, but being performed live in the Top of the Pops studio with the Maggie Stredder Singers (who I thought had left the show by now) and the Top of the Pops Orchestra both in full view. And I thought it sounded pretty good!

Earth, Wind and Fire ~ another outing for this video, though not on the 7.30 edition on BBC4 tonight.

Lene Lovich ~ and a very quirky Legs and Co routine to go with this very quirky and highly enjoyable song.

Gerry Rafferty ~ sadly edited out of the 7.30 edition, but should be on again in two weeks time. Such a cool song this one.

Quantum Jump ~ busy leaping up the charts, but edited out tonight. Its the same performance as the 31st May though. Kenny Everett was largely responsible for this becoming a belated hit ~ using it on his tv show and playing it on his radio show.

Edwin Starr ~ 1979 was a good year for Edwin, with two top ten hits, Happy Radio will move up one more place. But this was also his final top tenner.

Tubeway Army ~ a repeat showing for Are Friends Electric, which had made a big jump up the charts on its way of course to the very top. And I remember buying this very edition of Smash Hits ~ 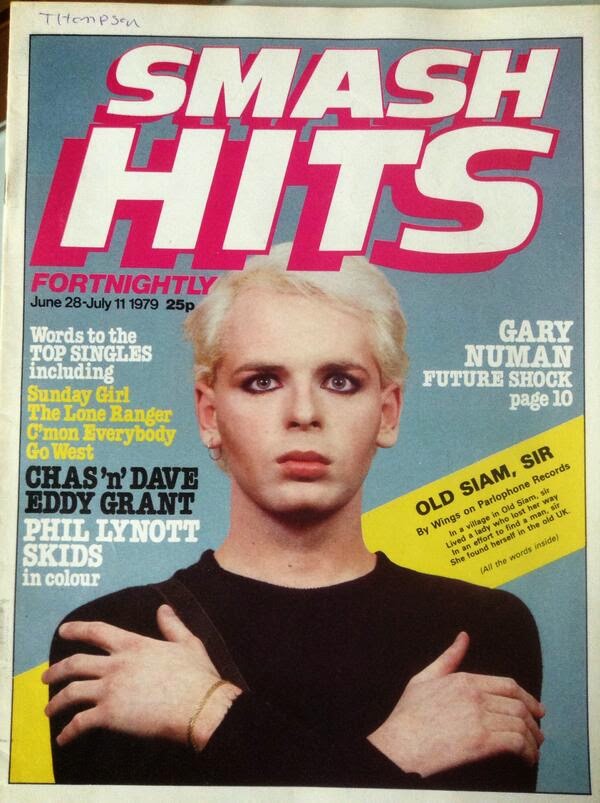 Janet Kay ~ here's a song that totally passed me by at the time, despite it being somewhat eccentric and memorable. Silly Games was to be Janet's only hit (albeit 3 times) and made it all the way to number 2.

Chas and Dave ~ the gertcha boys are back and managed to slip in another 'cowson' again!

Squeeze ~ not shown last week at 7.30 but here is that same performance now in all its BBC4 glory. Up the Junction was the third of four singles to be released from their Cool for Cats album.

Anita Ward ~ replacing Blondie at the top of the charts, this was Anita's one and only UK hit, and here we are treated to another live studio performance to round off an excellent show.

John Williams ~ provides an unusually chilled feel to the end credits with his only top twenty hit.

Next week's show, the 21st June, is hosted by DLT. So the next edition on BBC4 will have to be the 28th June with Peter Powell.