Top of the Pops Before You Go Go


Wakey wakey, rise and shine, it's Top of the Pops 1984 time, and 8.15 million alarm clocks are chiming for June 6th and the last ever show to be presented by the Rhythm Pals. 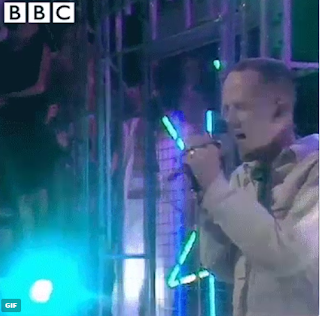 Have I Got Tonsils For You

Spandau Ballet – “Only When You Leave” (5)
Getting the show underway with the first single from their number 2 album, Parade, and it peaked at number 3.

Howard Jones – “Pearl In The Shell” (8)
With Jed mark 2 on the saxophone, Pearl in the Shell went up one more place.

Evelyn Thomas – “High Energy” (9)
Performing the sound of the clubs and peaking at number 5.

Bananarama – “Rough Justice” (29)
Perhaps not one of their best known hits, though it had quite a catchy chorus, but it peaked at number 23.

Bronski Beat – “Smalltown Boy” (13)
Making their studio debut with an impressive live vocal from Jimmy Somerville, Smalltown Boy was their first of four top ten hits and peaked at number 3.

Wham! – “Wake Me Up Before You Go-Go” (1)
Clearly enjoying their first number one, but this was its second and final week.

Sister Sledge – “Thinking Of You” (19) (audience dancing/credits)
This was their first top 30 hit since they were Lost in Music in 1979 and it peaked at number 11. 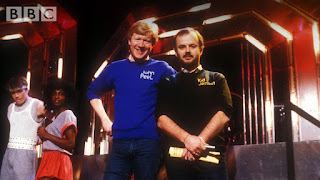 Top of the Pops with Tears in my Eyes

This edition of Top of the Pops from May 31st 1984 will not be shown on BBC4 due to one of the hosts being DLT (even though his sentence has now long expired!) so a huge thanks goes to D42 for making it available here at Vimeo. 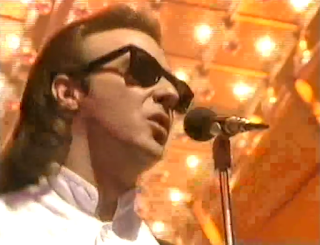 Dancing with a mullet in my ears

Deniece Williams – “Let’s Hear It For The Boy” (2) (audience dancing/credits)
At is peak.

This edition of Top of the Pops from May 24th 1984 will not be shown on BBC4 due to one of the hosts being Mike Smith. So a very big thanks goes to Sean Cuthbert for making it available for download here at Mega.nz 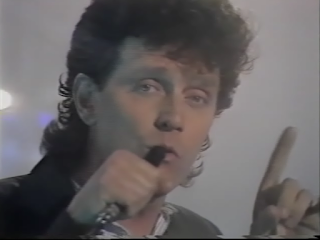 Wham! – “Wake Me Up Before You Go-Go” (4)
On it's way to number one of course ~ surprising it didn't enter the charts at the very top.

Howard Jones – “Pearl In The Shell” (25) (video)
A third top ten hit from his number one debut album, Human's Lib, it peaked at number 7.

Let's Hear It For Top of the Pops

A big round of applause from 8.75 million viewers for our favourite show on its return from a mini summer break! 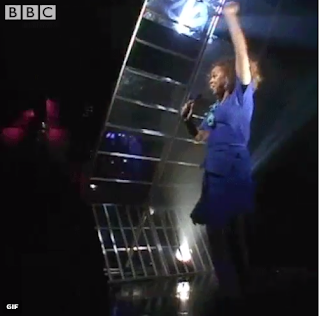 Break Machine – “Break Dance Party” (16)
With their mixture of acrobatics and whistling, Break Machine get the show underway with their second and final top ten hit, peaking at number 9.

Deniece Williams – “Let’s Hear It For The Boy” (8)
Featuring some enthusiastic waving, this was Deneice's first hit for six years and was also her fourth and final top ten hit, taken from the movie Footloose, but it didn't quite make it to number one, as Simon so confidently predicted, stalling instead at number 2.

Ultravox – “Dancing With Tears In My Eyes” (29) (video)
With a nuclear power station about to go into meltdown, Midge decides to direct the video and Simon thinks it should win an award, for a single that became their third and final top ten hit, peaking at number 3. 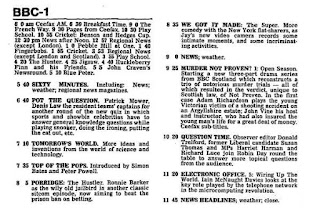 When You're Young and in Top of the Pops

It's the last day of my holiday today so again I'm posting this blog before getting the chance to watch the show. But at least on May 10th 1984 there were 9.6 million viewers, making it the 9th most popular BBC1 show that week. 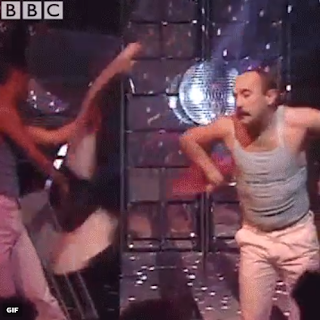 The latest Top of the Pops dance troupe might need a slight rethink.....

Bob Marley & The Wailers – “One Love-People Get Ready” (6) (video)
Went up one more place.

Duran Duran – “The Reflex” (1) (video)
Second of four weeks at number one.

Jeffrey Osborne – “Stay With Me Tonight” (24) (audience dancing/credits)
His first of two top 20 hits, this one peaking at number 18. 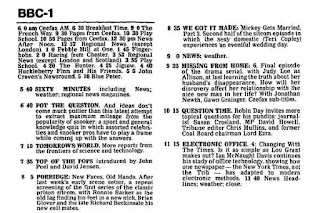 I'm not back from holiday just yet so I'm posting the blog for May 3rd 1984 before I've had a chance to watch it myself. 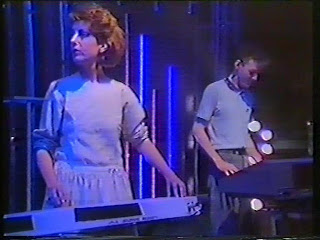 Gillian can barely contain her enthusiasm

Kenny Loggins – “Footloose” (28) (video)
His only top ten hit which peaked at number 6.

The Human League – “The Lebanon” (19)
Their first single in over a year brought to an end a run of six consecutive top ten hits when it peaked at number 11.

Duran Duran – “The Reflex” (1) (video)
The first of four weeks at number one.

Top of the Pops in Glove

I'm still on my hols so again I'm posting the blog for the April 26th 1984 edition prior to watching it :-) 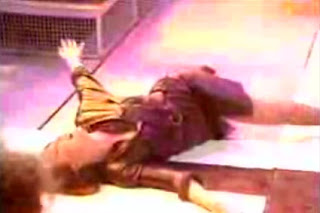 Being on Top of the Pops can be more tiring than you might think....

Belle & The Devotions – “Love Games” (39)
It's Eurovision time again ~ and this year's entry finished in 7th place, and the song peaked at number 11.

Bob Marley & The Wailers – “One Love-People Get Ready” (22) (video)
Somehow Bob had yet another posthumous hit up his sleeve, this one reaching number 5.

Duran Duran – “The Reflex” (5)
Soon to say hello to the number one spot.

Lionel Richie – “Hello” (1) (video)
And after six weeks at number one, it was time to say goodbye.

The Pointer Sisters – “Automatic” (20) (video/audience dancing/credits)
Their first hit for three years and it became their biggest when it peaked at number 2.

Don't Tell Top of the Pops

I'm on holiday just now so I'm posting this blog prior to watching this April 19th 1984 edition on BBC4. 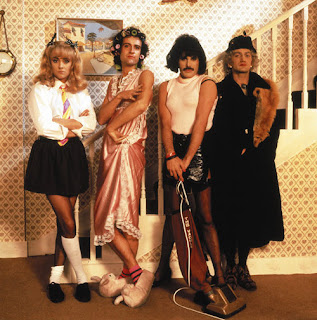 Queen clean up their act

The Special AKA – “Nelson Mandela” (9)
The getting the show underway for a second time, but the song was now at its peak.

Blancmange – “Don’t Tell Me” (15)
Became the duo's third and final top ten hit when it peaked at number 8.

OMD – “Locomotion” (19)
Became their first top ten hit for over two years when it reached number 5, but they'd have to wait seven more years for their next one.

Lionel Richie – “Hello” (1) (video)
Now in its fifth of six weeks at number one.

Kool & The Gang – “(When You Say You Love Somebody) In The Heart” (11) (audience dancing/credits)
The follow up to Joanna peaked at number 7.