Top of the Pops Colors

Red and yellow and pink and green, orange and purple and smoke - I can (almost) see a 23rd October 1986 edition of Top of the Pops! 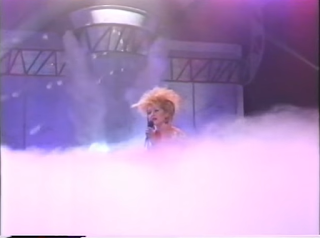 Girls just want to have fog

The Pretenders – “Don’t Get Me Wrong” (14)
Gettingthe show underway with what became their fourth of six top ten hits when it peaked at number 8.

Midnight Star – “Midas Touch” (10) (video)
The costumes stood out more than the song for me, but Midas Touch did reach number 8.

The Housemartins – “Think For A Minute” (22)
I liked the bit where they were all looking round for the phantom trumpet player :-) The song peaked at number 18.

Cyndi Lauper – “True Colors” (12)
I was a bit worried for her surrounded by all that smoke! It was a good song but number 12 was as high as it got.

Nick Berry – “Every Loser Wins” (1) (video)
Second of three weeks at number one.

Bangles – “Walk Like An Egyptian” (6) (video/credits)
A great video to end the show, and the song went up three more places.

Every Top of the Pops Wins

The good news is that BBC4 have confirmed The Story Of/Big Hits 1987 for the new year, so what better way to celebrate than with this 16th Ocober 1986 edition of Top of the Pops! 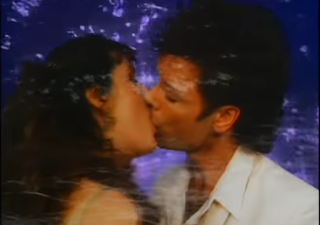 Pet Shop Boys – “Suburbia” (8)
Looking like they've just strolled in off the street to get the show underway, but Suburbia got no higher.

Cliff Richard & Sarah Brightman – “All I Ask Of You” (7) (video)
Cliff and Sarah get a little bit saucy and this tune from The Phantom of the Opera peaked at number 3.

Boris Gardiner – “You’re Everything To Me” (25)
Boris finally makes it into the studio to perform what became his final top 40 hit when it peaked at number 11.

Midnight Star – “Midas Touch” (22) (breaker)
Became their only top ten hit when it peaked at number 8.

Paul Hardcastle – “The Wizard” (23)
Paul seems to be having a blast performing the new Top of the Pops theme tune in the studio with his army of keyboards, and it peaked at number 15.

Nick Berry – “Every Loser Wins” (1) (video)
First of three weeks at number one.

Slip into your softest sandals, brightest tunic and most colourful headdress, and bring your best sand dancing moves to the 9th October 1986 edition of Top of the Pops! 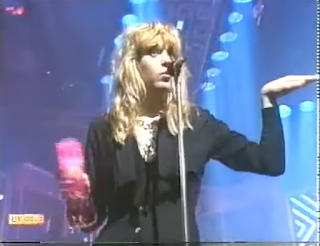 Bangles – “Walk Like An Egyptian” (20)
Flying in from LA to get the show off to a pharoah-ly good start with what became the second of their three top ten hits when it peaked at number 3.

Julian Cope – “World Shut Your Mouth” (28)
Clearly having far too much fun with that microphone, this arousing tune became his biggest solo hit, peaking at number 19.

Paul Young – “Wonderland” (24)
A bit of a slow builder this one, but once it got going it didn't sound half bad at all. However, number 24 was its peak.

Howard Jones – “All I Want” (35)
Loyal dancer Jed is back, this time sporting a quite nightmarish mask, for what would be Howard's final top 40 hit, and it got no higher than number 35.

Paul Simon – “You Can Call Me Al” (5) (video/credits)
A quirky video to end the show starring Chevy Chase for what became Paul's third and final solo top ten hit, taken from his mammoth number one album Graceland, when it peaked at number 4.

Forever Live & Top of the Pops

This edition of Top of the Pops from 2nd October 1986 will not be broadcast of BBC4 due to the unfortunate situation with Mike Smith's unsigned contract. So a huge thanks once again goes to the uploader for making it available here at WeTransfer. 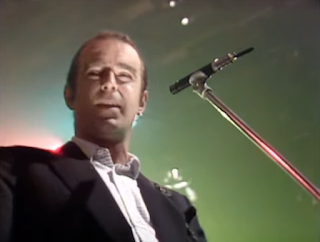 Status Quo – “In The Army Now” (29)
The Quo try their hand at a slightly new sound and are rewarded with a number 2 hit.

A-ha – “I’ve Been Losing You” (14) (breaker)
The first single from their number 2 album, Scoundrel Days, and it peaked at number 8.

The Communards – “Don’t Leave Me This Way” (1) (video)
Final week at number one.

Paul Hardcastle – “The Wizard” (not in chart) (video/credits)
The new theme tune released at last, and it peaked at number 15.

Don't Top of the Pops me This Way

Have a Pudsey Bear free zone for half an hour and catch this 25th September 1986 edition of Top of the Pops! 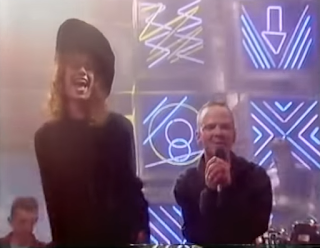 Don't leave me this hat

Amazulu – “Montego Bay” (23)
Getting tonight's show underway with what would be their final top 20 hit when this Bobby Bloom cover peaked at number 16.

Farley ‘Jackmaster’ Funk – “Love Can’t Turn Around” (10)
Darryl is back wriggling around on the floor with a live mic, but the song went up no further.

Paul Simon – “You Can Call Me Al” (26) (breaker)
Became his third and final top ten hit when it reached number 4.

Big Country – “One Great Thing” (19) (breaker)
A thumping food tune but it got no higher.

Loose Ends – “Slow Down” (29)
In the studio with a very animated performance, and the song went up two more places.


October 2nd is next but it's another Mike Smith edition.
Posted by Angelo at 14:16 44 comments:

Thorn in my Top of the Pops

Strap on your brightest codpiece and get ready to dance along with the 18th September 1986 edition of Top of the Pops! 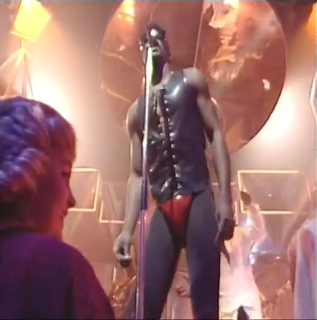 You've cod to be kidding me

Timex Social Club – “Rumors” (20)
'The' Social Club get the show off to a prompt start with their only hit, and it peaked at number 13.

Eurythmics – “Thorn In My Side” (10) (Montreux clip)
Their ninth and final top ten hit, on its way to number 5.

Michael McDonald – “Sweet Freedom” (17)
Live in the studio to perform what would be his third and final top 20 hit, Sweet Freedom peaking at number 12.

Genesis – “In Too Deep” (22) (breaker)
The second of five top 30 singles to come from their number one album, Invisible Touch. This one peaked at number 19.

Cameo – “Word Up” (6)
A legendary performance of course, and their only top ten hit, peaking at number 3.

The Communards – “Don’t Leave Me This Way” (1)
Another vibrant studio performance of 1986's biggest hit, now enjoying its second of four weeks at number one.

Top of the Pops This Way

This edition of Top of the Pops from September 11th 1986 will not be shown on BBC4 because of the Mike Smith contract debacle. So a huge thanks goes to the uploader for making it avaiable here at WeTransfer. 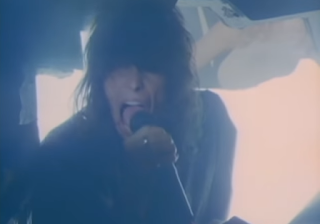 The Psychedelic Furs – “Pretty In Pink” (25)
Their biggest hit, peaking at number 18.

Eurythmics – “Thorn In My Side” (16) (breaker)
Became their 9th and final top ten hit when it peaked at number  5.

The Communards – “Don’t Leave Me This Way” (1) (video)
First of four weeks at number one.

You Give Top of the Pops a Bad Name

No one will blame you for not wanting to miss this 4th September 1986 edition of Top of the Pops! 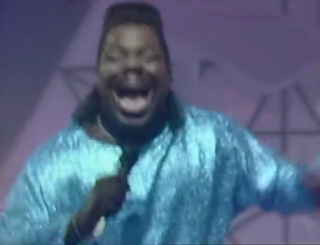 The Communards – “Don’t Leave Me This Way” (2)
An exhuberant performance to kick off an exciting show tonight, of what will be number one next week, and the biggest selling single of 1986.

MC Miker G & Deejay Sven – “Holiday Rap” (23)
Over from Holland to perform their only hit (thankfully!) which somehow peaked at number 6.

Farley ‘Jackmaster’ Funk – “Love Can’t Turn Around” (16)
Doing the live vocals whilst rolling around on the stage is Darryl Pandy, and this house music breakthrough hit peaked at number 10.

Frankie Goes To Hollywood – “Rage Hard” (6)
Returning to the studio with a scary new look and their first song for over a year and a half, which barring re-issues and re-mixes became their fifth and final top ten hit when it peaked at number 4.

Boris Gardiner – “I Want To Wake Up With You” (1) (video/credits)
Third and final week at number one.

I Want to Wake Up With Top of the Pops

Jermaine Stewart – “We Don’t Have To Take Our Clothes Off” (6)
Getting tonight's show underway with his first of two top ten hits, this one being his biggest when it peaked at number 2.

Jaki Graham – “Breaking Away” (16)
Performing in the studio but the song got no higher.

Daryl Hall – “Dreamtime” (28) (breaker)
His first and biggest solo hit, but it got no higher.

The Human League – “Human” (10)
Phil if anything looking younger than he did five years earlier when he used to have his trademark long hair, and this song went up two more places.

Boris Gardiner – “I Want To Wake Up With You” (1) (video)
Second of three weeks at number one.

Brother Top of the Pops

Time to leave those holiday discos behind for another year and tune in to this 21st August 1986 edition of Top of the Pops! 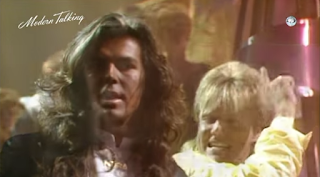 Bruce Hornsby & The Range – “The Way It Is” (23)
In the studio with this impressive tune which was on its way to number 15.

The Human League – “Human” (19) (breaker)
Became their first top ten hit for three years when it peaked at number 8.

Modern Talking – “Brother Louie” (12)
It's the time of year when those two wet gits with their girly curly hair ....... Actually, they might be a sort of German version of Black Lace, but the song is very catchy and deservedly reached number 4, though we never heard from this pair again.

Boris Gardiner – “I Want To Wake Up With You” (1) (video)
First of three weeks at number one for Boris - shame he didn't make it into the studio.

The Communards – “Don’t Leave Me This Way” (28) (video/credits)
And here's the song that will replace Boris next month.

Anyone Can Top of the Pops 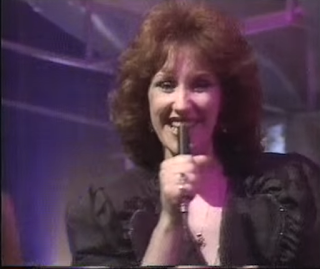 It Bites – “Calling All The Heroes” (10)
Getting the show off to a snappy start and the song went up to number 6.

Lionel Richie – “Dancing On The Ceiling” (18) (video)
On his way to the dizzy heights of number 7.

Anita Dobson – “Anyone Can Fall In Love” (4)
Looking far too glamourous for the Queen Vic, Anita makes her studio debut and the theme tune for Eastenders proved to be no duff duff, peaking at number 4.

Chris De Burgh – “The Lady In Red” (1)
His third week at number one, not his fourth like Simon said, and another live rendition, this time at the piano, and at the end in the lady in red herself appears with a bouquet of flowers for him!