Hold On, Top of the Pops

Everybody's looking for the 23rd March 1989 edition of Top of the Pops! 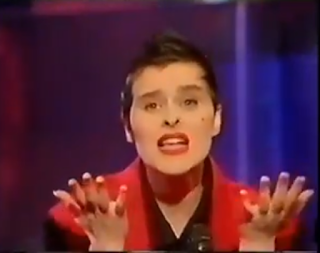 The Reynolds Girls – “I’d Rather Jack” (10)
Getting us underway for a second time and the song went up two more places.

Alyson Williams – “Sleep Talk” (18)
Making her studio debut and her tune went up one more place.

Coldcut featuring Lisa Stansfield – “People Hold On” (24)
Lisa makes her studio debut and this tune became her first of seventeen top 40 hits when it peaked at number 11.

Kim Wilde – “Love In The Natural Way” (32)
In the studio tonight but this one got no higher.

Top of the Pops Rescue

There's danger on the way, but you won't need to pray, because the 16th March 1989 edition of Top of the Pops are go! 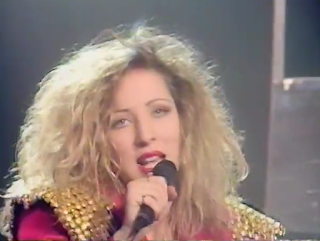 New Order – “Round & Round” (22)
Getting us underway tonight and the song went up one more place.

Gloria Estefan – “Can’t Stay Away From You” (7) (rpt from 16/02/89)
They're getting their value for money with this clip, aren't they? This is its third outing. But the song was now at its peak.

Fuzzbox – “International Rescue” (23)
They shortened their name from We've Got A Fuzzbox And We're Gonna Use It, and this song became their biggest hit when it peaked at number 11.

Jason Donovan – “Too Many Broken Hearts” (1) (video)
Second and final week at number one.

I'd Rather Top of the Pops

Golden oldies, Rolling Stones,we don't want them back, I'd rather the 9th March 1989 edition of Top of the Pops! 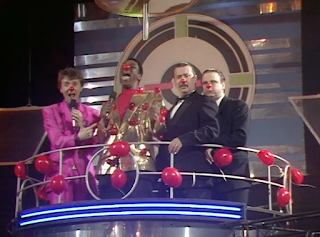 They never play the songs we nose

The Reynolds Girls – “I'd Rather Jack” (17)
Getting this Red Nose Day special underway their only hit and it peaked at number 8.

Dusty Springfield – “Nothing Has Been Proved” (16)
In the studio performing the theme song from the Christine Keeler movie 'Scandal' this Pet Shop Boys composition was at its peak.

Womack & Womack – “Celebrate The World” (24)
Singing live in the studio this final top 40 hit for the duo peaked at number 19.

Deacon Blue – “Wages Day” (18)
Perhaps not their best ever tune but this was an absolute storming live performance but the song went up no higher.

Paula Abdul – “Straight Up” (15)
Making her studio debut with her first of three top ten hits and it peaked at number 3.

Donna Summer – “This Time I Know It’s For Real” (11)
Performing in the studio and the song peaked at number 3.

Jason Donovan – “Too Many Broken Hearts” (1) (video)
First of two weeks at number one.

And for a little bit of extra-time fun tonight, can you work out what songs Pan's People are dancing to here without the sound? 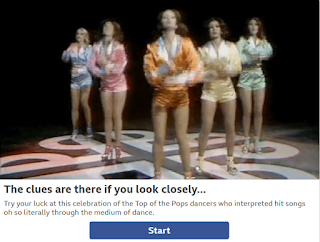 Too Many Broken Top of the Pops 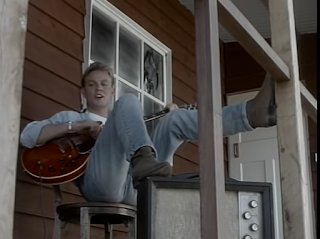 Bottom of the Pops

Living In A Box – “Blow The House Down” (17)
Getting us underway with a catchy number that I feel would have quite suited Jason Donovan, and it went up seven more places to peak at number 10.

Jason Donovan – “Too Many Broken Hearts” (9) (video)
Will be number one next week.

Tyree featuring Kool Rock Steady – “Turn Up The Bass” (16)
Live in the studio - couldn't tell if the mic was live or not? And it went up four more places.

Donna Summer – “This Time I Know It’s For Real” (30) (breaker)
Became her first top ten hit for ten years when it peaked at number 3.

Texas – “I Don’t Want A Lover” (8)
Back in the studio with a terrific live vocal but the song was at its peak.

Poison – “Every Rose Has Its Thorn” (14) (video/credits)
Went up one more place.

Hey Top of the Pops Lover

L-o-v-e across the nation, I wanna take you to the 23rd February 1989 edition of Top of the Pops!

S’Express – “Hey Music Lover” (14)
They ended the last show and get us underway this time and the song made it to number 6.

Michael Jackson – “Leave Me Alone” (4) (video)
This eighth single from his Bad album peaked at number 2.

Edie Brickell & The New Bohemians – “What I Am” (32)
Flying in from Texas but this cool tune surprisingly only went up one more place.

Dusty Springfield – “Nothing Has Been Proved” (28) (breaker)
From the movie Scandal and it peaked at number 16.

Hue & Cry – “Looking For Linda” (16)
A second live studio performance and the song went up one more place.

Michael Ball – “Love Changes Everything” (2)
No doubt he's singing it live this time - he really belts out this cracking tune but number 2 was as high as it got.

I Don't Want A Top of the Pops 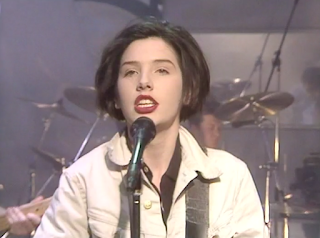 Def Leppard – “Rocket” (20)
We blast off tonight with Def Leappard and the song went up five more places.

Simple Minds – “Belfast Child” (2) (video)
Will become their only number one next week.

Gloria Estefan – “Can’t Stay Away From You” (33)
Doing it live in the studio and the song peaked at number 7.

Texas – “I Don’t Want A Lover” (21)
Making their studio debut with a song that became their first of thirteen top ten hits when it peaked at number 8 - but they won't have their second one for another eight years!

Sam Brown – “Stop” (17)
Also making her studio debut and this song became her only top ten hit when it peaked at number 4.

The Style Council – “Promised Land” (32)
Performing a sort of piano sandwich in the studio here with what was to be their final top 40 hit when it peaked at number 27.

The Last of the Famous International Top of the Pops

Reggie Kray do you know the 9th February 1989 edition of Top of the Pops? 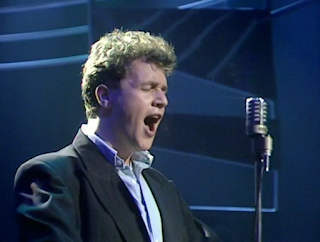 Top of the tonsils

Samantha Fox – “I Only Wanna Be With You” (20)
Getting us underway with this Dusty Springfield cover which peaked at number 16.


Rick Astley – “Hold Me In Your Arms” (26)
Became Rick's penultimate top ten hit when it peaked at number 10.

Hue & Cry – “Looking For Linda” (23)
In the studio performing what sounds like a live vocal and the song peaked at number 15.

Michael Ball – “Love Changes Everything” (12)
In the studio but disappointingly not singing a live vocal, but the song very much became his signature tune and his only top ten hit peaking at number 2.

Morrissey – “The Last Of The Famous International Playboys” (6)
Not looking particularly playboyish with his shirt hanging out, and the song got no higher.

Mike & The Mechanics – “The Living Years” (2) (video/credits)
Just couldn't knock Marc and Gene off the top.