Say I'm Your Top of the Pops

Its August 8th 1985, but there's no holiday for Simon and Richard as they host this live edition of Top of the Pops! 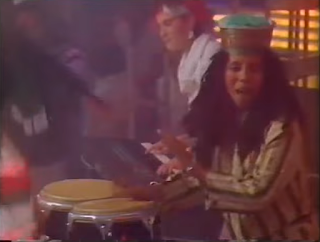 Amazulu – “Excitable” (25)
Getting this live show underway with their debut hit which peaked at number 12.

Dire Straits – “Money For Nothing” (4) (video)
With a little vocal help from Sting, this second single from their huge number one album Brothers in Arms was now at its peak.

Princess – “Say I’m Your Number One” (31)
Making her debut with what be her only top ten hit when it peaked at number 7.

Maze featuring Frankie Beverly – “Too Many Games” (36) (breaker)
His biggest hit but it got no higher.

Madonna – “Into The Groove” (1) (video)
Second of four weeks at number one.

Madonna – “Holiday” (5) (audience dancing/credits)
And Madge gets the rare honour of having a second song played on the same show. It had been her debut hit peaking at number 6 a year earlier, but this time it went up to number 2.

In Between Top of the Pops

This edition of Top of the Pops from August 1st 1985 will not be shown on BBC4 because of the ongoing dispute between Mike Smith and the BBC. But have no fear, your Good Friday has just got even better with thanks to Crystal who has made it available here at WeTransfer 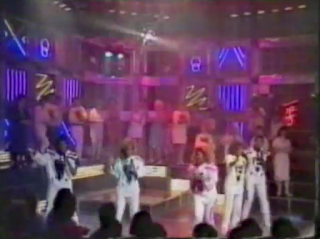 There's only one 'F' in Five Star

Madonna – “Into The Groove” (1) (video)
First of four weeks at number one.

Living on Top of the Pops

It's summertime and the living on Top of the Pops 1985 is easy! 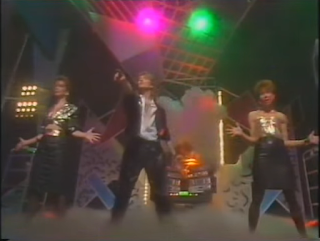 When you forget to bring your semaphore flags

Arrow – “Long Time” (36)
After a little edit to snip Gary Davies' suntan joke we get off to a very summery start to tonight's show and Long Time became Arrow's only top 30 hit when it peaked at number 30.

Madonna – “Into The Groove” (4) (video)
Following Live Aid, Madonna's career went into orbit and Into the Groove became her first of 13 number ones.

Dire Straits – “Money For Nothing” (15) (breaker)
Another act who got a huge live Aid boost - this tune peaked at number 4.

Trans X – “Living On Video” (10)
Sounding very European, although they were from Canada, the song went up one more place and was their only hit.

Eurythmics – “There Must Be An Angel (Playing With My Heart)” (1) (rpt from 11/07/85)
Shame they couldn't make it into the studio for a new performance of what would be their only week ever at number one.

August 1st is next but its another Mike Smith one.
Posted by Angelo at 12:55 52 comments:

All Night Top of the Pops

This edition of Top of the Pops from July 18th 1985 will not be shown on BBC4 because Mike Smith did not sign his repeats contract. So a huge thanks goes once again to Neil B for making it available here at We Transfer. 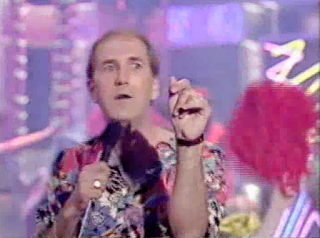 The shirt must go on

Simply Red – “Money’s Too Tight (To Mention)” (13)
Making their studio debut with a live vocal but the song got no higher.

Russ Abbot – “All Night Holiday” (25)
Making his debut in the studio as a performer, this song peaked at 20.

The Cult – “She Sells Sanctuary” (19)
Another studio debut, and the song peaked at number 15.

Live is Top of the Pops

Alright! Alright! Calm down! Calm down! John is back tonight to help Janice host this 11th July 1985 live edition of Top of the Pops! 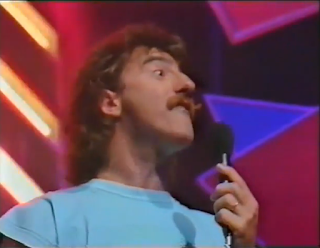 The Conway Brothers – “Turn It Up” (18)
This one hit boy band get tonight's live show underway, and considering there was four of them they could have done with turning up the vocal volume a notch! The song peaked at number 11.

Eurythmics – “There Must Be An Angel (Playing With My Heart)” (10)
Would become the duo's only number one hit in two weeks time.

Opus – “Live Is Life” (15)
With those perms and tashes they looked more like a scouse version of Black Lace than an Austrian one! The song peaked at number 6.

Russ Abbot – “All Night Holiday” (35) (breaker)
This follow up to Atmosphere was Russ's final hit and it peaked at number 20.

Denise LaSalle – “My Toot Toot” (7)
Live in the studio, looking like the love child of Tina Turner and Divine, performing her only hit, and it reached number 6.

Animal Nightlife – “Love Is Just The Great Pretender” (37) (audience dancing/credits)
Their second and final top 40 hit, it peaked at number 28. And we are reminded in big letters that Live Aid is happening on Saturday.

Top of the Pops Over Heels

It might have been Independence Day in America but on this side of the Pond the 4th July 1985 was Top of the Pops day! 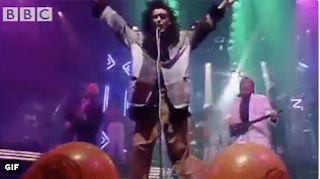 Dead Or Alive – “In Too Deep” (19)
This third single from their top ten album Youthquake peaked at number 14.

The Damned – “The Shadow Of Love” (25)
Performing a kind of gothic cowboy song which did not get any higher up the charts.

Opus - "Live Is Life" (26) (breaker)
Oh my word, BBC4 let a mention of Jonathan King slip through the net! Let's pray the world doesn't come to an end! Anyhow, this was the only hit for Opus, and it peaked at number 6.

Top of the Pops of Memories

This edition of Top of the Pops from 27th June 1985 will not be shown on BBC4 unfortunately because Mike Smith refused to sign a repeats contract. So a huge thanks once again goes to Neil B for making it available here at WeTransfer. 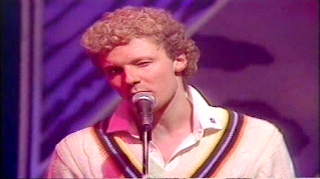 The Commentators – “N-N-Nineteen (Not Out)” (23)
The perfect chart peak for this Rory Bremner spoof would have been number 19 of course, but alas it was not to be, and the pesky thing made it to number 13 instead!

Sister Sledge – “Frankie” (1)
We appear to be one sister short for this first of four weeks at number one.

The Conway Brothers – “Turn It Up” (30) (audience dancing/credits)
Their only hit and it peaked at number 11.

Top of the Pops Come Home 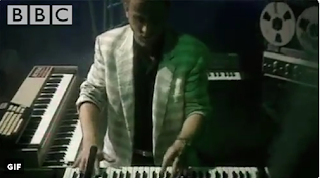 All the other acts were wondering where their keyboards had gone....

Fine Young Cannibals – “Johnny Come Home” (15)
Roland and his flesh eating friends get the show underway this week and the song went up ten more places.

Sting – “If You Love Somebody Set Them Free” (28)
This first single from his top 3 album 'The Dream of the Blue Turtles' only went up two more places.

Mai Tai – “History” (9)
A second appearance in the studio for the trio and History went up one more place.

Harold Faltermeyer – “Axel F” (10)
In the studio with all his keyboards to mime this instrumental which peaked at number 2.

Crazy For Top of the Pops

Maybe you need to be in a straitjacket not to watch this peach of an edition from 13th June 1985 of Top of the Pops! 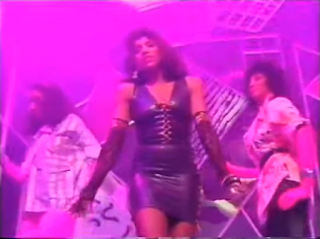 Busting up the charts

Sister Sledge – “Frankie” (11)
The sisters squeeze into the studio with a song that will be number one in two weeks time.

Harold Faltermeyer – “Axel F” (30) (breaker)
From the movie Beverley Hills Cop this was Harold's only top 40 hit, peaking at number 2.

Billy Ocean – “Suddenly” (4)
A second studio performance from Billy but Suddenly was now at its peak.

Marillion – “Kayleigh” (2)
Fish has got his full dress kilt on this time but Kayleigh was another song also at its peak.

The Crowd – “You’ll Never Walk Alone” (1) (video)
We didn't get to hear very much of it, did we? First of two weeks at number one.

Top of the Pops in the Fields

It's the summer of 1985, the sky is blue, the meadows are lush and green and the 6th June edition of Top of the Pops is here! 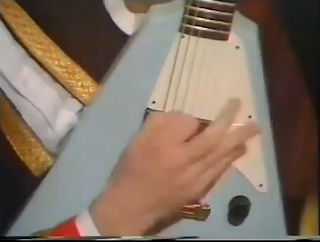 Gary Moore & Phil Lynott – “Out In The Fields” (5)
The Thin Lizzie duo get the show underway this week but the song went up no higher.

The Crowd – “You’ll Never Walk Alone” (4) (video)
It was a dark time for football, and this charity record was in aid of the Bradford City fire. It would be next week's number one.

Top of the Pops on the Cake

Janice is all dressed up pretty as a birthday cake but John has gone and stood her up in the studio on this very very live edition of Top of the Pops from 30th May 1985! 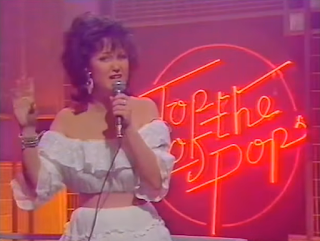 It's my Top of the Pops and I'll introduce Stephen Tin Tin Duffy if I want to!

Stephen Tin Tin Duffy – “Icing On The Cake” (20)
The birthday boy gets tonight's show underway and his song went up six more places.

Billy Ocean – “Suddenly” (19)
Live in the studio with his own version of Lionel Richie's Hello which peaked at number 4.

Five Star – “All Fall Down” (30) (audience dancing/credits)
The beginning of an incredibly successful three years for the group, this debut hit peaked at number 15.

Top of the Pops on Sunshine

Forget all about the beast from the east for a while and instead warm your cockles up with this May 23rd 1985 edition of Top of the Pops! 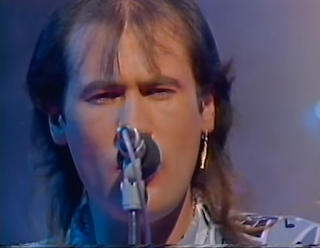 Something fishy going on

Go West – “Call Me” (17)
The show starts enthusiastically and Call Me peaked at number 12.

Katrina & The Waves – “Walking On Sunshine” (20) (video)
A somewhat grim video to accompany this spring time song that peaked at number 8.

Marillion – “Kayleigh” (7)
Getting rid of the weird make-up and going all mainstream paid off for Fish and the boys and Kayleigh went up five more places.

Stephen Tin Tin Duffy – “Icing On The Cake” (35) (breaker)
Could have been such a perfect name for his final hit had it not peaked at number 14.

Paul Hardcastle – “19” (remix) (1) (video)
A freshened up version for its third of five weeks at number one.

Slave to Top of the Pops

What better master could possibly own you tonight? So give your chains a thankful rattle and enjoy this 16th May 1985 edition of Top of the Pops! 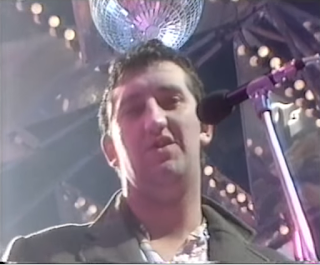 Kim Wilde – “Rage To Love” (22)
Kim gets her Suzi Quatro leathers on to get tonight's show off to a rockabilly start with a song that peaked at number 19.

Bryan Ferry – “Slave To Love” (14) (video)
As you might expect Bryan serves up a sexy video to go with his sophisticated final top ten song, (taken from his number one album Boys and Girls) that peaked at number 10.

Duran Duran – “A View To A Kill” (7) (video)
Le Bon, Simon Le Bon and the gang get up to all manner of secret agent stuff up the Eiffel Tower with this Bond theme that peaked at number 2.

Depeche Mode – “Shake The Disease” (25) (breaker)
It would be five long years before their next top ten hit. This one peaked at number 18.

Marillion – “Kayleigh” (15) (breaker)
Now this one really was a breaker. Peaking at number 2, it was the band's biggest hit and their first of three top ten hits.