The Bucket of Water Top of the Pops

The edition of Top of the Pops from the 15th May 1980 will be skipped by BBC4 because it was hosted by DLT. But a big thanks to Steve H who has put the edition online at 4Shared.  And thanks also to Sean for putting it up at Vimeo

For me there's three standout performances on this show ~ Squeeze with their excellent follow-up to Another Nail in my Heart, seemingly a perfect song for the summer but amazingly it failed to make the top 40, so wasn't on the show again; similarly Peter Gabriel's follow-up to Games Without Frontiers, which also marks an ultra-rare studio appearance; and lastly of course the Tiswas invasion.... 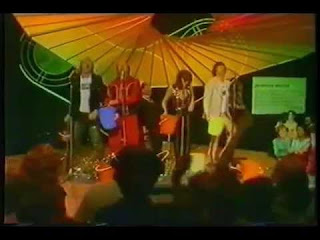 They let us use real buckets of water on ITV!

It's the 8th of May 1980 and this edition of Top of the Pops sees the debuts of two of the biggest electropop acts of the decade......... 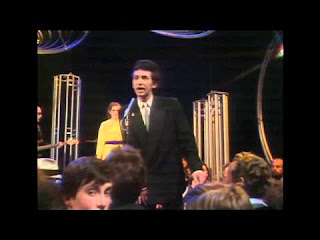 
MYSTIC MERLIN – Just Can’t Give You Up
Plays over the charts with their only hit, which peaked at 20.

THE HUMAN LEAGUE – Rock And Roll
They clearly weren't quite the finished article yet, and two of them would soon leave to form Heaven 17, but brave of the Beeb to include this Gary Glitter cover, which failed to make the top 50, in the 7.30pm showing.

JOHNNY LOGAN – What’s Another Year?
was edited out of the 7.30 showing.

MICHAEL JACKSON – She’s Out Of My Life (video)
Seemingly doing a bit of a Leo Sayer here, this was the 4th top ten hit from his Off the Wall album.

MATCHBOX – Midnite Dynamos
A mix of the video and a Showaddywaddy style double studio performance helping Midnite Dynamos up to a peak of 14 in the charts.

AVERAGE WHITE BAND – Let’s Go Round Again (danced to by Legs & Co)
It must've been very hot in May 1980 as Legs & Go get down to the beach for this week's routine, bringing Peter Powell out into a bit of a sweat.

JONA LEWIE – You’ll Always Find Me In The Kitchen At Parties
The first of two top 20 hits for Jona in 1980, both of which being quite memorable. One of the girl backing singers on show here is Kirsty MacColl.

COCKNEY REJECTS – The Greatest Cockney Rip-Off ®
Were ripped out of the 7.30pm showing.

BONEY M – My Friend Jack (video)
Also edited out was our final look at the original line-up of Boney M, whose chart career was now over.

THE RUTS – Staring At The Rude Boys ®
The final hit for the Ruts, peaking at 22. Singer Malcolm Owen died in July 1980.

ORCHESTRAL MANOEUVRES IN THE DARK – Messages
Unlike the Human League, OMD arrived at Top of the Pops fully formed and Messages became the first of 15 top 20 hits for the band.

THE UNDERTONES – My Perfect Cousin
Chopped from the 7.30 show, now almost at its peak in the charts.

DEXY’S MIDNIGHT RUNNERS – Geno ®
A second week at number one, having held off Paul McCartney last week, and Johnny Logan this.

HOT CHOCOLATE – No Doubt About It (and credits)
Over the credits this week is Hot Chocolate rapidly rising towards the top two.

Next week should be the edition from May 15th, but the BBC are still not showing DLT episodes, so instead we will move on to the 22nd May 1980.
Posted by Angelo at 13:02 83 comments:

This World of Top of the Pops

May 1980 arrives which means just five more editions left (and one of them is a DLT) until the strike which took the show off the air for ten long weeks throughout the whole of June and July. Tonight's show is from the time of the Iranian embassy siege in London and it also marks the debut of a new presenter ~ Tommy Vance........ 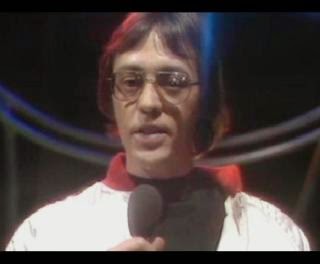 er..... why wasn't I introduced last week like everyone else?

(12) LEON HAYWOOD – Don’t Push It, Don’t Force It (and charts)
Playing over the chart rundown this week is Leon Haywood's only hit, now at its peak.

(38) NEW MUSIK – This World Of Water
The men in white are back in the studio though this record didn't go quite as swimmingly as Living By Numbers and peaked just outside the top 30.

(19) NARADA MICHAEL WALDEN – I Shoulda Loved Ya (video)
This was to become the first of American producer (Whitney Houston, Starship) Narada Micheal Walden's two number 8 hits, though oddly he would have to wait another 8 years for his second one.

(57) THE CHORDS – Something’s Missing
This was the second of four singles in 1980 from Jam wannabes The Chords, but all of them were missing from the top 30.

(13) RODNEY FRANKLIN – The Groove (danced to by Legs & Co)
After checking out the groove the other week, Legs & Co now check out the sofa for this week's groovy routine.

(30) WHITESNAKE – Fool For Your Loving (video)
Fool for you Loving became the first top 20 hit for the sons of Deep Purple, making it to 13.

(36) JIMMY RUFFIN – Hold On To My Love
Written by Robin Gibb and Blue Weaver, Hold on to my Love was to be Jimmy Ruffin's final top ten hit in the UK, reaching number 7.

(31) HOT CHOCOLATE – No Doubt About It
How could they even think of editing out this one?

(25) THE NOLANS – Don’t Make Waves
And the Nolans also went under the editor's knife.

(58) THE BEAT – Mirror In The Bathroom
Perform perhaps their finest and best known hit with both Dave Wakeling and Rankin Roger taking turns on lead vocal, although I think in reality it was Dave's vocals we heard.

(29) KATE BUSH – Breathing (video)
Breathing was the first single to come from Kate's third, and first number one, album Never Forever. It peaked at 16 in the charts.

(1) DEXY’S MIDNIGHT RUNNERS – Geno
'A deserved' number one for Dexy's Midnight Runners who surprisingly replaced Blondie's Call Me after just one week, and they celebrated by performing beneath a big number 1 sign.

(15) JOHNNY LOGAN – What’s Another Year? (and credits)
Playing over the credits and heading to number one is 1980's Eurovision winner.

In a sad week where we said goodbye to the wonderful Errol Brown, who we've seen performing with Hot Chocolate several times during these BBC4 reruns and who we'll see again very very soon, we arrive at April 24th 1980..... 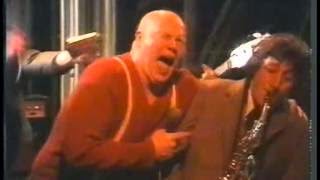 Honk if you're a sax maniac!

(50) SMOKIE – Take Good Care Of My Baby
Covering Bobby Vee's 1961 hit here are Smokie with what would become their last chart hit for 15 years.

(7) PAUL McCARTNEY – Coming Up (video)
Love this video in which Paul simultaneously plays parodies of various pop legends including Hank Marvin, Ron Mael and himself as a Beatle. Coming Up was a song that is said to have impressed John Lennon so much that he decided to come out of retirement.....

(41) THE CURE – A Forest
With their first hit and no big hair in sight just yet, A Forest peaked just outside the top 30.

(30) ELVIS COSTELLO & THE ATTRACTIONS– Hi Fidelity (video)
A lively song and video from Elvis but it got no higher in the charts than 30.

(47) COCKNEY REJECTS – The Greatest Cockney Rip-Off
Straight off the Upton Park football terraces and into the charts with the first of two top 40 oi hits.

(36) BAD MANNERS – Ne-Ne Na-Na Na-Na Nu-Nu
The studio debut for Bad Manners, shaking the stage with the first of their nine top 40 hits

(21) THE UNDERTONES – My Perfect Cousin ®
Another victim of the 7.30 edit, but we have seen this one previously.

(1) BLONDIE – Call Me (video)
What do we see here? A video from a movie being aired on BBC4! Well, it did only spend one week at number one but even so it was nice to see the original clips from American Gigolo.

(2) DEXY’S MIDNIGHT RUNNERS – Geno (and credits)
The Dexy's play us out this week on their way to being next week's number one.

Missing Top of the Pops

The edition of Top of the Pops from 17th April 1980 was presented by JS and so won't be shown on BBC4. But once again, Neil B has a copy and has uploaded it to 4shared. It doesn't seem to want to stream on my computer but here is the link if you want to give it a try ~ TOTP 17 April 1980

But we do have the running order courtesy of Popscene and some Youtube clips (though not necessarily from the 17th April edition):~ 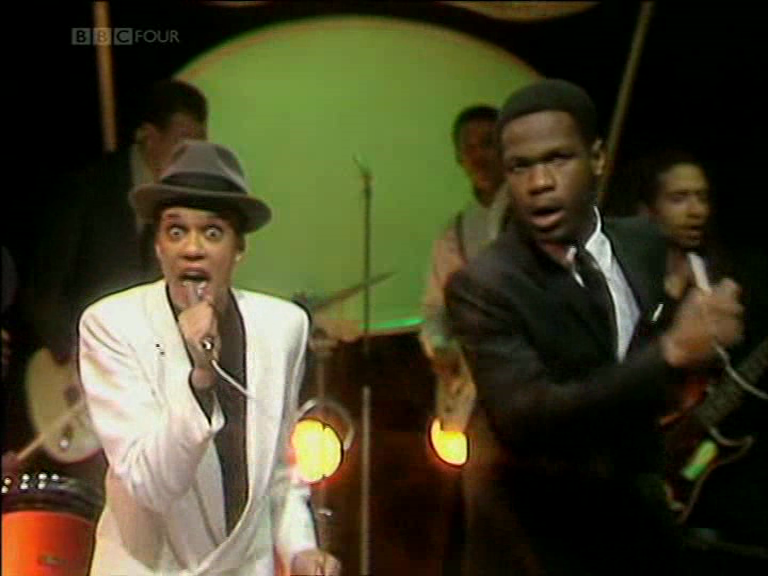 The Selecter are told who is presenting this week's show...

(11) BARBARA DICKSON – January February ®
A repeat showing for this song now at its peak in the charts.

(50) GIRL – Hollywood Tease
The only charting single for this UK group, and their Top of the Pops performance didn't do them any good, Hollywood Tease got no higher than 50 in the charts. You can see a few seconds of it in the Legs & Co clip below..

(2) BLONDIE – Call Me (danced to by Legs & Co)
Legs & Co dance to Blondie once more, and Call Me would be number one next week.

(19) B.A. ROBERTSON – Kool In The Kaftan ®
A repeat showing here for Kool in the Kaftan almost at its peak of number 17.

(51) THE RUTS – Staring At The Rude Boys
This was to become the band's third and final top 30 hit.

(12) DEXY’S MIDNIGHT RUNNERS – Geno
Still climbing and on its way to number one.

(34) THE NOLANS – Don’t Make Waves
This follow up to I'm in the Mood for Dancing also did quite well, making it to number 12.

(1) THE DETROIT SPINNERS – Working My Way Back To You – Forgive Me Girl (Medley) (video)
A final week at number on for this last hurrah of the 70's.