Top of the Pops Caterpillar

This mini edition of Top of the Pops from April 12th 1984 will not be shown on BBC4 due to one of the hosts being DLT. So a big thanks goes to David Marlborough for making (most of) it available here at WeTransfer 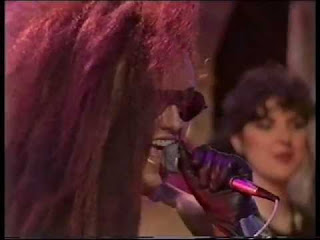 That's the way I comb it

Then we get a Top Ten Video show.

Lionel Richie – “Hello” (1) (video)
I forgot to count April 5th, so this is actually the fourth of six weeks at number one for Lionel.

Rufus & Chaka Khan – “Ain’t Nobody” (13) (video/audience dancing/credits)
This was Chaka's first hit since I'm Every Woman, over five years earlier! It peaked at number 8.

Top of the Pops Horses

Sit in your saddle, grab the reins and giddy up, it's time to take Trot of the Pops from March 29th 1984 out for a ride! 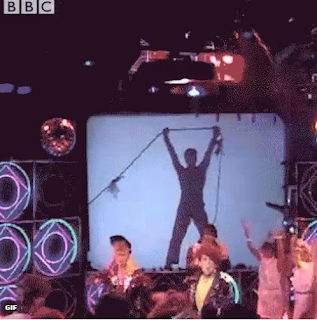 The Special AKA – “Nelson Mandela” (29)
With their first top 30 hit since Ghost Town way back in 1981, albeit with a much changed line-up, this was the Specials 8th and final top ten hit, peaking at number 9.

John Lennon – “Borrowed Time” (33) (video)
The second and final single from the Milk & Honey album, it went up one more place.

Captain Sensible – “Glad It’s All Over” (36)
I always confused this with You Take Me Up at the time, though I preferred this one. It peaked at number 6 and was the Captain's final top 40 hit.

Siouxsie & The Banshees – “Swimming Horses” (28)
Flying in from France to perform in the studio but this unusual single rose no further.

Madonna – “Lucky Star” (27) (video)
This follow up to Holiday peaked at number 14, and then came an incredible run of 34 consecutive top ten hits that stretched ten years!

Thompson Twins – “You Take Me Up” (13)
All clad in leather jackets to perform the third, and biggest, hit from their number one album Into the Gap, it peaked at number 2, but it was also to be their final top ten hit.

If you want to sing along with Lionel, flick through Smash Hits from 15 March 1984 for the lyrics. #TOTP https://t.co/z6mzlHtIFx


Industrial action meant that there was no April 5th edition, so the next one was April 12th, albeit a very short one, and also one of the hosts was DLT. So the next one we will see on BBC4 will be from April 19th 1984.
Posted by Angelo at 13:14 104 comments:

A Top of the Pops Worth Waiting For

Janice smiles nervously, a bead of sweat glistens on her flushed skin, her heart beating a little faster as she feels the firmness of the throbbing microphone between her eager fingers. She's never done it with Peter before and she's excited by the thought of 10.5 million people who just can't wait to watch the action on Top of the Pops, March 22nd 1984. 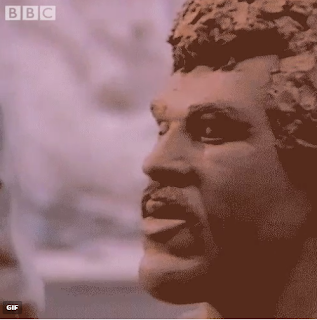 Hello, is it a creepy sculpture of my head you're looking for?

Depeche Mode – “People Are People” (29)
The ever more gothic Depeche Mode get us underway this week with what would become their joint biggest hit, peaking at number 4.

The Weather Girls – “It’s Raining Men” (5) (video)
Still storming up the charts and the forecast is that it will peak at number 2.

Shakin’ Stevens – “A Love Worth Waiting For” (22)
With his 'fifteenth consecutive hit' which peaked at number 2.

Culture Club – “It’s A Miracle” (14) (video)
'The story of the band so far' and the fourth and final single from their number one album Colour By Numbers, it peaked at number 4.

UB40 – “Cherry Oh Baby” (28)
The fourth and final single from their number one album Labour of Love. and Peter Powell's favourite, it peaked at number 12.

Sade – “Your Love Is King” (9)
With a very similar performance to last time, but at least they spelled her name correctly tonight! It went up three more places.

Lionel Richie – “Hello” (1) (video)
The first of five weeks at number one. 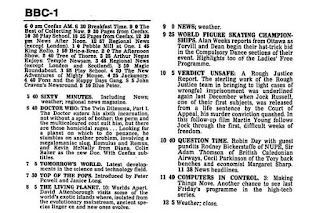 Dance Hall Top of the Pops 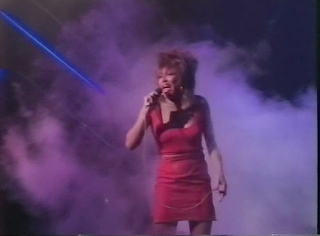 No amount of Help could get Tina higher up the charts

Julia & Company – “Breakin’ Down (Sugar Samba)” (15)
Flying in from America to get this live show underway with a live vocal, but number 15 was its peak.

Lionel Richie – “Hello” (5) (video)
With his 'story video' on its way to number one of course.

Tina Turner – “Help” (40)
A live studio performance from Tina but this Beatles cover got no higher.

Top of the Pops and Seek

Close your eyes and count down from forty and there's a live edition of Top of the Pops from March 8th 1984 for you to find, but you won't be playing alone, there's another 9.65 million people helping you look! 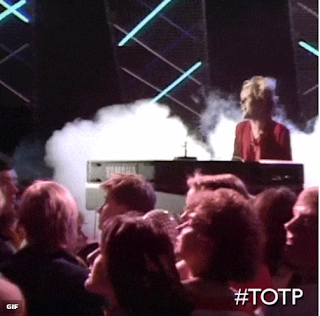 The Weather Girls – “It’s Raining Men” (36)
Like a bolt of lightening, this song seemed to come from nowhere and electrify the charts all the way to number 2. But it was the only hit for the duo, though Martha Wash went on to have a couple of solo top tenners in the 90's.

Tracey Ullman – “My Guy” (32) (video)
She did make some very entertaining videos, and this time the surprise guest star is Neil Kinnock! But sadly Tracey's pop career was already on the wane and this Madness cover peaked at number 23.

Sade – “Your Love Is King” (37)
There are some genuine 'wow' moments on Top of the Pops, and this has got to be one of them - the debut of Sade, with what was, almost unbelievably, her only top ten hit, peaking at number 6.

Bananarama – “Robert De Niro’s Waiting” (38)
Number 3 was the highest the girls ever peaked in the charts, and this dance floor filler was the first of their three number threes.

Howard Jones – “Hide & Seek” (12)
I remember watching this totally live performance at the time and being truly impressed, it was the first time I'd been aware of anyone doing it live on Top of the Pops (I must've missed New Order) and on a live show too! ~ But number 12 was its peak. 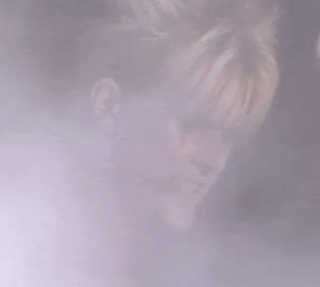 Mel Brooks – “To Be Or Not To Be (The Hitler Rap)” (31) (video/credits)
Straight after a German band we get ........ this. Taken from the soundtrack of the movie of the same name, although it didn't appear in the movie itself, it peaked at number 12. 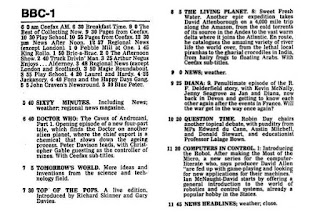 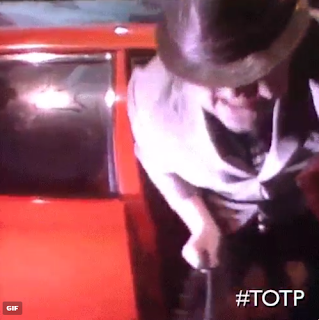 Would you buy a second hand Top of the Pops from this man?

Matt Bianco – “Get Out Of Your Lazy Bed” (17)
A buoyant start to a bouncy show and the song boing boinged up two more places.

Van Halen – “Jump” (20) (video)
Leaping into the charts with their first of two top ten hits, Jump being the biggest reaching its apex at number 7.

Alexei Sayle – “Ullo John Gotta New Motor?” (35)
Alexei goes from 0 to 60 in about 1 second flat with his dance routine and drives his Motor up twenty more places in the chart!

Break Machine – “Street Dance” (11)
Their dancing was obviously not quite up to Alexei Sayle's standard, but they didn't do too shabbily, and Street Dance went up to number 3.

Wang Chung – “Dance Hall Days” (42)
Performing their only hit and it peaked at number 21.

Wouldn't it be Top of the Pops

Welcome to this edition of Top of the Pops from February 23rd 1984, which, due to a scenery workers strike, came live from 'the canteen' but that didn't stop 9.7 million diners merrily munching on the music. 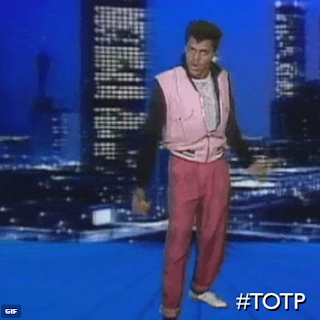 Who would have guessed that Rockwell was in fact a 1000 foot giant?

Hot Chocolate – “I Gave You My Heart (Didn’t I?)” (28)
As confirmed by Mike Read, this was Hot Chocolate's 30th chart hit, and it was also to be their last, not counting later re-releases and re-mixes. It peaked at number 13.

Rockwell – “Somebody’s Watching Me” (7) (video)
A little too early for Halloween, and helped out in the chorus by Michael (and Jermaine) Jackson, this was Rockwell's only hit and it peaked at number 6.

Kool & The Gang – “Joanna” (10) (video)
Kool seems to have a thing for older women here! Joanna reached her peak at number 2 and was the band's biggest hit.

Nik Kershaw – “Wouldn’t It Be Good” (9)
A mix of studio performance and video now from Nik and Wouldn't It Be Good went up to number four.

Carmel – “More More More” (35)
With her second and final top 30 hit, More More More (no, not a cover of Andrea True Connection) peaked at number 23.

This was followed by a Jensen and Peel style top ten video show, although Matthew Wilder didn't have a video so we got a clip of his studio performance, and then finally Mike Read left it to Janice Long to announce that Frankie Goes to Hollywood were still at number one! And it was to be their fifth and final week.

Re-Flex – “The Politics Of Dancing” (34) (+ credits)
In the studio to close the show with their one and only hit, which peaked at number 28. 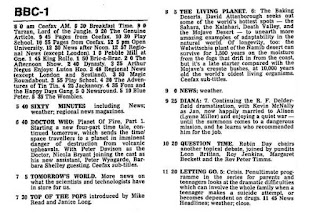