Time for Top of the Pops Action

It looks like tonight's edition, from the 30th August 1979, could be the last for the duration of the BBC Proms season. Since we're about to enter September from 35 years ago, it will at least give 2014 a chance to catch up with 1979! And if the show is to be off the air for a few weeks, what a sensational one to leave us with........ 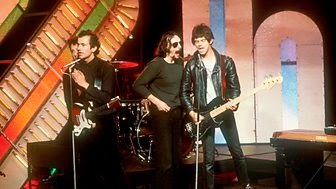 
The Bellamy Brothers ~ over three years since they let their love flow, here they are back in the charts heading towards an even bigger hit.

Secret Affair ~ A debut on the show for the Mod revivalists, and Time for Action was to be their biggest hit.

Dollar ~ a first lead vocal here for Thereza Bazar, and just like the Brotherhood of Man and the Dooleys before them, the switch to a girl lead paid off, Love's Gotta Hold on Me becoming the duo's first top ten hit. Nice Carpenters-like backing vocals too.

Nick Lowe ~ I guess this in a way was the follow up to Girl's Talk, it's the same band, Rockpile, and here they all are in the studio, Dave Edmunds happy to take the roll of rhythm guitarist whilst Nick sings.

Sister Sledge ~ a perfect song for a Legs routine, this time the girls do their thing trapped inside various cages.

The Gibson Brothers ~ a repeat showing for Ooh What a Life, now at its peak position.

Gary Numan ~ the week's highest new entry, on it's way of course to number one. Cars sounded amazing in the arcades of Pontins, Morecambe in September 1979 - whilst playing that game where those two cowboys have a shoot out as a wagon pulls away, with the loser floating off to heaven. Anybody else remember that one?

The Commodores ~ also edited from the 7.30 show - this would become the first of two top ten hits for the band in 1979.

The Specials ~ also edited from the 7.30 show ~ now at its peak in the charts.

Johnny Mathis ~ After 21 years of hits, Gone Gone Gone was aptly to be Johnny's final top twenty hit - here he performs live in the studio, with Gill from Legs & Co dancing prettily in the background.

The Stranglers ~ in the studio but making it obvious they were not quite performing live, Duchess was their only top twenty hit in 1979, and they would get there again until 1982.

Cliff Richard ~ had also clocked up 21 years of hits by this point, but unlike Johnny Mathis this would be far from his last - indeed, We Don't Talk Anymore sparked a major revival in his fortunes that would see him carry on having hits for another 21 years!

Boney M ~ play us out this week, and we essentially say goodbye to them ~ it seems like only 2 and a half years ago we were watching their, er, interesting, debut on the show with Daddy Cool.

Once again thanks to Neil B for uploading another edition of Top of the Pops that we would otherwise not get to see in full. This one is hosted by Jimmy Savile so obviously do not click on the link if you are going to be offended.


There's quite a few acts on here that were also on the 9th August show ~ how unlucky especially for The Flying Lizards and Joe Jackson, but we get some good new tunes from Bill Lovelady (sounding like a reggae David Essex), The Planets, and sharing screen time with a Legs routine, the somewhat dubiously named Randy Vanwarmer, plus Cliff ensuring that nobody misses noticing that he's just got to number one. 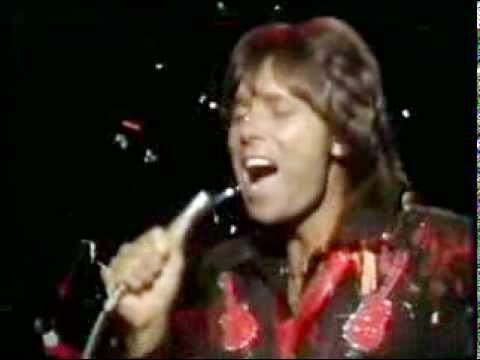 Huge thanks to Neil B for uploading this edition of Top of the Pops from 9th August 1979, hosted by DLT, which will not be repeated on BBC4 next week. This one was never shown on UK Gold so this must have been taped from the original broadcast, perhaps accounting for the missing intro and outro. Thanks also to John G for providing the link:


A show notable for no less than five acts making their debut including The Flying Lizards and Joe Jackson, and also for a rather large and eccentric guitar near the end.
Posted by Angelo at 06:30 35 comments:

We're almost a month ahead now as we reach the 2nd August 1979, and despite a few repeats due to skipping a week there's still plenty of great new songs for Peter Powell to introduce...... 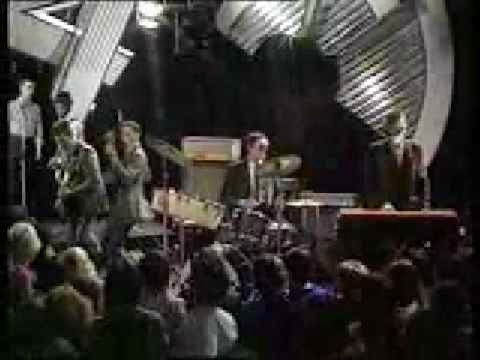 Bringing something a bit special to the show tonight

The Dooleys ~ do the chart run down honours this week with Wanted at its number 3 peak.

Sham 69 ~ a typically rowdy performance here of what would become their biggest but also their final top ten hit.

Olympic Runners ~ here's a band we've seen on the show a number of times now during the past couple of years without them ever breaking into the top 30, and despite the presence of a 'bitch' on stage to help out this one fared no better.

The Korgis ~ a new performance here of 'the sound of summer' now at its peak in the chart. I can't stop singing this tune now.

Abba ~ the Voulez Vous video again on its way to number 3 in the charts.

BA Robertson ~ something of a hero of mine here ~ he wrote the theme tune to Swap Shop! Here is his Top of the Pops debut with the first of two top ten hits in 1979, indeed Bang Bang was to be (or not to be?) his biggest hit. 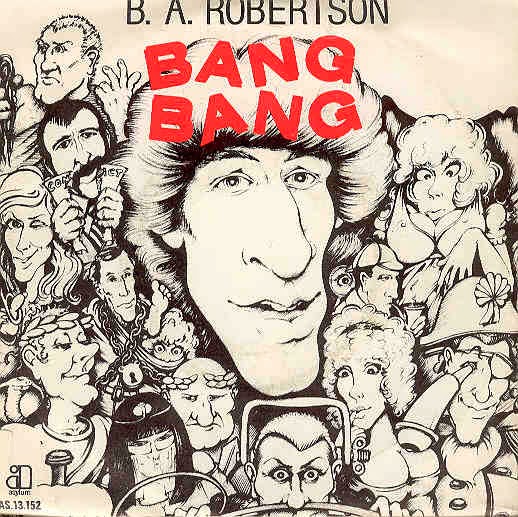 Dave Edmunds ~ ok what's the deal here BBC4 - does somebody not like this one or what? Edited out yet again from the 7.30 broadcast.

Earth Wind and Fire ~ get the Legs & Co routine this week inside a giant sand pit no less.

Sparks ~ back in the studio again for another performance of Beat the Clock ~ no attempt by Ron to sing along this time, but we do get lots and lots of rather nice clocks.

The Special AKA ~ I always thought they were called The Specials at this point, but anyhow this is a major debut, introducing a genre of music that would become a phenomenon over the next year or so. Gangsters was the first of two top ten hits for the band in 1979.

The Gibson Brothers ~ another debut here and very energetically performed too! Ooh What a Life was the first of two top ten hits for the boys from Martinique in 1979.

The Boomtown Rats ~ here they are at number one, now very much liking Thursdays, with a video that was a step up in sophistication from many we have been seeing so far.

Patrick Hernandez ~ brings the credits to life this week, just one place away from his peak of number 10.


So surely next week must be a Sky at Night break, and we've hit a problem really regarding August: the 9th is hosted by DLT, there was no show for the 16th due to a strike, and the 23rd is hosted by Jimmy Savile. That just leaves the 30th August, hosted by David Jensen, as the only remaining broadcastable show for August 1979. Christmas might come early this year!
Posted by Angelo at 13:24 41 comments:

Ok before you get too excited, the whole edition of the 800th Top of the Pops from 26th July 1979 hasn't as yet materialised anywhere online, if it does I will of course post the link right here. Needless to say, it is of course a Jimmy Savile.

Here's the running order, courtesy as always of Popscene, with the links to as many individual performance clips as I can find on Youtube..............

Edit...... the link for the full show 800th has now arrived, and it's at Vimeo - please bear in mind that Jimmy Savile is the host so don't click if you will be offended:

(was there a chart rundown on this show?)
Yes there was, with the music provided by the Top of the Pops theme, Whole Lotta Love :-)

(39) THE UNDERTONES – Here Comes The Summer

If I had Top of the Pops 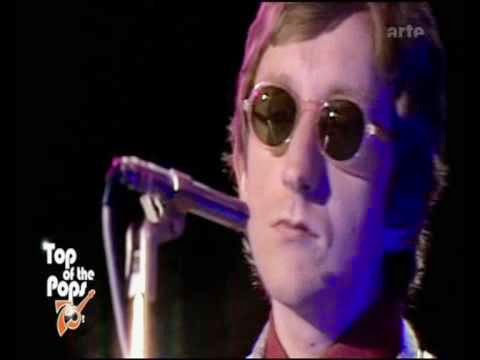 
The Sex Pistols ~ shame we never got to see the video on BBC4, the group's final top ten hit now at its peak of number 3.

The Real Thing ~ with their follow up to Can You Feel the Force, but this one was not quite so powerful and failed to boogie into the top 30.

Dave Edmunds ~ they are really keeping us waiting to see this one - edited out of the 7.30 show.

Donna Summer ~ still no sign of Donna anywhere near the studio, so here's Legs and Co, putting on the red lights by the looks of things, the bad girls. (but why the dog?)

Darts ~ another band about to have their final top ten hit, signing off in regal fashion, though they were just never quite as top class after Den Hegarty left.

UK Subs ~ a new studio performance here, with Stranglehold now at its peak of 26.

The Pretenders - taking a break from their tour to be in the studio, here's a band yet to have their first top ten hit - but it wasn't to be with Kid, which didn't make the top 30. Nice hair though.

The Knack ~ their retro 1960s Beatles look worked wonders for My Sharona, taking it into the top ten in the UK and all the way to number 1 in America.

Sparks ~ they couldn't beat the BBC4 clock tonight with this one as it was edited out of the 7.30 show.

The Boomtown Rats ~ were also edited out - I bet they are not too keen on Thursdays now, never mind Mondays. Maybe being next week's number one will placate them.

The Dooleys ~ a new performance here, still climbing the charts, and this time with a third sister in the background, dressed up like the main two, clearly desperate to be wanted. Did anyone notice, half way through, the next act just warming up on the other stage....

The Korgis ~ shades of Graham Parker here with lead singer height issues, but the song, I felt, stood tall, on its way into the top 20.

Abba ~ the Voulez Vous video with Agnetha wearing a trouser suit that was seemingly even tighter than the one worn by Olivia Newton John in Grease. This was the third of five top 4 singles for Abba in 1979.

Tubeway Army ~ with Are Friends Electric now in its final week at number one, signalling the end of this band's name - all further releases would now be credited to Gary Numan.

Chic ~ (and featuring some very good timesing, David Jensen) play us out this week.

Next week I guess will be a break for the Sky at Night, and then frustratingly it's the 26th July, which happens also to be the 800th edition of Top of the Pops, but guess what, it's a Jimmy Savile. It was shown on UK Gold though, so fingers crossed.....