Do They Know It's Top of the Pops

Time to get your cracker out and give it a good pull, it's a live edition of Top of the Pops from December 20th 1984! 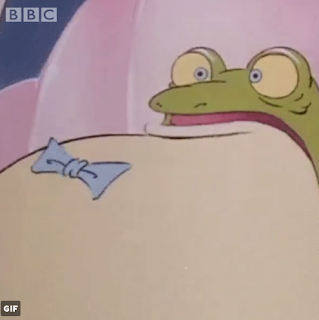 I wish it could be croak-mas every day!

Roy Wood/Wizzard – “I Wish It Could Be Christmas Everyday” (36)
One of many re-entries for what was already a Christmas standard, this year it peaked at number 23.

Paul McCartney & The Frog Chorus – “We All Stand Together” (3) (video)
At its peak, and in its way the end of an era, as Paul would never again get this high up in the charts, not with a proper record anyway.

Bronski Beat – “It Ain’t Necessarily So” (33)
Here they are all wrapped in tinsel and the song peaked at number 16.

Spandau Ballet – “Round & Round” (19) (video)
Went up one more place. But edited out of tonight's early showing.

The Council Collective – “Soul Deep” (37)
It's Paul Weller and gang of course, raising money for the striking miners, and it peaked at number 24.

Foreigner – “I Want To Know What Love Is” (26) (video)
As correctly predicted by Simon, this was a future number one.

Thompson Twins – “Lay Your Hands On Me” (20)
Fresh from playing the keyboards for Foreigner, Tom Bailey also made it to number 13 with this first single from their top five album, Here's To Future Days.

Band Aid – “Do They Know It’s Christmas” (1) (video)
This year's Christmas number one, now in its second of five weeks at the top.

Ray Parker Jr – “Ghostbusters” (15) (audience dancing/credits)
It had peaked at number 2 back in September, now here it was rising up the charts again, this time reaching number 6!

🎼 Before tonight’s #TOTP at 8.30pm, watch Bob Geldof on Saturday SuperStore, with @MikeReadUK, explaining how he wrote Do They Know It’s Christmas in 15 minutes in the back of a taxi. 🚖 pic.twitter.com/qBMZcfOuBu
— BBC Four (@BBCFOUR) November 17, 2017

Bob gets all Christmassy

Another Rock N Roll Top of the Pops

Once again a huge thanks to James2001 for making this edition of Top of the Pops from December 13th 1984, which will not be shown on BBC4 due to an inability to edit out one song by Gary Glitter, available here at WeTransfer. 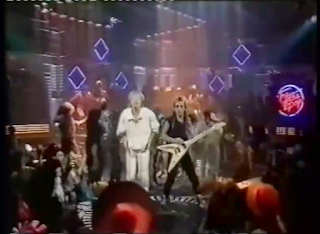 We came, we saw, we conga-ed

Band Aid – “Do They Know It’s Christmas” (1) (video/credits)
First of five weeks at number one for what was at the time, and for a long time after, the biggest selling single ever in the UK.

Lay Your Hands on Top of the Pops

This edition of Top of the Pops from 6th December 1984 will not be shown on BBC4 due to Mike Smith. So a huge thanks this time goes to James2001 for making it available here at WeTransfer 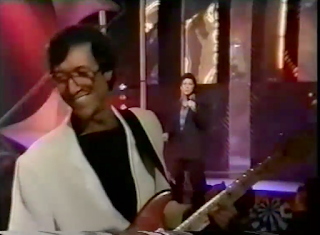 Hank you very much!

Paul McCartney & The Frog Chorus – “We All Stand Together” (9) (video)
His penultimate solo top ten hit, peaked at number 3.

Frankie Goes To Hollywood – “The Power Of Love” (1) (video)
First and only week at number one.

The Kane Gang – “Respect Yourself” (21) (audience dancing/credits)
At its peak.

Top of the Pops Join Hands

Christmas is just around the corner, so get yourself a Feed the World t-shirt, and choo choo choo a train across the floor to the November 29th 1984 edition of Top of the Pops. 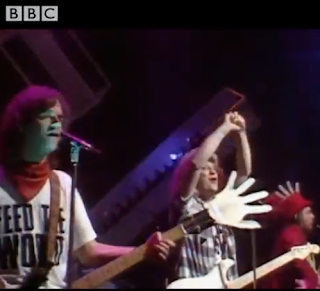 You have to hand it to Slade

Nik Kershaw – “The Riddle” (4)
Nik gets tonight's live edition underway, and The Riddle went up one more place.

Slade – “All Join Hands” (15)
All the scarves come out for this one but unfortunately for Slade they just peaked too early this year!

Tina Turner – “Private Dancer” (31) (video)
She's a strictly come dancer in this video for the title track from her number 2 album, the single peaked at number 26.

Frankie Goes To Hollywood – “The Power Of Love” (3) (video)
With their Christmas card nativity scene video for their third single and soon to be their third number one.

Madonna – “Like A Virgin” (27) (video)
Shame we'll miss seeing her studio performance of this on BBC4 due to them not screening the 13th December edition. Her second top ten hit of 1984, it peaked at number 3.

Alvin Stardust – “I Won’t Run Away” (11)
Alvin's gone for a bit of a pirate look with his Feed the World t-shirt. The song peaked at number 7.

Jim Diamond – “I Should Have Known Better” (1)
It was good to see all of tonight's studio acts supporting Band Aid, and Jim was no exception, clearly enjoying his one week at the top.

Black Lace – “Do The Conga” (26) (+ credits)
Well, Christmas really is just around the corner! And here are the duo themselves in the studio to play us out, but this was their final top ten hit, peaking at a festive number 10.


So, we come to two more editions that BBC4 won't be screening ~ December 6th hosted by Mike Smith, and equally annoyingly, December 13th because for some reason they can't edit out Gary Glitter!
Posted by Angelo at 13:36 27 comments:

One Night in Top of the Pops

It's 7.20pm on November 22nd 1984 and tonight Tommy Vance will be hosting Top of the Pops for one final time. 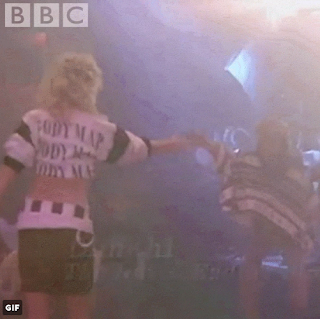 I Fall For You

Nick Heyward – “Warning Sign” (34)
Getting this live edition underway is Nick Heyward performing what would become his final top 30 hit when it reached number 25.

The Human League – “Louise” (26) (video)
It's a busy time for Phil in the charts at the moment, this third and final single from their top three album Hysteria made it to number 13.

Billy Ocean – “Caribbean Queen” (6)
A second bout of dad dancing from Billy but the song was stuck at number 6.

Murray Head – “One Night In Bangkok” (27)
It's always brave and admirable when somebody performs a live vocal in the studio, especially on a live show, though this seemed somewhat shaky in places, and although the verses were live, the chorus was mimed! But this first song from the Tim Rice/Abba boys musical Chess peaked at number 12.

Before his performance on tonight’s #TOTP, watch @NickHeyward on Pop Quiz in 1984 and see if you can beat him to the answer. pic.twitter.com/7Ffd0G3Xos
— BBC Four (@BBCFOUR) November 9, 2017

Top of the Pops Won't Run Away

If you're chasing after the 15th November 1984 edition of Top of the Pops, there's no need to get all out of breath, because it's waiting for you right here! 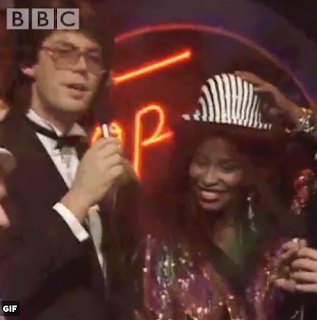 Top hat of the pops!

Matt Bianco – “Half A Minute” (34)
The show gets off to a sophisticated start this week with Matt Bianco's Half a Minute, which peaked at number 23.

Duran Duran – “The Wild Boys” (2) (video)
There's an urban myth that Simon le Bon nearly drowned whilst filming this video! There's dedication for you, but the song couldn't quite make it to the top of the charts.

Slade – “All Join Hands” (38)
Coming in a little too early for Christmas this year, the song peaked at number 15 and was Slade's final top twenty hit. And edited out of tonight's 7.30 showing.

Jim Diamond – “I Should Have Known Better” (3)
But this future number one was edited out.

Alvin Stardust – “I Won’t Run Away” (31)
In the studio showing Billy Ocean how the dad dancing should be done, this was Alvin's seventh and final top ten hit, aptly peaking at number 7.

Nik Kershaw – “The Riddle” (17)
Taken from his top ten album of the same name, The Riddle found its solution at number 3.

Chaka Khan – “I Feel For You” (1) (video + brief interview)
Second of three weeks at the top. And she's even in the studio, though for some reason didn't perform her number one song, not even for showing next week. 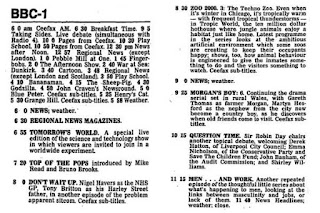 Never Ending Top of the Pops

And so 1984 has now overtaken 2017 as we welcome this live edition from November 8th. 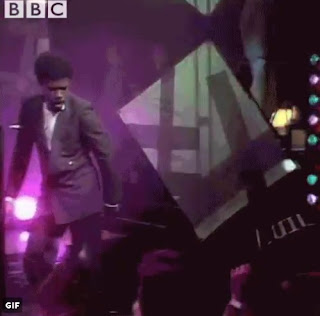 Limahl – “Never Ending Story” (10)
Limahl (and Mandy Newton) get us off to a dreamy start this week, and the song went up to number 4.

Status Quo – “The Wanderer” (7) (video)
Wandering around in the back of a truck here, but the song wandered no higher in the charts.

Billy Ocean – “Caribbean Queen” (9)
We get the first of a mini 1976 invasion now, with Billy showing off his smoothest moves in the studio,and the song went up three more places.

Chicago – “Hard Habit To Break” (21) (video)
And then Chicago with their fifth and final top ten hit, taken from their top 30 album Chicago 17, it peaked at number 8.

Gary Numan – “Berserker” (32)
Gary's suit had more colour than this song, which got no higher in the charts.

Eugene Wilde – “Gotta Get You Home Tonight” (22)
It went up four more places and was Eugene's biggest hit.

Chaka Khan – “I Feel For You” (1) (video)
The first of three weeks at number one for Chaka..Chaka...Chaka Kkan

ZZ Top – “Gimme All Your Lovin’” (11) (audience dancing/credits)
Went up one more place.

Before his performance on tonight’s #TOTP, watch @Limahl_Official reveal his haircare secrets to @MikeReadUK on Saturday Superstore in 1984. pic.twitter.com/LTcaUdPTqc
— BBC Four (@BBCFOUR) November 2, 2017

This Top of the Pops is Mine

This live edition of Top of the Pops from November 1st 1984 will not be shown on BBC4 because of Mike Smith. So a huge thanks goes to Gia for making it available here at WeTransfer 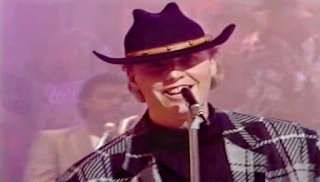 I'm glad this hat's not mine!

Duran Duran – “The Wild Boys” (5)
Following up The Reflex with this atmospheric tune that reached number 2.

Iron Maiden – “Aces High” (32) (video)
The perfect Halloween band made it to number 20 with this effort.

Jim Diamond – “I Should Have Known Better” (40)
His first solo hit after leaving PhD, quite a standout song which made it to number one.

Wham! – “Freedom” (1)
A new performance for their third and final week at number one.