Many thanks once more to Darnall42 for uploading an edition of Top of the Pops to Vimeo, that for obvious reasons will not be shown on BBC4. Jimmy Savile is the host, so clearly don't click the link if you will be offended. 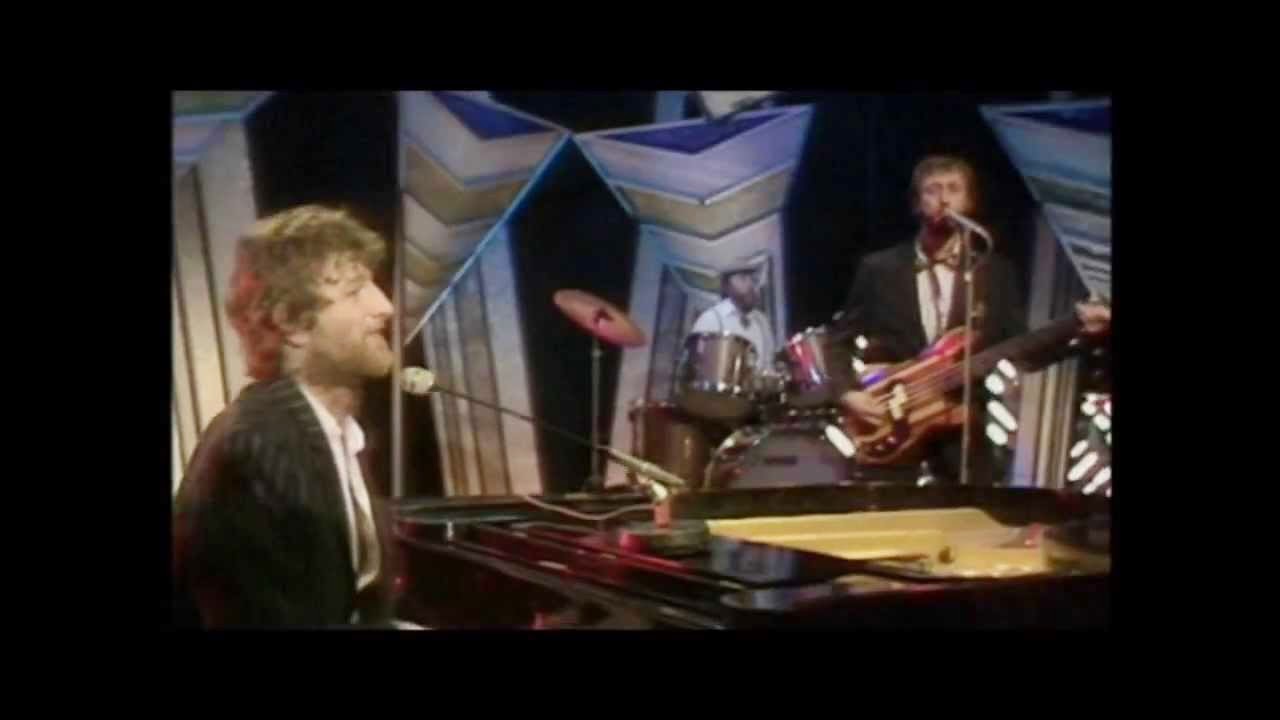 
Paul Burnett always seemed to do such a great job hosting the show, and tonight is no exception, if only he'd got the gig more often, especially in 1979..........

Anita Ward ~ with a perfect song to open the show, and soon to be the next number one.

Quantum Jump ~ sing along now everybody ~ 'Taumata-whaka-tangi-hanga-kuayuwo tamate-aturi-pukaku-piki-maunga horonuku-pokaiawhen-uaka-tana-tahu mataku-atanganu-akawa-miki-tora'  This song originally came in 1976 and the band had split up by the time it eventually became a hit in 1979 - but they did kindly reform for this performance tonight.

Chas & Dave ~ Chas having to do a live vocal here to avoid saying the word 'cowson' which somebody's wife at the BBC thought was a bit rude! Though I'm sure I heard someone sneak it in at least once!

McFadden & Whitehead ~ a wide range of outfits this week for the Legs & Co routine, ranging from wedding dresses to pyjamas - and in front of a clap along audience too.

Sparks ~ a new performance for this one still rising up the charts, but of course filled with lots of disturbing stares into the camera, and even a detached head at one point.

Voyager ~ sounding very much like Mott the Hoople on helium, Halfway Hotel closed down before it made the top 30.

Earth Wind and Fire ~ were edited out of the 7.30 show, but we've seen the video before.

Squeeze ~ why the (probably) best known song from this wonderful band was edited out of the 7.30 show will forever remain one of life's great mysteries, but it will be on again very soon.

Fischer Z ~ pronounced 'fishers head' with a pre-twotone foray into ska here, but The Worker failed to make the top 50.

Hot Chocolate ~ with an interesting song that would maybe have been more at home on The Old Grey Whistle Test, but the group didn't release a top 40 hit in 1979.

Blondie ~ the second of three weeks at number one for Sunday Girl.

Linda Clifford ~ still in the lower reaches of the top 30 (as is Mike Oldfield!) plays us out over the credits.

Top of the Pops is Electric! 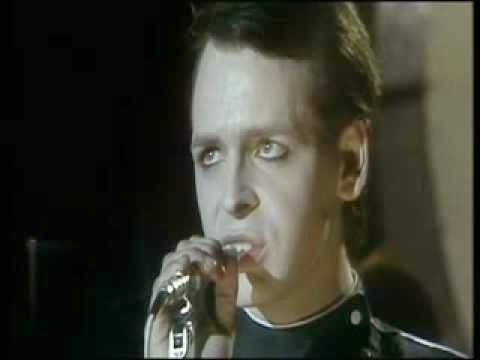 It's cold outside, and the bunnies are not number one any more...

The Skids ~ get the show off to an energetic and very smartly dressed start, with a song that would soon reach number 14.

Roxy Music ~ and 'Dancing the night away' as our host David Jensen introduced it, now at its number 2 peak.

Tubeway Army ~ this week's debut of a major act goes to Gary Numan, still called Tubeway Army at this point (until the next single). 'Are Friends Electric' did indeed sound amazing and futuristic at the time. I remember walking 3 miles from where I used to live in Padiham, all the way to WH Smiths in Burnley town centre, to buy this (for 99p) and then walking the 3 miles back home again to play it! And you tell that to the kids today......

Donna Summer ~ Legs & Co go all Indian for a fiery performance to Hot Stuff - Donna herself not yet having made it into the TOTPs studio.

Liner ~ with a song very much influenced I think by the Bee Gees, but sadly for Liner, Bee Gee style success did not follow, with You and Me failing to make the top 40.

The Damned ~ at their peak with Love Song, but edited out of the 7.30 showing.

Electric Light Orchestra ~ what a bright video this one was, you needed those sunglasses to watch it! Shine a Little Love was the first of four top ten hits in 1979 from their cleverly entitled album, Discovery.

David Bowie ~ was he being a bearded lady in this slightly weird video? Boys Keep Swinging swung all the way to number 7 in the charts.

The Shadows ~ edited out of the 7.30 show, this one was still only at number 21 this week, but it did eventually make it into the top ten.

Elvis Costello ~ sounding very much like Squeeze I thought with Accidents Will Happen ~ and he'd soon go on to be their producer.

Blondie ~ with a clip of the number one song Sunday Girl taken from the Dutch version of Top of the Pops, creatively called Top Pop.

Cheap Trick ~ get to do this week's credits. 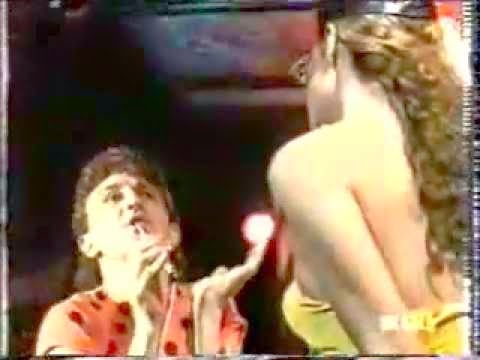 Donna Summer ~ some Hot Stuff plays over the chart rundown.

The Tubes ~ were last seen in the charts (though not on the show) in 1977 with their biggest UK hit White Punks on Dope. Here they are now seemingly going much more mainstream, though Prime Time peaked at 34. Nice Fred Flintstone t-shirt though.

Earth Wind and Fire ~ and not forgetting the Emotions adding to an already heavily populated stage. A fabulous disco era song, adorned with equally fabulous outfits, this was the second of three consecutive top 5 singles for the band.

Blondie ~ Legs & Co slip into their slinkiest Sunday best black dresses for a quite elegant dance routine ~ and was that a key Patti was jangling in the camera at the end?

The Police ~ here's Sting not quite yet getting the hang of this miming lark. Number 12 was as high in the charts as Roxanne got, surprisingly, but the band was on the verge of some most arresting success.

Peaches and Herb ~ Reunited was about to move up one further place in the charts, but they would never have another hit again.

XTC ~ very disappointed that this debut performance was edited from the 7.30 showing - catch it at at 1.40 am tonight if you are an insomniac, or from tomorrow on iPlayer.

M ~ also edited out but we have at least seen this one before - it couldn't dislodge Bright Eyes, number 2 was its peak.

The Undertones ~ with an average age of just 17 Peter informs us, which is quite fitting since Jimmy Jimmy was currently at number 17 in the charts, though it did rather uncooperatively move up one more place.

Abba ~ it's the Snowtime Special performance again, where Benny mistakes his piano stool for a trampoline. This was the second of five top four hits for Abba in 1979.

Judas Priest ~ were also edited out of the 7.30 show. Somebody didn't pay their seven pieces of silver.

Linda Clifford ~ a suggestion from Peter that many thought this couldn't be done - but here's a top 30 disco hit of Simon and Garfunkel's Bridge Over Troubled Water. She does have a great voice and probably could have really belted this one out as it was originally written, but this version troubled the charts no further than number 28.

Max Webster ~ not a person but a group (like Alice Cooper was) came all the way over from Canada to perform a somewhat strange song that each time it promised to take off, instead came to a stuttering halt. And number 43 in the charts is where it finally flopped.

Art Garfunkel ~ for his final week at number one we get to see at last a slightly different 60 seconds clip.

Roxy Music ~ dance away for us over the credits.

The Number One Song in Top of the Pops! 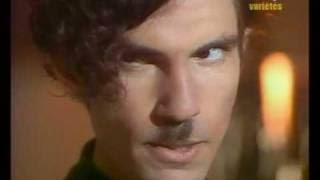 The Bee Gees ~ do the chart rundown music this week, with Love You Inside Out at its number 13 peak.

The Damned ~ had been around for several years by now but Love Song was their first UK hit - and here's a typically energetic performance coupled with Captain Sensible's eye-catching impersonation of Orville the duck.

Elkie Brooks ~ with a song written for her by Gallagher and Lyle, who also join her in the studio as her backing singers, but they couldn't find that song writing magic of 1976 and The Runaway came to a standstill at number 50. There's a 3 year wait now until Elkie's next hit.

The Shadows ~ Mike does his best Cliff impression to introduce the band's 28th 'solo' hit, but Theme from the Deer Hunter is their last top tenner to date.

Boney M ~ chopped from the 7.30 showing, but we have seen this one very recently.

Eruption ~ we've also seen this one very recently too, almost at its number 9 peak now, One Way Ticket was their second and final hit.

Roxy Music ~ with the first showing of a song that's become quite a classic and Bryan Ferry, last seen solo and with heavy duty stubble, now back to his smoothest. And so many clips from Snowtime Special on the show at the moment.

Amii Stewart ~ by skipping the 3rd May edition we're seeing lots of songs we heard only last week, but this time we get a high kicking black lacey Legs & Co routine to Knock on Wood.

Gary Moore ~ trying to out-hank Hank Marvin its the much loved Parisienne Walkways ~ credited as a Gary Moore hit but all the Thin Lizzie gang are here to help out with this evocative tune.

Sparks ~ after a 4 year gap the unique Russel and Ron Mael return with a real eye-catcher ~ and those facial expressions, both funny and scary in equal measure, would not look out of place in that current trailer for Eastenders.

Art Garfunkel ~ you'd think they could show a different 60 seconds of the biggest hit of the year ~ one more chance next week.

David Bowie ~ plays over the credits, but we get to see the video in a couple of weeks time.