Something's Cookin' in the Top of the Pops Kitchen

Whilst the nuclear power plant on Three Mile Island was busy melting down, and Jim Callaghan was losing his vote of no confidence in Parliament, ITV was showing:

(with thanks as always to @TV30YearsAgo) 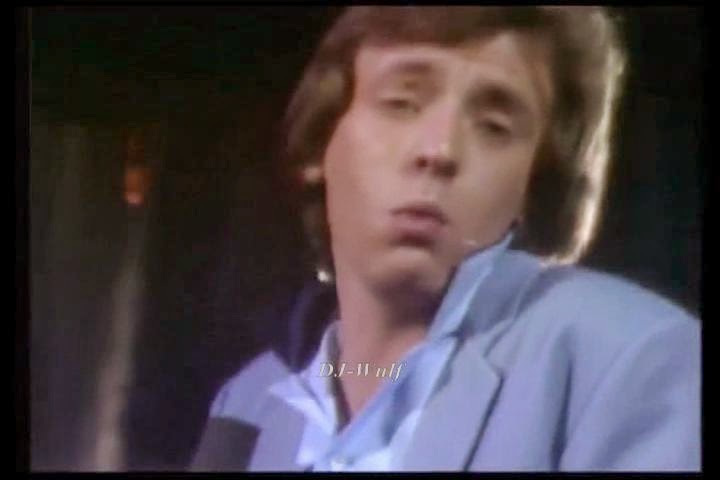 Chic ~ provide the chart rundown song this week, still on its way up the charts.

Racey ~ 'Why do they always get to dance with Legs & Co' notices our host Mike Read as Racey are joined on stage by no less than four of them for this Nicky Chinn/Mike Chapman smash, Some Girls.

The Three Degrees ~ sounding very Donna Summer, perhaps not too surprisingly as this was produced by Giorgio Moroder.

Rocky Sharpe and the Replays ~ Darts lite return but this time with not such a big hit, their cover of Imagination only made it to 39 in the charts.

Neil Diamond ~ Legs & Co are all hidden beneath huge Liberace cloaks at first but then throw them off to reveal an assortment of blue denim outfits.

Gonzalez ~ this catchy number was cut from the 7.30 show, but fear not, it hasn't stopped climbing up the charts yet.

Dana ~ this one didn't quite have all the ingredients to be a top 40 hit, peaking at number 44.

Showaddywaddy ~ the double take boys are back but their best days were behind them now, Remember Then reached number 17. It was a cover of a 1962 song by The Earls.

Sister Sledge ~ another classic disco tune from Chic's Nile Rodgers and Bernard Edwards, who also played on and produced this record.

Kandidate ~ featuring Phil Fearon on guitar, I Don't Want to Lose You finished up being found at number 11.

Black Lace ~ a very short clip of the UKs 1979 Eurovision entry before they flew over to Israel to land 7th place.

Gloria Gaynor ~ this is her penultimate week at number 1.

The Jacksons ~ shake our bodies down over the credits this week, with no rival Mick Jackson anywhere in sight.

Next week it's the 5th April 1979 with Tony Blackburn hosting for what I think is his one and only time this year.

Thanks once again to Darnall42 for supplying another skipped edition of Top of the Pops ~ this time the DLT hosted show from 22nd March 1979, and looking at the line-up (courtesy as always of Popscene) it looks like quite a good one!


The stand-out performance for me was Squeeze doing a live (lead vocal at least) version of Cool for Cats - very energetic.
And were the four Kate Bushes in the Top of the Pops studio or was that a video? Certainly didn't see any audience and it wasn't a live vocal. Not complaining though.
Also enjoyable was the Village People's performance ~ looked like it was from some (American?) tv show.
The Buzzcocks looked very smart this time in their sparkly dinner jackets, and Sham 69 looked like they had judo practice to go to straight after the show.

(Not the best of nights if you weren't so keen on ice-skating) but all we want to watch is: 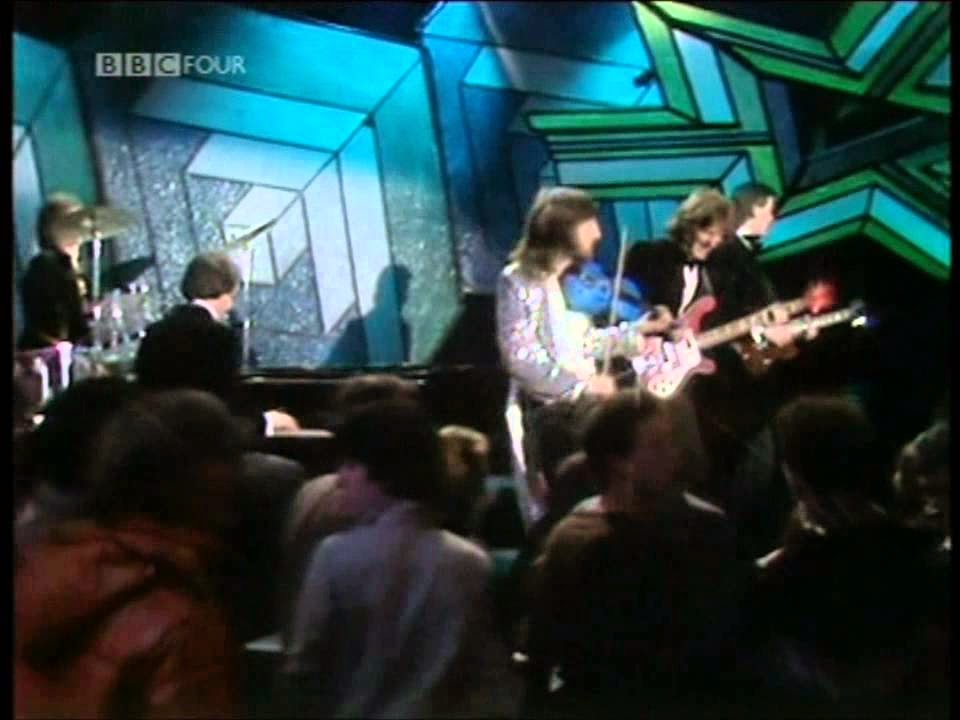 The Players Association ~ turn the music up over the credits on this week's show, presented by the (slightly calmed down a bit compared to what he was like back in 1977) Peter Powell.

The Jam ~ with what sounded a bit like a prototype Going Underground - they were still waiting for that elusive breakthrough top ten hit - it was not to be with Strange Town though, which peaked at 15.

Lene Lovich ~ A new in the studio performance from Lene this week. This would have been a brilliant sight to behold around Halloween time, with all the green witchy effects going on!

Toto ~ with the first of their 4 UK top 40 hits. Three members of this line-up went on to play on Michael Jackson's Thriller LP.

The Cars ~ Featuring former Modern Lovers drummer David Robinson on, er, drums, this was the second of The Cars' four UK top 40 hits.

Chic ~ with a song almost tailor made for a Legs & Co wedding dress disco routine. In the 1980's Chic guitarist Nile Rogers would go on to produce huge hits for the likes of Madonna, David Bowie and Duran Duran.

Thin Lizzie ~ were edited out of the 7.30 show but we have previously seen the performance.

Violinski ~ featuring ELO's Mik Kaminski on violin, ex ELO bassist Mike de Albuquerque and nothing to do with ELO as far as a I know keyboardist John Marcangelo, who also wrote this catchy little tune. Apparently, Terry Wogan seriously considered covering this as a follow up to Floral Dance, but no one could come up with any lyrics!

The Skids ~ edited out of the 7.30 show, but again a previously aired performance.

Herbie Hancock ~ the vocoder King does his thing on another top 20 hit.

Black Lace ~ here's the reason why the show was on a Friday last week, it's the Smokie soundalike/lookalike Song for Europe winners. This was no Save Your Kisses for Me though, and came 7th in Eurovision. A few years later they recorded a tune that probably would have won it......

Gloria Gayner ~ the Bee Gees couldn't survive at number one any longer, as Gloria skated past them to the top spot this week.


Next week we sadly have to skip an excellent looking show hosted by DLT, featuring Squeeze and Kate Bush in the studio, and instead move onto the 29th March edition hosted by Mike Read.
Posted by Angelo at 14:11 29 comments:

Top of the Pops 1979 is Something Else

This edition of Top of the Pops was moved from its regular Thursday slot to Friday, to make way for  A Song for Europe, where the UKs Eurovision song contest song was chosen, and this year the winners were.......... Black Lace! And they will be on the very next show.

Meanwhile, on the front cover of Smash Hits this week...... 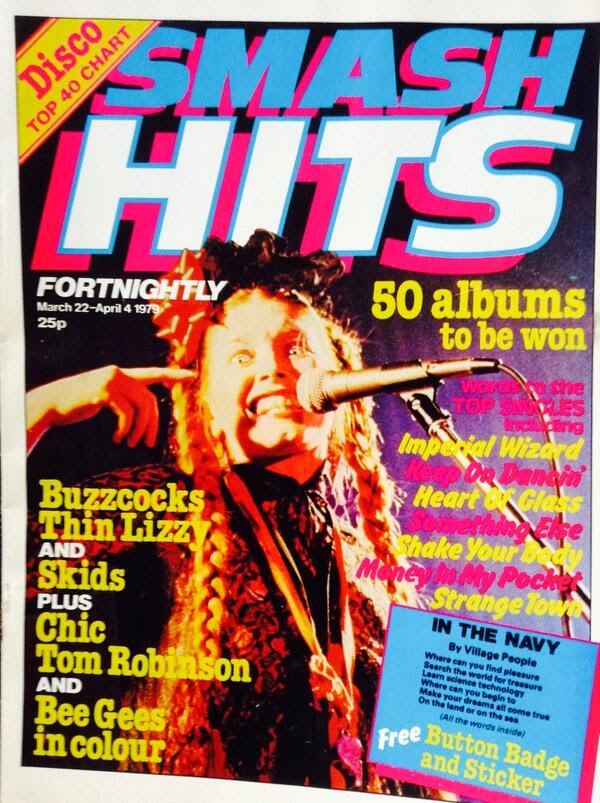 And so on Top of the Pops we had:


Herbie Hancock ~ plays over the credits this week with another top 20 hit for him to follow up last year's I Thought it Was You.

Inner Circle ~ Everything wasn't so great for this one, it peaked at 37. Then they had to wait 13 long years for their next chart hit - Sweat, which did much better making it to number 3.

The Sex Pistols ~ Something Else was the radio friendly song of this double A side, but everyone was really buying it for the not so radio friendly track on the other side. I remember the kids at my school in some kind of frenzy over Friggin in the Riggin, and then hearing it for the first time at a friend's house, once his parents were safely out of earshot in the kitchen! And as for this unmissable multi-coloured punk routine from Legs and Co, well it truly was.......... something else!

Buzzcocks ~ all clad in leather jackets this time and it looks like singer Pete Shelley had let his hair grow a bit too - this catchy number just scraped into the top 30 at 29.

Dennis Brown ~ reggae was getting to be a very popular flavour now in the UK charts - this tune made it to number 14 though it was to be Dennis's only top 40 hit.

Late Show ~ never seen this act before - first impression is a manic mix of Racey and Rocky Sharpe. The song refers to Bristol in Philadelphia, rather than Somerset, and it peaked at 40.

The Real Thing ~ made a much better job of getting the Top of the Pops audience excited than did the previous act - and no wonder with a song as good as this, which went on to reach number 5 in the charts.
Cliff Richard ~ got the red light and was edited out of the 7.30 show. This song got quite a lot of airplay at the time but flopped at number 57 ~ however his next single would become one of the smashes of the year.......

Motorhead ~ a bit of editing out overkill going on here now......

Gene Chandler ~ also got downed from 7.30 - but you can still see all these performances in the unedited screening at 12.30 tonight on BBC4 - the channel that lived.

Leyton Buzzards ~ won The Sun/Radio 1 competition (?) but this song was a number 53 flop. However, singer Geoff Deane & bass player David Jaymes had huge success in the early 1980's with a very different sound as members of salsa sensations Modern Romance.

The Bee Gees ~ at number one for the second and final week, though Kid Jensen seems to think it's been much longer than that, and they still can't make it into the studio or send a video, so we get to see Legs and Co clowning about again ~ did Patti look a wee bit wobbly on that chair? :-)

Gary's Gang ~ play us out over the credits.

Next week, it's our monthly Sky at Night treat, so Top of the Pops returns in two week's time with the edition from 15th March 1979 presented by Peter Powell.