There's No One Quite Like Top of the Pops

December 1980 arrives all too soon with this getting ready for the festive season edition from the 4th hosted by Peter Powell. 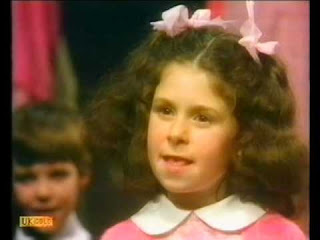 (9) EDDY GRANT – Do You Feel My Love? ®
Eddy's first solo top tenner would go up one place higher in the charts.
Then its tonight's first special guests, Maurice and Verdine from Earth Wind and Fire, to tell us they will be touring the UK in August of 1981!

(27) NEIL DIAMOND – Love On The Rocks (video)
From his hugely successful top ten Jazz Singer album, this single peaked at 17.
Edited out of the 7.30 show this week.

(15) JONA LEWIE – Stop The Cavalry
The follow-up to In the Kitchen at Parties became an almost instant Xmas classic. Peter asks us to look out for well known faces in Jona's band ~ did you spot any?

(22) KENNY ROGERS – Lady
There's no expense spared this week as Legs & Co go Game of Thrones for this week's dance routine. Written and produced by Lionel Richie, Lady peaked at 12.

(16) ST. WINIFRED’S SCHOOL CHOIR – There’s No-One Quite Like Grandma
Clive Dunn had got to number one with Grandad ten years earlier, so the only surprise is what took so long for someone to do the same with Grandma!
Before the next act we get our second special guest, Mike Oldfield, lamenting about his new single which wasn't in the charts.

(3) THE BOOMTOWN RATS – Banana Republic
A typically excitable studio performance from Bob and the boys with Bananana Repuberlic at its peak in the charts now.

(1) ABBA – Super Trouper (video)
Second of three weeks at the top for Agnetha's armpits and Abba's final number one.

Looking for Top of the Pops

It's November 27th 1980 and Tommy Vance, who seems to be having issues locating the camera, is our Top of the Pops host tonight, introducing the show with a (very) little help from audience member Ann-Marie. 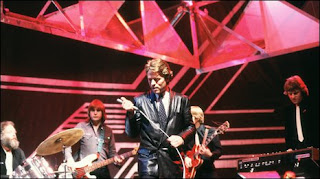 Just make sure you don't come in late with that xylophone at the end......

(50) SHOWADDYWADDY – Blue Moon
The by now somewhat out of place looking teddy boys get the show(addywaddy) underway with a cover of Blue Moon which peaked at 32.

(10) UB40 – Dream A Lie (video)
Now here's a video...... a black and white minstrel show parody makes for an eye catching presentation of this flip double A side of The Earth Dies Screaming, but nevertheless it got no higher than 10.
Then along come the first of tonight's special guests, Hall & Oats, doing their best to look as gloomy as Robert Palmer had managed to be a couple of weeks earlier....

(42) ROBERT PALMER – Looking For Clues
But it seemed to work for him because here he was now performing his song on the show, but it wouldn't quite make the top 30.
ELO drummer Bev Bevan then becomes the second special guest of the night, and he introduces Legs & Co....

(26) ELECTRIC LIGHT ORCHESTRA – Don’t Walk Away
And here said girls are with a somewhat pedestrian routine to the fifth and final single from Xanadu, which peaked at 21.

(49) THE STRAY CATS – Runaway Boys
Tommy Vance predicts success for this new band who'd moved to London from New York, and sure enough this single, produced by Dave Edmunds, was heading for the top ten.
Then its Top of the Pops tongue twister time when Marty and Martha from the Motels become the third special guests of the show. But they are far too pleased to be here to have any chance of a hit.

(12) MADNESS – Embarrassment (video)
Soon to become the band's fourth top ten hit of 1980 when it reached number 4, what a year this had been for Madness.

(8) JOHN LENNON – (Just Like) Starting Over (still picture)
Now at its initial peak, his first top ten hit for five years, and his first with new material for eight.

(6) BARBRA STREISAND – Woman In Love (video)
Falling down the charts.

(5) DAVID BOWIE – Fashion (video)
Stuck at number five, and got no higher.

(4) STEPHANIE MILLS – Never Knew Love Like This Before (video)
Didn't turn up in the studio after all, and now at its peak.

(2) BLONDIE – The Tide Is High (video)
Down from number one.

(1) ABBA – Super Trouper (video)
Tommy tells us that this is Abba's 9th chart topper, maybe he somehow knew that it would also be their last. He also thinks it has a good chance of being the Xmas number one..... Meanwhile, Agnetha really wants to show us her su-per-per arm per-pits.

(20) YOUNG & COMPANY – I Like (What You’re Doing To Me) (crowd dancing) (and credits)
Another song at its peak as Tommy and the special guests wave good night.

Next week we enter the final month of the year with the edition from December 4th 1980.
Posted by Angelo at 13:21 90 comments:

Do You Feel My Top of the Pops?

Here's the edition of Top of the Pops, hosted by DLT, so it won't be shown on BBC4, from November 20th 1980 with many thanks to manorak for uploading this to the excellent Vimeo site. 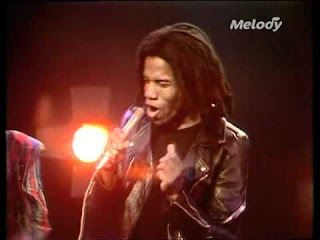 I wish I could do the splits like Rod...

(15) MOTÖRHEAD – Ace Of Spades
Getting the show off to the loudest start possible is Motorhead, but Ace of Spades got no higher than 15 in the charts.

(23) THE BOOMTOWN RATS – Banana Republic (video)
DLT suggested that this single looked for a while like it wouldn't make the top 30, but now it was in there it was heading for the top 3, although it would prove to be their last top ten or even top 20 hit. But another fine video from the Rats.

(30) EDDY GRANT – Do You Feel My Love?
Over a year after Living on the Front Line, Eddy returns to the charts with what would become his first solo top ten hit when it made number 8.

(22) ROD STEWART – Passion (video)
Wow if Rod did the splits any further he'd do himself an injury I'm sure! This one peaked at 17.

(4) DENNIS WATERMAN with THE DENNIS WATERMAN BAND – I Could Be So Good For You ®
Unlucky Dennis keeps popping up on yewtreed editions and this single was now almost at its number 3 peak.

(1) BLONDIE – The Tide Is High (video)
The second and final week at the top for Blondie, their third number one of 1980.

To Cut a Long Top of the Pops Short

We leap forward in time again a little this week to November 13th 1980 with Simon Bates hosting what proves to be a quite fabulous edition.... 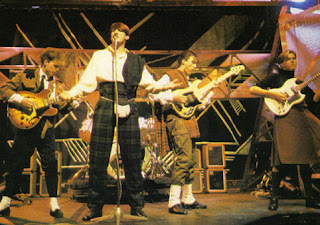 We hereby give permission for the 80's to officially begin....

(35) IRON MAIDEN – Women In Uniform
Getting the show off to a rousing live start is Iron Maiden featuring pre-Bruce Dickinson lead singer Paul Di'Anno. It got no higher than 35.

(6) DAVID BOWIE – Fashion (video)
Continuing to raise the video stakes here following on from the ground breaking Ashes to Ashes. Fashion peaked at number 5. Then along come Ray and Dennis from Dr Hook as the first of tonight's special guests plugging their latest album.

(33) GLADYS KNIGHT & THE PIPS – Bourgie Bourgie
This live studio performance helped the song up just one place higher in the charts. Then the second of tonight's special guests turns up in the form of Stu Francis, to tell us that Crackerjack now has 8 million viewers! I could crush a grape!

(20) JOHN LENNON – (Just Like) Starting Over (danced to by Legs & Co)
When these Top of the Pops reruns began we had narrowly missed out on John Lennon's last hit before he announced his 'retirement' but five years later he returned with this wonderfully apt single. It would peak at number 8 in early December, begin its fall down the charts and then suddenly go to number one in the saddest of circumstances imaginable.

(43) SPANDAU BALLET – To Cut A Long Story Short
I know we've had OMD and Adam & the Ants already, but for me this is where the 80's truly begin ~ the look, the sound and the soon to follow epic videos.

(13) ABBA – Super Trouper (video)
No one would have believed at the time that this fabulous song would be Abba's final number one hit ~ indeed less than 18 months later they would be struggling to even get into the top 30.

(1) BLONDIE – The Tide Is High (video)
At the dawn of the era of amazing videos, Blondie come up with something that looks like it was thrown together in five minutes. Still, a great song and the first of two weeks at number one.


The next edition should be November 20th but it is hosted by DLT so it will be skipped in favour of the 27th. However, next week is a Sky at Night Week so we'll have to wait until the 19th of November to see it.

I Could be so Top of the Pops for You

Our thanks goes here to Robert Thompson for uploading the November 6th edition of Top of the Pops, which won't of course be broadcast on BBC4 due to it being hosted by Jimmy Savile. I've found the best way to access the file is via the 4Shared app for phones, it works without any bother at all on there. 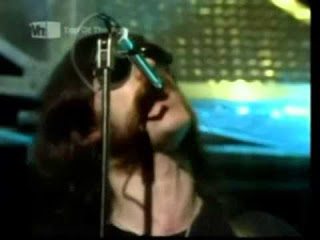 Or use this alternative link thanks to Neil B:
http://www.4shared.com/video/XKqERb_cba/TOTP_061180.html

(33) KOOL & THE GANG – Celebration
A studio appearance for this classic song soon to become their second top ten hit when it made number 7.

(2) STATUS QUO – What You’re Proposing ®
Now at its peak position.

(19) DENNIS WATERMAN with THE DENNIS WATERMAN BAND – I Could Be So Good For You
A fine live vocal from Dennis here with the theme tune from Minder which became his only top ten hit reaching number 3. Then comes a guest appearance from a somewhat unenthusiastic Robert Palmer giving away his latest record to a very polite girl.

(18) STEPHANIE MILLS – Never Knew Love Like This Before (video)
Making its way up the charts towards number 4.

(NEW) NEIL DIAMOND – Love On The Rocks (video)
A taster from his movie The Jazz Singer, this became Neil's final top 20 hit.

(29) ROXY MUSIC – The Same Old Scene
A very sparkly dressed Legs & Co do Bryan and the boys proud here with their routine.

(25) UB40 – The Earth Dies Screaming
Another 1980 nuclear bomb song which gave UB40 their third top ten hit of the year.

(21) MOTÖRHEAD – Ace Of Spades
Perhaps their best known tune, though surprisingly it only made it to number 15.

(1) BARBRA STREISAND – Woman In Love (video)
The final week at number one for Barbra.

(30) JOHN LENNON – (Just Like) Starting Over (crowd dancing) (and credits)
Oh boy, it's that time already. But we'll have to wait a little longer to hear this one as its missing from the end of this recording.
Posted by Angelo at 01:49 32 comments: