Top of the Pops Arrest 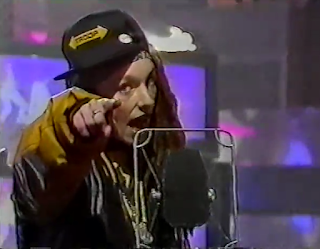 Krush – “House Arrest” (20)
Became their only top ten hit when it peaked at number 3.

Climie Fisher – “Rise To The Occasion” (31)
Became the duo's first of two top ten hits when it peaked at number 10.

Belinda Carlisle – “Heaven Is A Place On Earth” (5) (video)
Will be number one in two weeks time.

Morris Minor & The Majors – “Stutter Rap (No Sleep Til Bedtime)” (23)
About to become a bigger hit than the Beastie Boys ever had when it peaked at number 4.

Turn Back Top of the Pops

This edition of Top of the Pops from Christmas Day 1987 will not be shown on BBC4 due to the Mike Smith contract dispute. I'm still away from home but hopefully some kind person will post a link to the show in the comments for everyone :-) 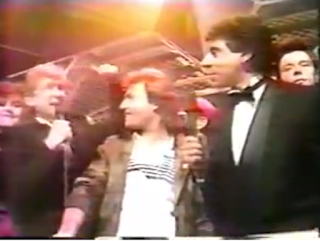 Top of the Pops Around the Christmas Tree

I'm still away from home, so this blog for the 17th December 1987 edition of Top of the Pops is being compiled before I have had a chance to watch. 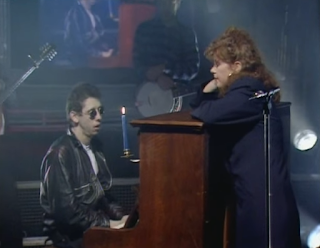 The Pogues & Kirsty MacColl – “Fairytale Of New York” (8)
Arguably the best ever Christmas record, but it couldn't quite get to number one.

Belinda Carlisle – “Heaven Is A Place On Earth” (19) (US TOTP clip)
Her first solo single and in the new year it will become her only number one hit.

Top of the Pops On My Mind

This edition of Top of the Pops from 10th Decmber 1987 will not be shown on BBC4 due to the Mike Smith contract dispute. But it can be streamed here at YouTube. 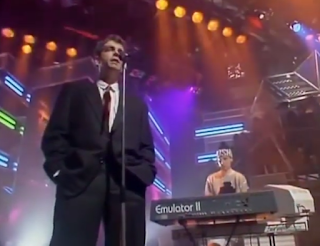 The Pet Shop Boys are in the building

Pet Shop Boys – “Always On My Mind” (4)
Will be the Christmas number one.

Michael Jackson – “The Way You Make Me Feel” (3) (video)
At its peak. And another bullet dodged by BBC4!

Rick Astley – “When I Fall In Love” (2)
Just missed out on the top spot, despite the harp.

Jellybean featuring Elisa Fiorillo – “Who Found Who” (11) (video/credits)
Went up one more place.

Once Upon A Top of the Pops

Once upon a time, long, long ago, on the 3rd of December 1987, there was an edition of Top of the Pops. Many people fell in love with it at the time, but afterwards it lay forgotten on a long lost shelf gathering dust, until 32 years later when it was shown once again, to live happily ever after! 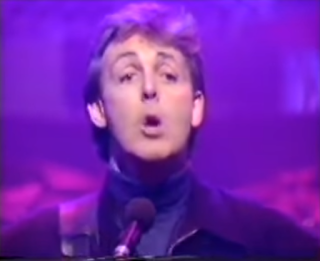 The Proclaimers – “Letter From America” (3)
A second studio performance but the song went up no higher.

Def Leppard – “Hysteria” (26) (breaker)
Another song already at its peak.

Jellybean featuring Elisa Fiorillo – “Who Found Who” (18) (breaker)
Became Jellybean's only top ten hit when it peaked at number 10.

Michael Jackson – “The Way You Make Me Feel” (16) (breaker)
This third single from his number one album Bad peaked at number 3.

Paul McCartney – “Once Upon A Long Ago” (14)
Performing in the studio for the first time since 1974, this became Macca's final solo top ten hit when it peaked at number 10.

I Want To Be Your Top of the Pops

I'm going to be away from home for the next week, so the next few blogs will have to be written before I get a chance to watch the shows, starting with this edition from 26th November 1987. 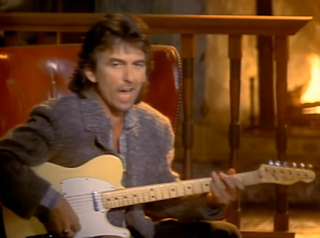 Blue Mercedes – “I Want To Be Your Property” (24)
Their only top 40 hit and it went up just one more place.

The Communards – “Never Can Say Goodbye” (4)
In the studio again but the song was now at its peak.

Shakin’ Stevens – “What Do You Want To Make Those Eyes At Me For?” (27)
Became Shaky's 15th and final top ten hit when it peaked at number 5.

Paul McCartney – “Once Upon A Long Ago” (23) (breaker)
Became his final solo top ten hit when it peaked at number 10.

George Harrison – “Got My Mind Set On You” (2) (video/credits)
Third of four weeks at number 2 for George. It's a shame he didn't make it into the studio to perform it.

Dinner With Top of the Pops

Yum, yum! On the menu is a delicious treat for your tastebuds with a feast of hits on tonight's 19th November 1987 edition of Top of the Pops! 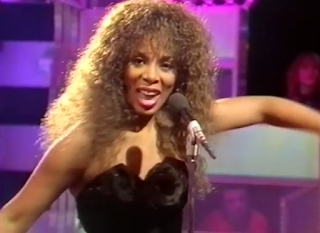 Top of the Hot Stuff

Maxi Priest – “Some Guys Have All The Luck” (18)
Tonight's starter is a live vocal with a song that had already been a top 20 hit for both Robert Palmer and Rod Stewart, but Maxi's version was the biggest hit of the three peaking at number 12.

The Proclaimers – “Letter From America” (25)
The main course begins with Charlie and Craig making their debut on the show to perform what would be their first of three top ten hits - it wasn't to be the Christmas number one but it did make it to number 3. But the big question of the night is - was it a sock?

Barry White – “Sho’ You Right” (20)
Still hungry? Perfoming in the studio with his first top 40 hit for nine years, it's 'the hippopotamus of love' and the song peaked at number 14.

The Smiths – “I Started Something I Couldn’t Finish” (23) (breaker)
Went up no further.

Donna Summer – “Dinner With Gershwin” (17)
And for a mouthwatering dessert, the legendary queen of disco Finally makes it into the studio, and the song went up one more place.

Whitesnake – “Here I Go Again” (11) (video/credits)
It's a second chart helping for this song and it went up two more places.

My Baby Just Cares For Top of the Pops

My baby don't care for Eastenders or Ever Decreasing Circles, my baby just cares for the 12th November 1987 edition of Top of the Pops! 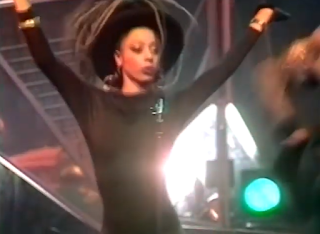 The Communards – “Never Can Say Goodbye” (6)
Getting tonight's show off to a vibrant start and the song went up two more places.

Bill Medley & Jennifer Warnes – “(I’ve Had) The Time Of My Life” (10) (US TOTP clip)
Singing live in the LA studio, this famous song from Dirty Dancing was number one in America, and it peaked at number 6 over here.

Mirage – “Jack Mix IV” (13)
Performing what would soon become their second of two top ten hits when this bouncy medley of new and old hits peaked at number 8.

Alexander O’Neal – “Criticize” (28)
In the studio tonight to perform his biggest hit, becoming his second of two top tenners when it peaked at number 4.

Nina Simone – “My Baby Just Cares For Me” (11) (video/credits)
Another old song propelled into the charts on the back of a tv advert, this became Nina's third of three top ten hits when it peaked at number 5 - which was very apt, because the tv advert was for Channel No.5!

Top of the Pops in Your Hand

This edition of Top of the Pops from November 5th 1987 will not be shown on BBC4 due to the Mike Smith contract dispute, so a huge thanks goes to Robert Thompson for making it available here at WeTransfer. 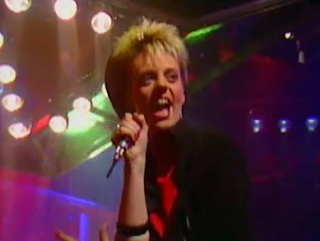 Do you remember remember this song?

T’Pau – “China In Your Hand” (5)
Getting the show underway with a bang, this will be number one next week.

George Harrison – “Got My Mind Set On You” (7) (video)
Rocketing up the charts, from his top ten album Cloud Nine, this narrowly missed out on the top spot, peaking at number 2.

Heartbeat – “Tears From Heaven” (32)
A sparkling performance, but this was their only top 40 hit, and number 32 was its peak.

The Communards – “Never Can Say Goodbye” (15) (breaker)
Became their third and final top ten hit when it peaked at number 4.

Whenever You Need Top of the Pops

When you're all alone and feeling down, I'll bring my 29th October 1987 edition of Top of the Pops to you! 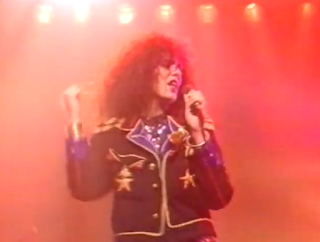 The Style Council – “Wanted” (26)
Getting tonight's show underway with a tune that peaked at number 20.

George Michael – “Faith” (2) (video)
This fabulous title track single from his number one album was now at its peak.

Rick Astley – “Whenever You Need Somebody” (11)
Became his second of eight top ten hits when it peaked at number 3.

Ray Parker Jr – “I Don’t Think That Man Should Sleep Alone” (15)
Mr Ghostbusters is in the studio and his final hit went up two more places.

Eurythmics – “Beethoven (I Love To Listen To)” (25) (breaker)
This odd little tune went up no higher.

George Harrison – “Got My Mind Set On You” (22) (breaker)
His first hit for six years and it peaked at number 2.

The Top of the Pops Dinosaur

It was a night like this thirty two years ago when we watched the 22nd October 1987 edition of Top of the Pops! 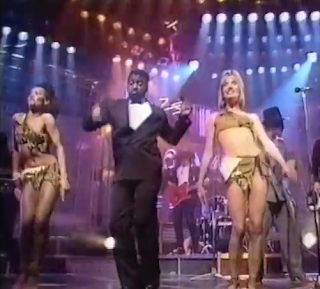 Was (Not Was) – “Walk The Dinosaur” (12)
Getting this monster show off to a roaring start and the song went up two more places.

Los Lobos – “Come On Let’s Go” (21) (US TOTP clip)
Introduced by Nia Peeples and performing live in the LA studio, this song peaked at number 18.

Kiss – “Crazy Crazy Nights” (4) (US TOTP clip)
Also performing completely live in the LA studio, but the song was at its peak.

Erasure – “The Circus” (7)
Andy's concertina has been dumped and replaced with a Salvation Army band, and The Circus went up one more place.

George Michael – “Faith” (10) (breaker)
The title track from his number one album, and it peaked at number 2.

You Win Top of the Pops

Congratulations! All tonight's numbers are on your ticket making you the lucky winner of the 15th October 1987 edition of Top of the Pops! 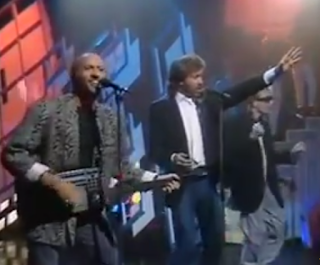 UB40 – “Maybe Tomorrow” (29)
Getting us underway tonight, banjo and all, with a song that peaked at number 14.