Turn it on Again!

So we reach the 13th March 1980 where we are treated to the Top of the Pops studio debut of Genesis and the song that gives this blog its title.... 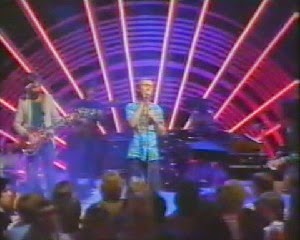 (23) RUSH – Spirit Of Radio (and charts)
The Canadian rockers play over the chart rundown on their way to a first top 20 hit.

(39) THE DOOLEYS – Love Patrol
Not quite able to reach the same heights as they did a year earlier, Love Patrol was their final top 30 hit.

(40) SECRET AFFAIR – My World
Performing in the scaffolding built earlier by Legs & Co, My World became the band's second and final top 20 hit.

(8) THE VAPORS – Turning Japanese
Host Steve Wright of course takes this opportunity to do his most embarrassing Japanese accent to introduce the Vapors, and a song that is not about what many people believe it to be about....

(36) SIOUXSIE & THE BANSHEES – Happy House
One of this week's highlights has to be this darkly ironic song which was to become a top 20 hit for the band.

(18) THE GIBSON BROTHERS – Cuba
Another studio performance of Cuba but no Legs & Co this time.

(35) GENESIS – Turn It On Again
Genesis had been a highly successful albums band in the 1970s but had only had one previous top ten single (Follow You Follow Me in 1978) and this was their flowery shirted debut in the Top of the Pops studio - the first of many in the 80's for Phil Collins and the boys.

(1) FERN KINNEY – Together We Are Beautiful ®
That bit of fairy dust Legs & Co sprinkled over this song the previous week obviously did the trick for Fern Kinney as she replaces Blondie at number one ~ but there's even more magic to come next week from a song not yet even in the charts.....

(7) CAPTAIN & TENILLE – Do That To Me One More Time (and credits)
At their peak in the charts and playing over the credits its Daryl Dragon and Cathryn Antoinette.

Another Nail in my Top of the Pops

Thanks to Neil B for the upload of the 6th March 1980 hosted by DLT, but it doesn't seem so easy to view this file as previous ones ~ if you want to give it a try the link is here

I've not been able to get it to work for me unfortunately, so can't really comment too much on the show other than to say it seems a fairly short edition and some obvious standouts are Squeeze, Martha and the Muffins and the Lambrettas. Anyhow, here's how it lined up (with a few links to youtube clips): 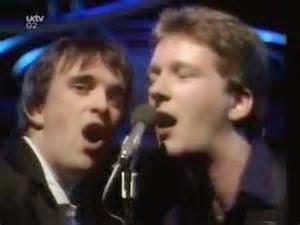 Top of the Pops Yourself Dizzy

So the Lake Placid Winter Olympics are over and Top of the Pops can return to its regular Thursday slot once more, but maybe there is still one final gold medal to hand out..... 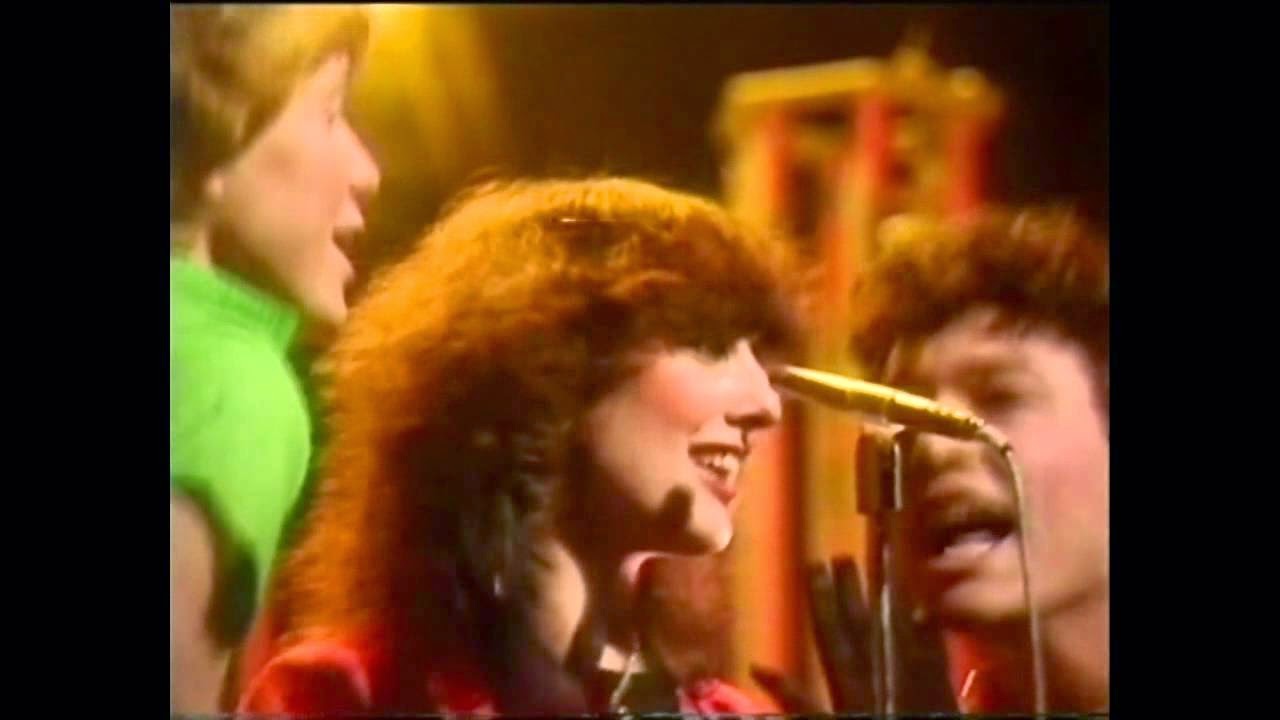 Has he put his clothes back on yet?

(21) JEFFERSON STARSHIP – Jane (and charts)
A second outing on the chart rundown for Jane, now at its chart peak

(5) ELVIS COSTELLO & THE ATTRACTIONS – I Can’t Stand Up For Falling Down
Elvis literally takes off in the studio for the second of his three top ten hits.

(6) MARTI WEBB – Take That Look Off Your Face ®
A repeat showing of Marti's debut performance here ~ I hope they are not going to leave in lots of things we've seen before and edit out stuff we haven't yet seen....

(7) MICHAEL JACKSON – Rock With You (video)
The third of four top ten hits from his album Off the Wall. And edited out of the 7.30 showing.

(47) LIQUID GOLD – Dance Yourself Dizzy
A quick sip of champagne for singer Ellie Hope before performing Liquid Gold's big breakthrough single and first of two top ten hits in 1980. And I think the drummer really wanted to be noticed!

(40) THE GIBSON BROTHERS – Cuba
With a catchy song that just failed to make the top 40 for them a year earlier, but this time, and with a little help from a carnival of Legs & Co, it made the top 20.

(17) PETER GABRIEL – Games Without Frontiers (video)
So is it Kate Bush singing the 'Jeux sans frontieres' part? Well we'll have to wait for the later showing because astonishingly it was edited out of the 7.30 slot.

(28) DAVE EDMUNDS – Singing The Blues ®
A repeat of the Rockpile boys from a couple of weeks back, with Singing the Blues now at its chart peak for them.

(19)  Legs & Co – dance to So Lonely by The Police, a third single from their 1978 debut album Outlandos d'Amour, despite having recently released their second album, Regatta de Blanc.

(22) RAINBOW – All Night Long (video)
The second of Rainbow's three top ten hits. And another one edited out of tonight's 7.30 show.

(12) THE SHADOWS – Riders In The Sky
Hank and the gang smile their way through this cover of the Ramrods top ten 1961 hit, though number 12 was a high as it got for the Shadows, and it was also their final top 30 hit.

(1) BLONDIE – Atomic (video)
Blondie blow Kenny Rogers out the number one spot. Was this the single mix - it seems to have quite an extended instrumental break?

(23) DAVID BOWIE – Alabama Song (and credits)
Bowie plays us out this week with his cover of Alabama Song, made famous by the Doors, at its chart peak.


Next week then should be the 6th March 1980, but here we meet our first obstacle of the year, as this is a DLT edition and it would seem he's still off limits as far as BBC4 goes, so instead we skip to the 13th March hosted by Steve Wright.

DLT hosted six editions in 1980, seven if you include the New Years Day special on January 1st 1981. Jimmy Savile hosted four editions which includes the Christmas Day special.
Posted by Angelo at 13:51 65 comments:

Together we are Top of the Pops

For the second week running we have an edition of Top of the Pops that was originally broadcast on a Friday due to the BBCs coverage of the Winter Olympics. Let's hope that Peter's opening joke isn't the start of a slippery slope..... 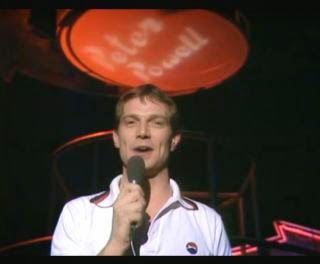 Hello and welcome from Lake Placid...

(30) RAINBOW – All Night Long (and charts)
The follow-up to Since You've Been Gone plays over the chart rundown this week.

(40) SHAKIN’ STEVENS – Hot Dog
Making his debut on the show here an act who went on to an unfathomably successful chart career in the 1980's...... But perhaps equally unfathomably, considering there are three repeat performances tonight, he was edited out of the 7.30 showing!

(3) BLONDIE – Atomic (video)
The third and most successful single from their album Eat to the Beat.

(48) THE BEAT – Hands Off She’s Mine
And talking of the Beat, here they are with their bouncy follow-up to Tears of a Clown.

(18) BUGGLES – The Plastic Age ®
Now getting just as much, if not more, airtime on Top of the Pops than they did with Video Killed the Radio Star.

(23) FERN KINNEY – Together We Are Beautiful
On her way to one hit wonderdom, with the help here of the Top of the Pops orchestra, but she did do better with this song than Steve Allan had done a year earlier, his version only reaching 67 despite his appearance on the show.

(8) THE RAMONES – Baby I Love You ®
A big leap up the charts from last week's number 20 to number 8, but it was all downhill thereafter.

(6) CLIFF RICHARD – Carrie (video)
Cliff certainly had his finger on the musical pulse of the time with this fine Joe Jacksonesque tune.

(46) IRON MAIDEN – Running Free
The debut here of one of the most successful heavy metal groups named after a medieval torture device of all time, but of course it was edited out of the 7.30 showing, despite the repeats of Buggles/Tourists/Ramones.

(1) KENNY ROGERS – Coward Of The County (video)
His second and final week at number one with this "soft and sentimental" song.

(25) PETER GABRIEL – Games Without Frontiers (and credits)
On his way to his first top ten hit.

Off Your Top of the Pops

This edition of Top of the Pops, from the 15th February 1980, was originally broadcast on a Friday evening due to the BBCs coverage of the Winter Olympics from Lake Placid. So which acts will be winning the medals tonight? 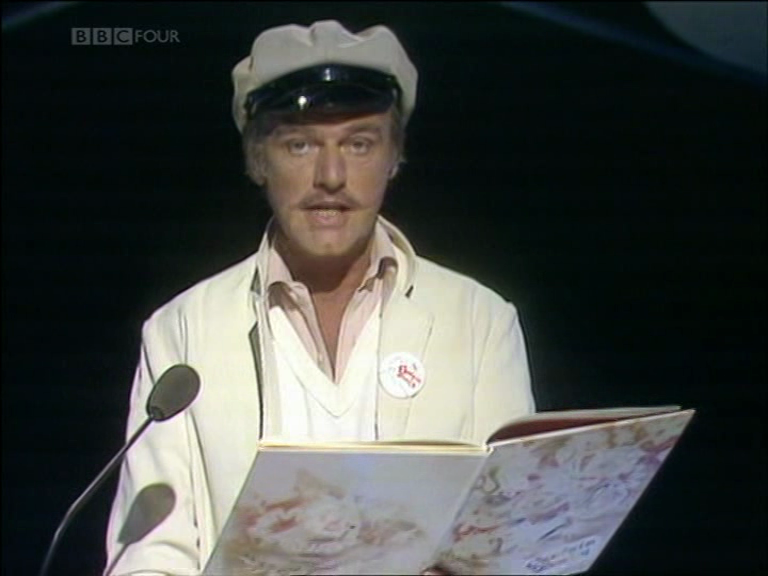 (23) KOOL & THE GANG – Too Hot (and charts)
Get us underway with Too Hot (perfect for the Winter Olympics!) at its peak.

(55) THE FLYING LIZARDS – T.V.
A truly bizarre performance here from the Lizards with their follow-up to Money (which never quite made it onto the BBC4 repeats last year) but sadly it only got to 43 in the charts.

(17) ELVIS COSTELLO & THE ATTRACTIONS – I Can’t Stand Up For Falling Down (video)
The aptly named follow-up to Accidents Will Happen featuring some slightly awkward looking dance moves from Elvis and the boys in their holiday video.

(12)  Legs & Co  – the girls show Elvis how its done as they go ballroom this week to Michael Jackson's Rock With You.

(39) DAVE EDMUNDS – Singing The Blues
1979 had been a very successful year for Dave and the Rockpile guys but this cover of Guy Mitchell's (and Tommy Steele's) 1957 number one Singing the Blues was his only chart single of 1980.

(49) MARTI WEBB – Take That Look Off Your Face
From the latest Lloyd Webber musical, Tell Me on a Sunday, performed live in all its big note glory by Marti here with the Top of the Pops orchestra in clear view.

(1) KENNY ROGERS – Coward Of The County (video)
Grabbing the gold medal from under the noses of the Specials to make it to number one this week.

(20) THE RAMONES – Baby I Love You (and credits)
Play over the credits this week as they head towards the top ten.

Next week it's Peter Powell hosting another Friday edition from the 22nd February 1980.
Posted by Angelo at 12:54 36 comments: