It's the summer of 1984 again, so get your pineapples out ready for a good push while you jump up and down and to your knees for the 16th August edition of Top of the Pops! 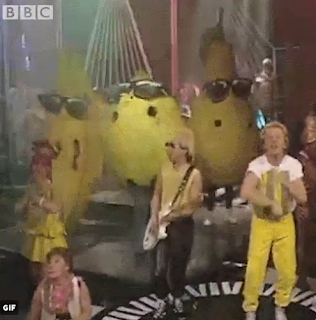 Tears For Fears – “Mothers Talk” (38)
Roland gets his first outing as lead singer with this first single from their number 2 album, Songs From the Big Chair. Mother's Talk peaked at number 14.

Howard Jones – “Like To Get To Know You Well” (10) (video)
Wandering around the streets is Howard getting to know everyone well, and his fourth of six top ten hits peaked at number 4.

Black Lace – “Agadoo” (2)
They've brought their own giant sized fruit with them this week, but not a pineapple in sight! And number 2 was as good as it got.

Iron Maiden – “2 Minutes To Midnight” (27) (video)
Is it Halloween yet? Usual scary sounding song from Iron Maiden and it peaked at number 11.

A Flock Of Seagulls – “The More You Live The More You Love” (29)
A second studio performance for this song which went up three more places.

Trevor Walters – “Stuck On You” (15)
And a second performance from Trevor on his way to number 9.

George Michael – “Careless Whisper” (1) (video)
After nine weeks, a new number one! The first of three weeks at the top for George.

The Pointer Sisters – “I Need You” (34) (audience dancing/credits)
Reached number 25.

The Top of the Pops Before You Came

It's August 9th 1984, and sandwiched between Olympic Grandstand at 6.20pm, and Hi De Hi at 8pm, we have a sweltering edition of Top of the Pops! 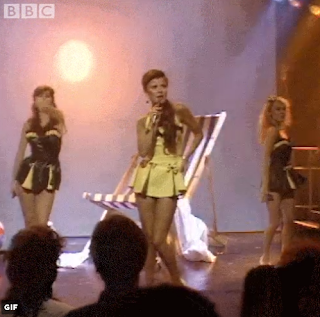 It's hot in the studio tonight!

Tracey Ullman – “Sunglasses” (26)
Well, Tracey and the girls get the show off to a leggy start here, but Sunglasses was to be her final top 40 hit, peaking at number 18.

Hazell Dean – “Whatever I Do (Wherever I Go)” (8)
A terrific follow up to Searchin, and it did even better in the charts, reaching number 4.

Blancmange – “The Day Before You Came” (22)
It just wouldn't go up any higher for them.

Laura Branigan – “Self Control” (13) (video)
Quite a risque video in parts here but it did the trick because Self Control became her biggest hit, peaking at number 5, though it was also her final top 40 hit.

Frankie Goes To Hollywood – “Two Tribes” (1)
Saving their best performance of this Cold Ward soundtrack for their ninth and final week at number one.

Rod Stewart – “Some Guys Have All The Luck” (25) (audience dancing/credits)
Rod took this song up one place better than Robert Palmer's original from two years earlier, when it peaked at number 15.

The Closest Thing to Top of the Pops

Here we are then at August 2nd 1984 already as we begin to get a little closer to synchronizing once again with 2017. 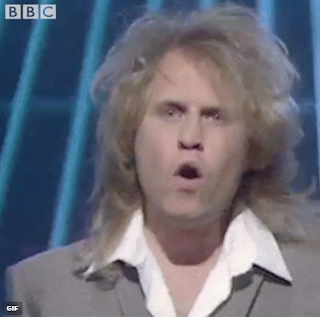 Mike lets his hair down for once

Black Lace – “Agadoo” (19)
Well come on it is a great way to get a show underway! Their second of three top ten hits, Agadoo was their biggest, peaking at number 2.

Prince – “When Doves Cry” (4) (“Purple Rain” clips)
My oh my, some saucy goings on in this video! But number four was it's chart climax.

The Kane Gang – “The Closest Thing To Heaven” (15)
Went up three more places.

A Flock Of Seagulls – “The More You Live The More You Love” (43)
A change of hair style for what became the band's final top 30 hit, making it to number 26.

Trevor Walters – “Stuck On You” (44)
Covering a Lionel Richie song that was still in the top 40 itself, and then beating it in the charts by reaching number 9, though it was his final top 40 hit.

George Michael – “Careless Whisper” (12) (video)
Going solo here with what was in fact the second single from Wham's forthcoming number one album, Make it Big. It was of course to be the song to replace Two Tribes at number one. 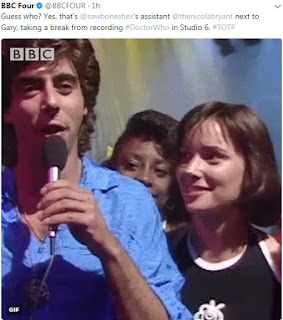 Gary with Peri from Dr Ooooooh!

Hole in my Top of the Pops

This edition of Top of the Pops will not be shown on BBC4 due to one of the hosts being DLT, so a huge thanks once again goes to Neil B for making it available here at WeTransfer 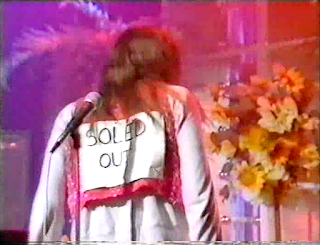 Oh no, the fascist capitalist pigs are making me sing on the telly!

Queen – “It’s A Hard Life” (23) (video)
This throwback Play the Game soundalike made it to number 6.

Frankie Goes To Hollywood – “Two Tribes” (1)
7th of nine weeks at number one!

You Think You're Top of the Pops

It's July 19th, so do your hair up and get your best dress on for another live edition of Top of the Pops that is sure to go with a bang! 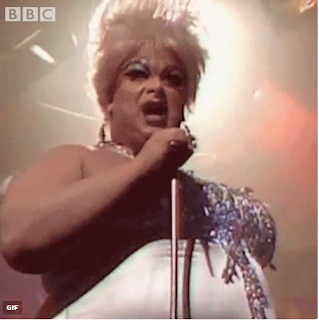 It's good to see Agnetha from Abba making a comeback

The Mighty Wah! – “Come Back” (28)
A big sound to get this live show underway and Come Back rose to a peak of number 20, but it was to be their final hit.

Billy Idol – “Eyes Without A Face” (33)
Entering the Top of the Pops gurning contest here is Billy Idol with his solo breakthrough hit which peaked at number 18.

Frankie Goes To Hollywood – “Two Tribes” (1)
The boys go all gun toting SAS for this week's performance, their sixth week of nine at number one.

Shannon – “Sweet Somebody” (25) (audience dancing/credits)
At its peak.

Top of the Pops at Heart 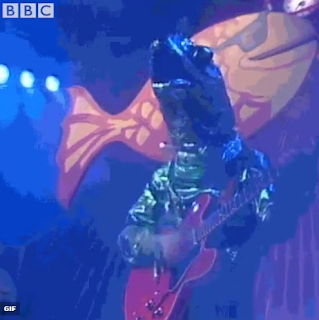 Tope of the Pops!

Shakatak – “Down On The Street” (33)
With what was to be their second and final top ten hit, indeed their final top 40 hit, when it peaked at number 9.

Neil – “Hole In My Shoe” (5)
Nigel Planer's character from The Young Ones, with his only solo hit, peaking at number two, just like the original by Traffic in 1967 ~ but why did it have to be cut from the 7.30pm showing!

Alison Moyet – “Love Resurrection” (13) (video)
Going to the holy land of course with this video, and the song duly rose to the occasion, and climaxed at number 10.

Echo & The Bunnymen – “Seven Seas” (26)
Singer Ian is joined by a penguin on drums and a fish on guitar to perform this third single from their top four album, Ocean Rain, and this shanty sailed to number 16.

The Bluebells – “Young At Heart” (14)
They'd seemingly raided the BBC waistcoat department earlier, with Young at Heart on its way to number 8 this time around.

Frankie Goes To Hollywood – “Two Tribes” (1)
Fifth of nine weeks at number one! And Relax was also at number 2!

The Jacksons – “State Of Shock” (20) (audience dancing/credits)
Together with Mick Jagger, taken from their top 3 album Victory, this single peaked at number 14.

Tina and Russell do the Pony Step!

Top of the Pops Loud and Clear

This edition of Top of the Pops features both Mike Smith and Jimmy Savile and so won't be shown on BBC4. So a huge thanks once again to Neil B for making it available here at WeTransfer 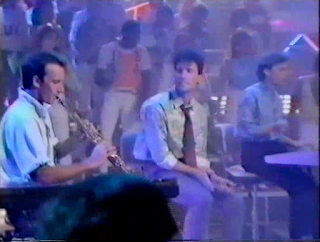 Sitting down on the job....

Thompson Twins – “Sister Of Mercy” (28)
Their run of top ten hits had come to an end, but this one almost got there, peaking at number 11.

Prince – “When Doves Cry” (21) (video)
His breakthrough hit in the UK, and the first of sixteen top ten hits when it reached number 4.

The Pointer Sisters – “Jump (For My Love)” (6) (audience dancing/credits)
At its peak.

Top of the Pops Resurrection

It's 28th June 1984, the lights are bright, there's a warm feeling all around, a sense of energy fills the air, and is that the sound of angels singing......? 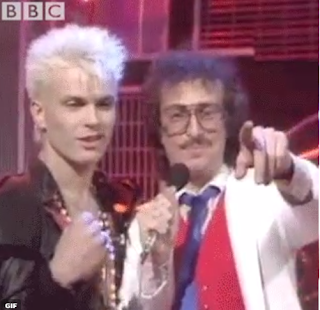 The Bluebells – “Young At Heart” (36)
Getting us underway this week is a song that will get to number one nine years later! But for now they had to settle for a number 8 peak.

The Human League – “Life On Your Own” (29)
Phil has gone all stubbly faced for this second single from their top 3 album, Hysteria, which made it to number 16.

Bob Marley & The Wailers – “Waiting In Vain” (33) (video)
This song originally peaked at number 27 in 1977, this time around it got to number 31. Re-released to promote his huge number one greatest hits album, Legend.

Billy Idol - turns up now to tell Steve Wright that he is looking for 'somewhere to rock and roll.'

Tina Turner – “What’s Love Got To Do With It?” (40) (video)
With perhaps her most celebrated song, which was also her joint biggest hit, peaking at number 3.

Alison Moyet – “Love Resurrection” (28)
Making her solo debut following the demise of Yazoo, this was the first of six top ten hits for Alison, this one peaking at number 10, and taken from her number one album, Alf. 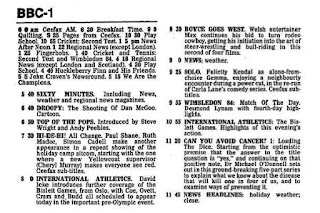 July 5th should be next, but with Jimmy Savile and Mike Smith hosting, BBC4 will skip along to the 12th instead.
Posted by Angelo at 12:49 67 comments:

Top of the Pops After Time

BBC4 will not be showing the edition of Top of the Pops from June 21st 1984, presumably because the opening act is Gary Glitter, though why they couldn't edit him out is a mystery, so a huge thanks once again goes to Neil B for making it available here at 4shared 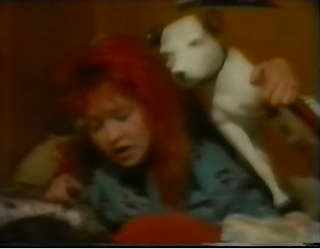 Gary Glitter – “Dance Me Up” (48)
One of his many come backs, this one quite successful compared to many others, peaking at number 25.

OMD – “Talking Loud & Clear” (23) (video)
Despite the minor video malfunction this made it to number 11.

Cyndi Lauper – “Time After Time” (36) (video)
Our blog title song makes its debut, and it looks like we won't ever get to see it on BBC4, the only other show its on is fronted by Jimmy Savile and Mike Smith!

Associates – “Those First Impressions” (44)
No hit for two years, and this one went up just one more place.

The Pointer Sisters – “Jump (For My Love)” (24) (video)
Hugh Grant would be dancing to this nearly twenty years later, but for now it peaked at number 6, and was the sisters' final top ten hit.

Frankie Goes To Hollywood – “Two Tribes” (1)
Second of nine weeks at the top.

Change – “Change Of Heart” (19) (audience dancing/credits)
Their first hit for four years was also their final top 30 peaking at number 17.

Well praise be, it's June 1984 already, and it's paradise for 8.5 million viewers and another edition of Top of the Pops! 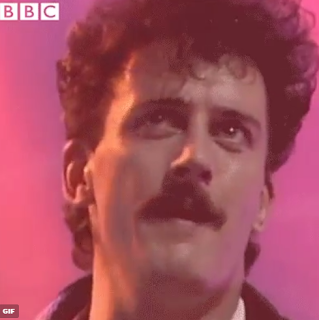 The Art Company – “Susanna” (20)
Yosser Hughes gets the show underway this week it would seem, with the Art Company's only hit, which peaked at number 12.

The Smiths – “Heaven Knows I’m Miserable Now” (10)
Hearing aid in, blouse on and bush in back pocket, but this song just would not go any higher in the charts no matter how silly Morrissey dressed.

Scritti Politti – “Absolute” (33)
This follow up to Wood Beez peaked at number 17.

Ozzy Osbourne – “So Tired” (21) (video)
Looking like the disturbed lovechild of Barry Manilow and Kim Wilde in this crazy Phantom of the Opera video, Ozzy took So Tired up one more place.

Nik Kershaw – “I Won’t Let The Sun Go Down On Me” (18)
Became Nik's biggest hit when it just failed to make it to number one.

Frankie Goes To Hollywood – “Two Tribes” (1)
And here's the song that stopped it, introduced of course by Mike Read, straight in at number one for the first of an incredible nine weeks.

Michael Jackson – “Farewell My Summer Love” (15) (audience dancing/credits)
Cashing in on his success, this 'long lost' recording of his peaked at number 7. 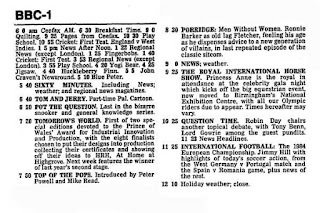 It should be June 21st next, but that show is being skipped, possibly because the opening act is Gary Glitter, so BBC4 will show June 28th next.
Posted by Angelo at 13:10 35 comments: