Top of the Pops Takes it All

I'd just like to give a huge thanks to Stephen Murphy, Alan Fish and the team for all the effort and great work they have invested to recreate all nine strike editions of Top of the Pops from the summer of 1980. We missed out on so much all those years ago but now I feel we have had an ample taste of what those missing shows might have been like. 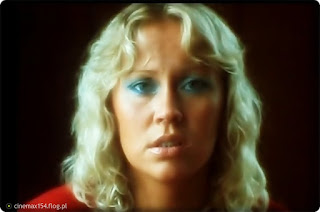 (9) ABBA – Winner Takes It All
Next week's number one.

(7) DEXYS MIDNIGHT RUNNERS – There There My Dear
At its peak now.

(6) BOB MARLEY & THE WAILERS – Could You Be Loved
Could get no higher than number 5.

Oops Upside Your Top of the Pops

As we reach this bumper penultimate edition and Stephen Murphy's 'strike' episodes of Top of the Pops, the charts are beginning to take on a look that we were familiar with when the show returned  to our screens on August 8th.... 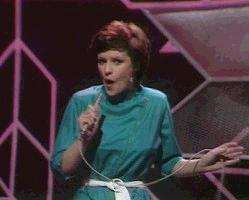 Only two more weeks to go and then it really is the Big Time!
Top of the Pops 24th July 1980
Hosted by Mike Read and Tommy Vance
http://l.facebook.com/l.php?u=http%3A%2F%2Fwww.4shared.com%2Fvideo%2FPCuU9Gv4ba%2FTOTP_24_07_80.html&h=0AQH8b4Vc&s=1
(17) YELLOW MAGIC ORCHESTRA - Computer Game
This one hit wonder chart run down tune was now at its peak.
(50) BODYSNATCHERS - Easy Life
The follow-up to Lets Do Rock Steady which got no higher than 50.
(8) DIANA ROSS - Upside Down
On its way up towards the top two.
(9) ROLLING STONES - Emotional Rescue
A big leap up the charts this week but number 9 proved to be its peak.
(21) BAD MANNERS - Lip Up Fatty
This is the way to get lots of appearances on the show, have yourself a very slow climber.
(23) GIBSON BROTHERS – Mariana
With their final top 20 hit, and a little help from Legs & Co.
(14) CHANGE - A Lover's Holiday
The first of two Legs & Co routines on this week's show, with Lover's Holiday now at its peak.
(38) JOHN FOXX - Burning Car
His third top 40 single of 1980, all narrowly missing out on a top 30 place, though his album Metamatic did make the top 20.
(33) TOM BROWNE - Funkin' For Jamaica
This would become Tom's only UK top ten hit.
(22) BLACK SABBATH - Neon Knights
At its peak.
(19) THE GAP BAND - Oops Upside Your Head
A big summer hit, and their first of two top tenners, though they would have to wait another six years for the second one!
(25) HOT CHOCOLATE - Are You Getting Enough of what Makes you Happy
The follow-up to No Doubt About It, this one reached 17.
(12) DEXYS MIDNIGHT RUNNERS - There There My Dear
Still heading towards the top ten.
(26)  WHISPERS - My Girl
This 70's style cover of the Temptations song was already at its peak in the charts.
(29)  SHEENA EASTON - 9 To 5
Fresh from appearing on the Big Time tv series and straight into the top 30 as a result.
(31) NEW MUSIK - sanctuary
This proved to be the band's final hit, and like their previous single it fell just one place short of the top 30.
(1) ODYSSEY - Use It Up Wear It Out
The second Legs & Co routine this week as Odyssey knock Olivia and ELO off the top of the chart.
(5) BOB MARLEY & THE WAILERS - Could You Be Loved
Playing us out is Bob Marley who had just got as high as he could with this song.

I'm Not Your Top of the Pops

Although not included in our Game, here's Alan Fish's 'pilot 2' edition for July 17th 1980, the first time the team have put together a 'new style' Michael Hurll episode, which as you can appreciate involves a higher level of complexity than putting together the Robin Nash ones....... 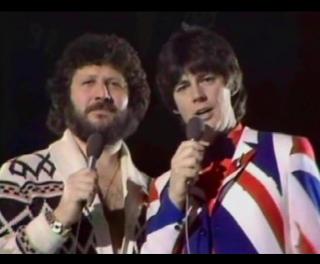 Top of the Pops Rescue

On July 9th 1980 the BBC made a 'new style' Top of the Pops pilot which was of course never broadcast, but this week Stephen Murphy and his team have come up with what an 'old style' edition might have looked like had it gone out on Thursday the 10th of July 1980...... 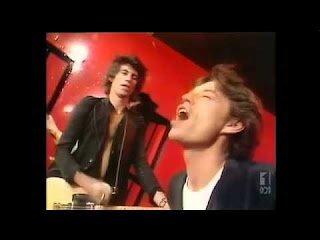 Oh no no no, I can't get no Top of the Pops!
Top of the Pops 10th July 1980
Hosted by Peter Powell
http://www.4shared.com/video/DShkocWmce/TOTP_10_07_80.html
(5) DETROIT SPINNERS ~ Cupid
Over the charts this week is the final top ten hit for the Detroit Spinners.
(44) THE VAPOURS ~ News at Ten
Their follow-up to Turning Japanese was not so successful, getting no higher than 44.
(24) DARTS ~ Let's Hang On
A breath of fresh air when we first saw them towards the end of 1977, but less then three years later they seem tired and old hat with their final hit of note.
(14) SAXON - 747 (Strangers In The Night)
This one flew to just one place higher in the charts.
(20) ROLLING STONES - Emotional Rescue
The title track from their number one album, this was to become their penultimate top ten hit.
(18) JOY DIVISION - Love Will Tear Us Apart
Their only top 20 hit, peaking at 13 in the charts.
(22) LEO SAYER – More Than I Can Say
Almost made it to number one for Leo, this was also his penultimate top ten hit.
(7) UB40 – My Way Of Thinking
Peaked at 6.
(2) ODYSSEY – Use It Up And Wear It Out
This one just had to be the Legs & Co routine!
(16) KATE BUSH – Babooshka
The second of three singles from her number one album, Never Forever. This would also be her last top ten hit for five years.
(11) PAUL McCARTNEY – Waterfalls
The second single from his number one album, McCartney 2, peaked at nine in the charts.
(30) THE UNDERTONES – Wednesday Week
The follow-up to their biggest hit, My Perfect Cousin, became their second biggest hit when it made number 11.
(45) DEXY’S MIDNIGHT RUNNERS – There There My Dear
The follow-up to Geno peaked at number 7.
(1) OLIVIA NEWTON-JOHN & ELO – Xanadu
The first of two weeks at the top of the charts for Olivia and ELO.
(29) CHANGE – A Lover’s Holiday
Playing over the credits is the first of two top 20 hits for Change in 1980.
Posted by Angelo at 06:57 29 comments: