Top of the Pops is Big Leggy

Very many thanks to D42 for making the edition of Top of the Pops 26th August 1982 available here on vimeo. It is not being shown on BBC4 even though the host has now completed his sentence. 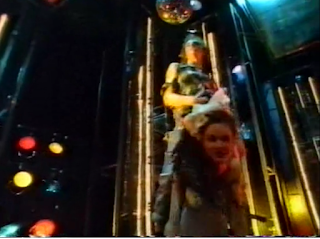 Well bugger me, another yewtreed show!

(11) HAYSI FANTAYZEE – John Wayne Is Big Leggy
The slightly controversial song was now at its peak.

(28) SHAKIN’ STEVENS – Give Me Your Heart Tonight
Like John Wayne and his oversized leg, this Shaky tune also peaked at number 11.

(42) DAVID CHRISTIE – Saddle Up
His only top ten hit peaking at number 9.

(30) STING – Spread A Little Happiness (video)
From the movie Brimstone and Treacle, this was Sting's first solo hit, reaching number 16.

(19) ROCKER’S REVENGE – Walking On Sunshine (danced to by Zoo)
Strolled its way to number 4 in the charts.

(20) GARY NUMAN – White Boys And Heroes (video)
He's gone back to his pre-fame white hair here, but the song got no higher in the charts.

(9) TOTO COELO – I Eat Cannibals
Went up one more place.

(1) DEXY’S MIDNIGHT RUNNERS with THE EMERALD EXPRESS – Come On Eileen (video)
Final week at number one.


Next will be September 2nd hosted by Jimmy Savile.
Posted by Angelo at 09:17