Top of the Pops Pigeon

Tonight it's August 5th 1982 and Kid Jensen hosts another live edition of Top of the Pops, and once again we have a wonderfully kind fan of the show to thank for sending their own VHS copy to the BBC so that the Kid's links could be re-dubbed for broadcast! 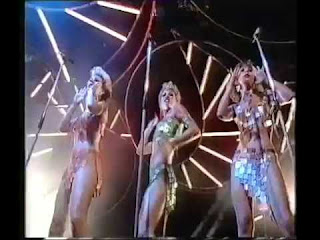 'A lovely bunch of coconuts!'

(4) MADNESS – Driving In My Car
Madness drive into the studio, sporting the white suits this week (I hope Kevin hasn't got a sour face later on) but this record had come to the end of the road of its chart run.

(25) JUNIOR – Too Late
Mr Live himself is here again tonight, and Too Late went up there more places.

(22) DONNA SUMMER – Love Is In Control (Finger On The Trigger)
Zoo go all Mad Max and strut their stuff while Donna's video plays on the big screen in the background, she still hadn't made it into the studio at this point, and this song became her first top 20 hit for three years, peaking at number 18.

(8) KID CREOLE & THE COCONUTS – Stool Pigeon
Here's the aptly named August with his exceptionally sparkling coconuts, albeit with some slightly weird dance moves, and this terrific party tune went up one more place.

(21) BAD MANNERS – My Girl Lollipop (My Boy Lollipop)
Keeping the party going, in their own special manner, with what would soon become their final top ten hit when it reached number 9.

(11) THE STRANGLERS – Strange Little Girl
Another studio performance helping this tune up to number 7.

(1) DEXY’S MIDNIGHT RUNNERS with THE EMERALD EXPRESS – Come On Eileen ®
The first of four weeks at number one.

(29) SURVIVOR – Eye Of The Tiger (crowd dancing) (and credits)
And we end the show with Zoo springing back onto the floor to dance to the tune that would eventually replace Eileen at number one.