Do You Really Want to Top of the Pops Me?

Another bumper Top of the Pops-athon week begins with this John Peel hosted edition from September 23rd 1982, which was originally watched by 9.4 million viewers, making it the sixth most popular show on BBC1 this week..... 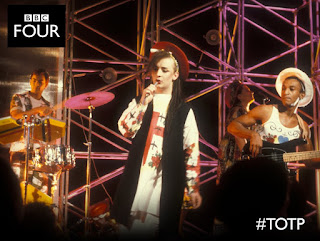 No, I'm not the bloke from Haysi Fantayzee!

(9) DAVID CHRISTIE – Saddle Up
Despite getting out his muscular biceps, David couldn't push Saddle Up any higher.

(17) FAT LARRY’S BAND – Zoom (video)
Their breakthrough hit also turned out to be their last when it peaked at number 2. I don't know if this was filmed especially for Top of the Pops, but it did feature a live vocal, and a bit of backing vocal from Fat Larry himself, on the drums.

(18) DEPECHE MODE – Leave In Silence (video)
A video inspired it seems by the Generation Game, for a tune now at its peak.

(26) MUSICAL YOUTH – Pass The Dutchie (video)
About to rocket to number one. John Peel seemingly a very big fan.

(38) CULTURE CLUB – Do You Really Want To Hurt Me?
Making their debut on the show (although we did see Boy George last year dancing in the audience) with a song that would become the first of two number ones for this legendary 80's band.

(36) DOLLAR – Give Me Some Kinda Magic
Went up two more places and then we didn't see them again for another five years. And edited out of the early broadcast tonight.

(22) CHICAGO – Hard To Say I’m Sorry
After almost six years since we last saw Chicago with their number one If You Leave Me Now, they return to the charts and peaked at number 4. And what an excellent dance routine from Zoo couple Libra and Leo. They would definitely get a 'ten from Len' I think.

(1) SURVIVOR – Eye Of The Tiger (video)
Final week at number one.


The next edition is September 30th 1982, s special show to celebrate 15 years of Radio One ~ but it features Jimmy Savile so won't be shown on BBC4. What would Jockey Wilson say?
Posted by Angelo at 12:28