Be Loud Be Proud (Be Top of the Pops)

What a year 2016 has turned out to be, with the passing today of yet another much loved pop star, this time the wonderful Greg Lake. At least we still have the Top of the Pops re-runs, and here we are now at October 21st 1982, with a show that was seen by 10.35 million viewers when first broadcast. 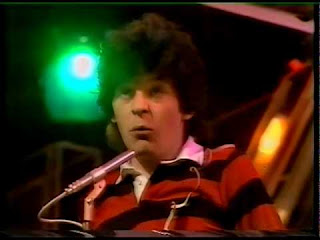 Has anyone seen Gnasher?

(37) THE PIRANHAS feat. BORING BOB GROVER – Zambezi
It looks like the inhabitants of Beano Town have been let loose in the studio tonight, covering this 1956 Lou Busch top two hit, which became the second and final hit for the Piranhas, peaking at 17.

(3) KIDS FROM FAME – Starmaker (video)
They look so happy now, don't they? But the song got no higher in the charts.

(35) TOYAH – Be Loud Be Proud (Be Heard)
A colourful performance from Toyah here but the song went up just five more places.

(31) KOOL & THE GANG – Ooh La La La (Let’s Go Dancin’)
In the studio looking very kool in matching suits with what became their biggest hit of the year, making it to number six.

(18) BAUHAUS – Ziggy Stardust ®
An entire band of Bowie impersonators, with a cover that sounds almost identical to the original, although Bowie himself never released this song as a single. It went up three more places.

(20) SHAKIN’ STEVENS – I’ll Be Satisfied (video)
Shaky and his exuberant fans take over the Shaftesbury theatre as he performs this Jackie Wilson cover which then peaked at number 10.

(1) CULTURE CLUB – Do You Really Want To Hurt Me? ®
The first of three weeks at number one.

(9) KID CREOLE & THE COCONUTS – Annie I’m Not Your Daddy (crowd dancing) (and credits)
On its way to seriously challenge for that number one spot.


It's (almost) Halloween again next with the edition from October 28th 1982.