Together in Top of the Pops

And so we reach the point where October 2017 reaches out and takes the hand of Top of the Pops from October 1984. 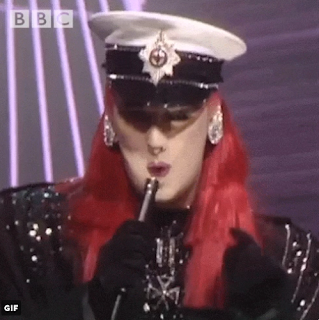 Boy George shows off the ear rings he borrowed from Sade

Bronski Beat – “Why?” (6)
Bronski Beat get the show underway with Why for a second time but it got no higher than number 6.

The Cars – “Drive” (15) (video)
Speeding into the charts with their first top 30 hit for five and a half years, Drive would initially park at number 5, but a year later it would emotively re-enter and peak at number 4.

John Waite – “Missing You” (38)
Last seen on show with The Babys over six years earlier, this American number one hit peaked at number 9 over here, and was his only solo hit. Edited out of the 7.30 showing.

Giorgio Moroder & Philip Oakey – “Together In Electric Dreams” (21) (video)
From the movie Electric Dreams, it peaked at number 3 and was Phil's only top 40 hit away from the Human League. Also edited out of the 7.30 showing.

Culture Club – “The War Song” (3)
This first single from their number 2 album, Waking Up With the House on Fire, went up one more place to also peak at number 2.

Paul McCartney – “No More Lonely Nights” (28) (video)
Taken from his movie and number one album, Give My Regards to Broad Street, this single famously featured Dave Gilmour on guitar and peaked at number 2. Another victim of the 7.30 chop.

The Stranglers – “Skin Deep” (32)
They were just about the last punks standing by now, and Skin Deep made it to number 15.

Adam Ant – “Apollo 9” (13)
Despite giving it full throttle, he couldn't get this one any higher in the charts.

Stevie Wonder – “I Just Called To Say I Love You” (1) (video)
Fifth of six weeks now at number one.