I Just Called to Say Top of the Pops

Pick up the receiver and don't hang up because it is 6.55pm on September 6th 1984 and Top of the Pops is calling you! 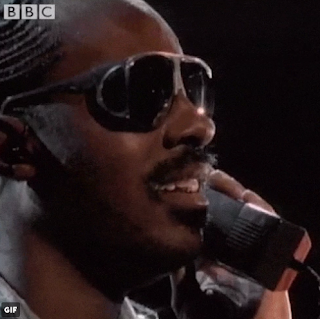 I hope this isn't a reverse charge call, Stevie!

Bucks Fizz – “Talking In Your Sleep” (21)
Getting the show underway this week, after being cut short last week due to a train, and the song went up to number 15.

Spandau Ballet – “I’ll Fly For You” (9) (video)
Not quite sure what was happening in this video, but the song flew no higher.

Sister Sledge – “Lost In Music” (32)
This song had peaked at number 17 five years earlier, but now this remixed version did much better and became their third of six top ten hits when it got to number 4.

Alphaville – “Big In Japan” (11)
A second studio appearance and the song went up three more places.

Stevie Wonder – “I Just Called To Say I Love You” (1) (video)
Not the most imaginative videos this one ~ perhaps he could have at least made a giant plasticine sculpture of Lionel Richie's head? The first of six weeks at number one for Stevie.

Next up should be September 13th with Bruno Brookes and Dave Lee Travis ...... so BBC4 will skip to September 20th instead.
Posted by Angelo at 12:57