If Top of the Pops Happens Again

This edition of Top of the Pops from September 27th 1984 will not be shown on BBC4 because it features Mike Smith. So many thanks to Gia, and here it is on WeTransfer 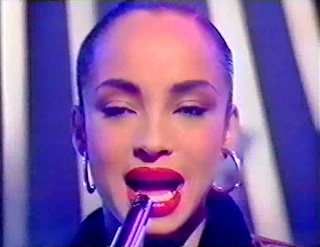 Sade shows off what she won in last year's Christmas cracker

Sade – “Smooth Operator” (29)
The third single from her number 2 album, Diamond Life, and it reached number 19.

Big Country – “East Of Eden” (27)
From their number one album, Steel Town, this single reached number 17.

Stevie Wonder – “I Just Called To Say I Love You” (1) (video + brief interview)
Fourth of six weeks at number one.

Ray Parker Jr – “Ghostbusters” (2) (audience dancing/credits)
Couldn't quite make it to the top.