What I Got is Top of the Pops

The edition of Top of the Pops from September 29th 1983 will no be shown on BBC4 due to one of the hosts being DLT, so once again a huge thanks goes to Neil B for making it available here at WeTransfer 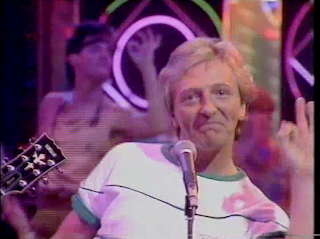 Black Lace – “Superman (Gioca Jouer)” (29)
A live vocal and the first of three top ten hits for Black Lace, this one peaking at number 9.

Jonathan King – US chart rundown: From LA.
Naked Eyes – “Promises Promises” (video clip)
Air Supply – “Making Love Out Of Nothing At All” (video clip)
Men Without Hats – “The Safety Dance” (video clip)
Billy Joel – “Tell Her About It” (video clip)

Unique – “What I Got Is What You Need” (27)
Zoo are let loose for the very last time but could not help this song get any higher.

Public Image Ltd – “This Is Not A Love Song” (15) (audience dancing/credits)
Another band having their biggest hit, this one peaking at number 5.