Top of the Pops Summer 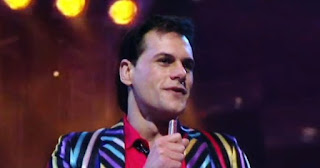 I think my band are somewhere in lost luggage......

KC & The Sunshine Band – “Give It Up” (19)
Jetting in to start the show and with his eyes already on the number one spot.

Depeche Mode – “Everything Counts” (26) (video)
Surely one of their best singles, but it only peaked at number 6.

Elvis Costello & The Attractions – “Everyday I Write The Book” (30)
A second performance of this song which went up two more places.

The Creatures – “Right Now” (29) (video)
Quite an exotic video here for this Mel Torme cover with Souxsie as Cleopatra for what was their biggest hit reaching number 14.

The Lotus Eaters – “The First Picture Of You” (25)
Janice needs to hold the mic a bit closer I think, either that or I'm going hard of hearing! Here she introduces the Lotus Eaters and their only top 30 hit, but what a good one, peaking at number 15.

Malcolm McLaren – “Double Dutch” (4) (Dynamos skipping)
Went up one more place. But edited out again of the 7.30pm showing ~ somebody at BBC4 doesn't like this one!

Robert Plant – “Big Log” (31)
His biggest solo hit, peaking at number 11. Also edited out, and yet Elvis Costello and Bananrama, who we saw last night, were both left in.....

George Benson – “Feel Like Makin’ Love” (28)
Flick Colby's Zoo are released from their cage for a routine, but this record got no higher.

Bananarama – “Cruel Summer” (10)
They've all had their hair done in the same style, ready for a trip to New York to shoot the video, and the song went up two more places. 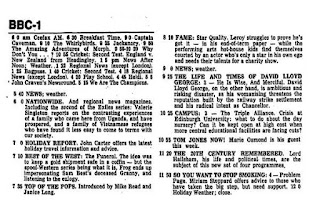