We Are the Top of the Pops

There is a time when we should hear the certain 25th April 1985 edition of Top of the Pops! 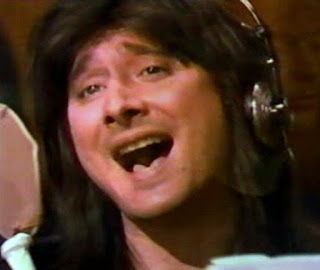 We are the ones you've never heard of..

Bronski Beat & Marc Almond – “I Feel Love” (7)
A somewhat awkward looking and slightly self-conscious performance to get the show underway this week. Maybe Jimmy knew that this would be his final single with Bronski Beat? It peaked at number 3.

The Rah Band – “Clouds Across The Moon” (6)
Set '2000 years into the future' according to Mike Read, but it went no further up the charts.

USA For Africa – “We Are The World” (1) (video)
It's not as bad as I remembered it. Everyone jostling for the mic and desperately trying to out sing each other is even quite amusing!

Vikki – brief interview ~ This year's Eurovision entry didn't get much of a showcase tonight! Despite her confidence, her song Love Is came fourth, and peaked at number 49 in the charts. Mike Read sounded like he just couldn't care less!

Steve Arrington – “Feel So Real” (20) (audience dancing/credits)
His only top ten hit which peaked at number 5.

May 2nd is next and it's yet another Mike Smith one.
Posted by Angelo at 12:53